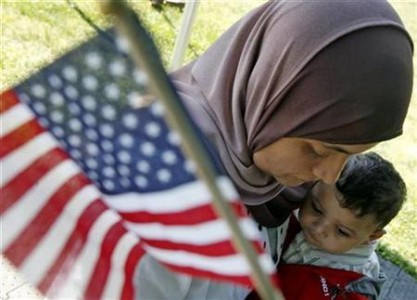 Muslim Americans deserve a break. There are as many as 6-8 million Muslims living in the United States, where they have been contributing to the country as doctors, engineers, artists, actors and professionals.

However, for a decade now, many have found themselves and their religion wrongly equated with the acts of terrorists such as Osama bin Laden. Many have been the victims of fear, suspicion and prejudice, Muslim-bashing, unlawful surveillance, illegal search, arrest and imprisonment.

Efforts to build Islamic centres and mosques in New York, Wisconsin, Kentucky and Tennessee have been equated with building monuments to terrorism. Prominent American public figures and politicians – including Bill O’Reilly, Sarah Palin, Congressman Peter King and Newt Gingrich – have openly spoken against Muslims and encouraged unfounded social suspicion of those in the community. The net result is an increase in anti-Islamic and anti-Muslim statements and actions, witnessed in the hysteria that has led to the movement across some 20 states in the United States to ban Shariah (Islamic principles of jurisprudence).

Today’s historic changes, the assassination of Osama bin Laden and the Arab Spring, offer an opportunity to redress anti-Islamic and anti-Muslim bias, or Islamophobia, and to reaffirm that Muslim Americans, like other mainstream Americans, simply desire a secure and democratic America. And this despite the fact that Muslim Americans for years have had to explain that neither they – nor their religion – sanction terrorism.

Major polls have consistently shown positive American public views of Islam plunging. The furore over the proposed Islamic centre (Park 51) in New York City revived hostility toward Islam and Muslims. According to the Pew Forum on Religion & Public Life, large minorities said they could not think of anything positive to say about Islam. In one study, 38 per cent of Americans had an unfavourable view of Islam, compared to 30 per cent with a positive view. Another study conducted by The Washington Post found that an unfavourable image of Islam was creeping up to 49 per cent among Americans.

This fear and hostility has been reinforced by the American public’s basic ignorance and misunderstanding of Islam. For example, the Pew Forum’s September 2010 survey of religion literacy found that only about half of Americans know that the Quran is the holy book of Islam. It also found that less than one third know that most people in Indonesia – the world’s most populous Muslim nation – are, in fact, Muslim. What many did know and fear were stereotypes of Muslims based on misinformation.

Mainstream Muslim Americans have too often been equated inaccurately with terrorists and people who reject democracy. Muslim Americans cherish the freedoms guaranteed by the U.S. Constitution as much as others and, as the Gallup World Poll of 35 Muslim countries reported, like all Americans, majorities of Muslims globally desire democracy and freedom, while they fear and reject religious extremism and terrorism.

Failure to recognise and appreciate these facts continues to feed a growing Islamophobia in America that threatens the safety, security and civil liberties of many Muslim Americans. And this is the case despite the fact that, as Gallup and Pew polls have shown, the members of the community are as educationally, economically and politically integrated as other Americans.

It is time to remember and act on the words of the former president, George W. Bush, in calling upon all Americans to distinguish between the religion of Islam and the fraction of Muslims who commit acts of terrorism. So, too, should we recall President Barack Obama’s words reminding Americans that: “[T]he U.S. is not – and never will be – at war with Islam … Bin Laden was not a Muslim leader; he was a mass murderer of Muslims. Indeed, Al-Qaeda has slaughtered scores of Muslims in many countries, including our own.”

It’s time for Americans to turn a deaf ear to their preachers and politicians of hate and get it right with their American Muslim fellow citizens.