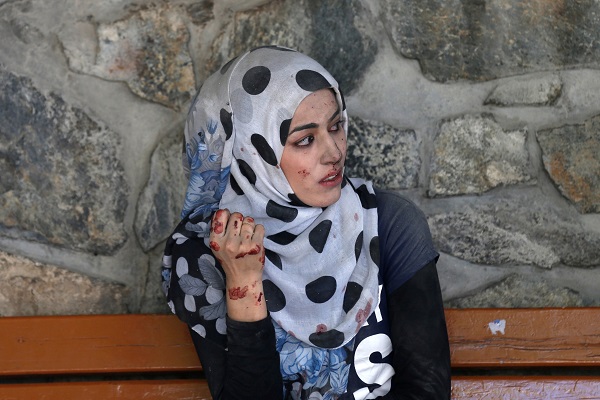 ATTENTION EDITORS - VISUAL COVERAGE OF SCENES OF INJURY OR DEATH A woman sits outside a hospital after a blast in Kabul, Afghanistan May 31, 2017.REUTERS/Mohammad Ismail

Picture this: You wake up in the morning to hear your wife screaming at you because it’s pouring rain outside. She hates the rain and now her day is ruined because of you. You go downstairs only to hear your children yell at you because they broke the toaster. They can’t have waffles now and it’s all your fault. On the way to work, you stop and fill up gas only to hear everyone at the gas station curse you out because gas prices have risen. You arrive at work only to see all your coworkers gathered around your desk demanding that you apologize for the printer being jammed. On the way home from work, everyone on the highway screams at you because they are upset with the rush hour traffic.

I am a proud American, raised in Texas. I’m a college student. I’m a humanitarian. I’m an aspiring physician. I’m someone who hopes to revolutionize access to medicine and healthcare in the United States and in war-torn countries across the world. I also am a M-u-s-l-i-m, one of over 1.6 billion who are blamed whenever an act of terrorism occurs as if we are nothing more than this 6-letter word hijacked by those who wrongly use our religion to justify their heinous crimes.

As a Muslim American who continually strives to do everything I can for the betterment of my community and this nation, I am tired of being asked to apologize and condemn terrorism that I have absolutely nothing to do with.

1) It’s ridiculous to ask us to apologize.
As a practicing Muslim, I know that my religion teaches peace. I am so certain of this fact that I will award anyone $10,000 if they can find me a verse in the Quran that says it’s ok to kill innocent people or to commit acts of terror. This is an open offer that will never expire.

This being said, why should I have to apologize for a violence that I have no connection to? A violence my religion blatantly stands against.

Unless you can find that $10,000 verse or unless you blatantly hear a Muslim explicitly supporting terrorism, please understand that asking us, both individually and collectively, to apologize for terrorism would be just as ridiculous as the questions above.

And frankly, if you don’t already believe that Muslims condemn terrorism by now, then no apology or repeated broken-record condemnation from any Muslim or Muslim organization will help cure your intolerant hatred.

Muslims want to defeat terrorism just as much as any other American, if not more. This is why we have Muslim women like Niloofar Rahmani and Kubra Khademi who are at the very frontlines fighting terrorists. This is why millions of Muslim youth are taking a stand against ISIS. This is why tons of Muslim groups and scholars repeatedly issue statements condemning ISIS, many even being beheaded by ISIS for doing so.

This is why more than 120 Muslim scholars from around the world joined together to write an open letter to ISIS, denouncing them as un-Islamic by using Islamic terms. This is why Muslims are being killed by ISIS for publicly opposing this terrorist group’s persecution of Christians.

There is a sad irony in how Muslims are the largest victims of terrorism yet also receive the most hatred for it. Just as it would be wrong to blame African Americans for slavery, starving children for world hunger, and toddlers for school shootings, it is equally wrong to blame Muslims for terrorism when we are always the victims of it.

Want me to call the leader of ISIS and tell him to stop committing terror? Give me his contact information; I’d be happy to. Any Muslim would. But just know that the conversation would begin with us, ISIS’s largest victims, telling him to stop hijacking our religion to justify killing Muslims who actually follow it.

5) If we have to apologize for terrorism, then so should everyone else.
This last point is especially important. Why are Muslims the only group that are required to apologize for and condemn the actions of criminals that associate with their group?

You must understand that just as you are detached from the heinous crimes mentioned above, I am just as detached from the terrorism that so many keep trying to link me with for no other reason than me being a Muslim.

You must understand that by asking me whether I condemn terrorism, you are questioning my humanity.