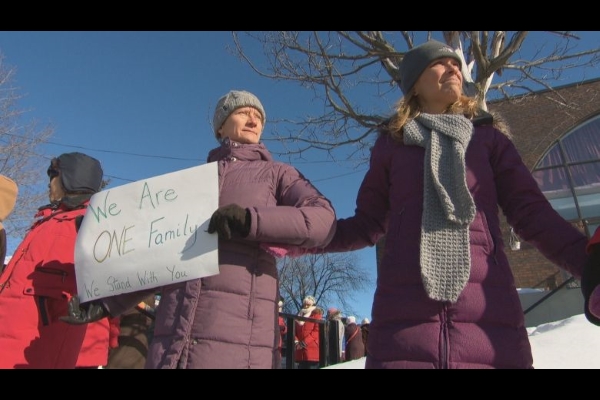 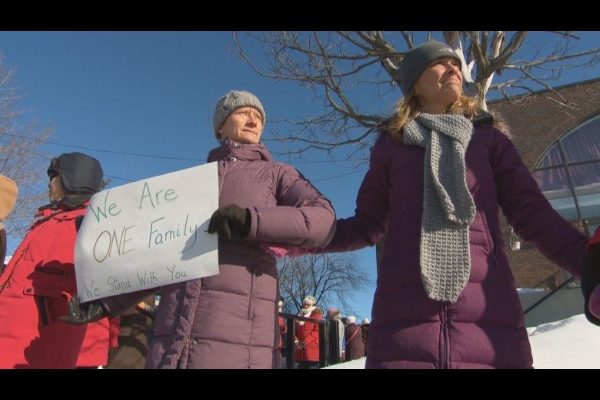 Dozens of people formed a protective “human chain” around the Ottawa Mosque during Friday prayers as a demonstration of support for the Muslim community after the deadly shooting in Quebec City.

Imam Samy Metwally said it was a condemnation of racism, Islamophobia and division.

“It gives us … hope because it’s a sign of unity, which is real Canada,” Metwally said.

Similar demonstrations were organized for Friday in response to last Sunday’s shooting at a mosque in the Quebec City suburb of Ste.-Foy. Six people were killed and 19 people were injured. Thousands attended a funeral for three of the victims in Quebec City today.

The Champlain Park Community Association helped organize the event and is encouraging residents to report any suspicious activity near the mosque.

“I have lived in this community for 30 years and been involved with the Ottawa Mosque and really, we want to make sure that we would never have anything like this happen here,” said Carol Arnason, who speaks for the community association.

Wafia Hammoud, an organizer at the mosque, handed out cookies and treats to the people who had surrounded the mosque.

“When I see these people, I cry,” Hammoud said. “I hug everybody because it makes me very happy they’re standing up for us.”

Hammoud said children have been afraid to attend the mosque since they learned of the Quebec City attack.

Ade Sadik attends the Ottawa Mosque and was encouraged by the show of support from Canadians of various backgrounds.

“This just reaffirms my conviction in the country and that we all stand for what is right,” said Sadik, who is originally from Nigeria. “I am moved by the solidarity.”

Andrea Prazmowski, who lives near the mosque and helped organize the event, said the chain was meant to symbolize an “embrace.”

“We want them to know that they’re not alone and for every act of hatred we need to have hundreds and hundreds of acts of friendship and love,” she said. “We have to just drown out the hatred.”