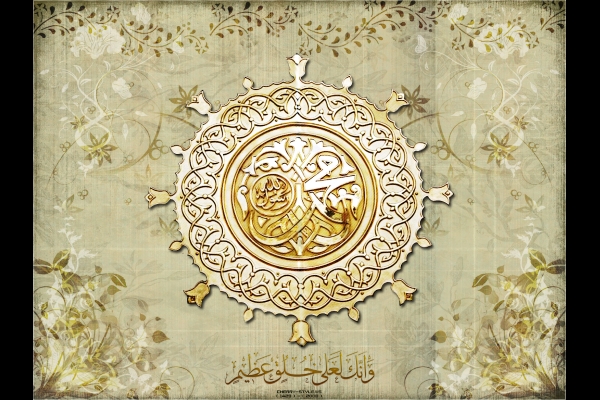 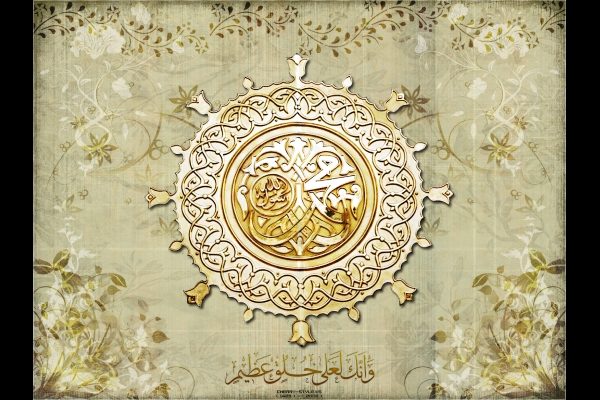 The Messenger of Allah, upon him be peace and blessings, is a Radiant Lamp (siraj al-munir) before all humanity, or a lamp of eternity illuminating all darkness.

He, may Allah bless him and grant him peace, is a wonder of the art of the Divine power becoming manifest in humankind. He is the most perfect criterion and the nonpareil exemplar presented to humanity.

In the words of a verse from the Qur’an, he is a Prophet who has been sent “as an unequalled mercy for all the worlds…” (See Qur’an 21:107)

That is to say, Allah Almighty bestowed him, upon him be peace and blessings, as a mercy upon all creatures, animate or inanimate – upon stone and soil, river and sea, the earth and heavens, time and space, and in particular, upon humankind.

Were it Not For Him

Humankind has attained the boundless ocean of the All-Merciful’s grace and forgiveness by virtue of the love of our Lord towards the Prophet Muhammad (pbuh). As is stated in a Prophetic Tradition:

“When Adam, peace be upon him, slipped into the error (which led to his descent upon earth), he said, ‘O Lord, I ask You, for the sake of Muhammad, to forgive me.’

Allah the Exalted said, ‘O Adam, how do you know of Muhammad when I have not yet created him?’

He said, ‘O Lord, When you created me and breathed into me out of Your Spirit, I raised my head and saw written on the pillars of the Supreme Trhone, “There is no god but Allah and Muhammad is the Messenger of Allah,” and I knew that You would not attach to Your name any save the most beloved of creation to You.’

Allah the Exalted said, ‘You have spoken the truth, O Adam, for he is indeed the most beloved to Me of creation and as you have asked Me by virtue of him, I have forgiven you. Were it not for Muhammad, I would not have created you.’”(Hakim, Mustadrak, I, 672)

The True Day of Rejoicing

“Come, O heart, the true day of rejoicing is the day of reunion with Muhammad, as the light of the universe is from the light of his blessed existence.”

One who loves Allah and wants for Allah to love them must wholeheartedly obey the Eternal Pride of the Universe, as obedience to him is, in effect, obedience to Allah the Exalted. As is declared in a Qur’anic verse:

Again, as communicated in a Qur’anic verse, earning the love of Allah Almighty can only be acquired by way of love towards His Beloved Messenger:

“Say (to them, O Messenger): ‘If you indeed love Allah, then follow me, so that Allah will love you and forgive you your sins.’”(3:31)

It is declared in a Qur’anic verse:

“The Trustworthy Spirit brings it down on your heart, so that you may be one of the warners (entrusted with the Divine Revelation), in clear Arabic tongue.” (26:193-195)

That is to say, by descending upon the heart of the Messenger of Allah, the Qur’an found expression in his every state and manner and became imprinted on his words and actions, his conscience and consciousness, and upon every single corpuscle of his existence. In this way, the twenty-three year Prophethood of the Messenger of Allah, may Allah bless him and grant him peace, became manifested in the form of a living commentary of the Qur’an. Allah Almighty exhibited the Divine truths and virtues in his exemplary character. In this respect, the mysteries and wisdoms of the Qur’an can only be understood by means of benefiting from the spiritual tapestry of Allah’s Messenger, upon him be peace and blessings.

The only Prophet and the only human being throughout history about whose entire life each and every detail has been recorded is the Messenger of Allah, the Prophet Muhammad, upon him be peace and blessings. Only a certain portion of the exemplary behaviour of the Messengers in the chain of Prophethood  – each of whom served as a standard of leading humanity to truth and goodness – have been transmitted to our day. However, all the words, actions and even the inner world of the Prophet of the End of Time, upon him be peace and blessings, from the most simple to the most complex and finest, have been traced moment to moment and recorded in the form of an inscription of honour in the annals of history. What is more, by the special grace of Allah, these have been privileged with transmission from beyond the centuries all the way until the Last Day on earth.

The exemplary character, manner and morality of the Messenger of Allah, the Pride of the Universe and the leader of the Prophets, upon him be peace and blessings, resembles a boundless ocean, while that of the other Prophets is akin to the rivers pouring into it. He possessed all the distinguishing qualities and virtues, known and not known, of all the reported 124,000 Prophets who came before him and represents the epitome of noble character and attributes. Over and above the advancement of humanity in thought and manner of living until his era, he has been sent as the ‘Prophet of the End of Time’ who is to serve as the exemplar character to address their needs until the last day.

Indeed, the Messenger of Allah, upon him be peace and blessings, has said:

“I have been sent to perfect good character.”   (Muwatta’, Husn al-Khuluq, 8)

The Epitome of Noble Character

Implied in noble character is to take on, or emulate the character of the Messenger of Allah, upon him be peace and blessings. His character is confirmed and extolled in the Qur’an in the following words:

“You are surely of a sublime character, and do act by a sublime pattern of conduct.” (68:4)

As a matter of fact, when asked about the character of Allah’s Messenger, ‘A’isha, may Allah be well pleased with her, said:

Our Debt of Gratitude to Allah’s Messenger

Our love, respect and mannerliness towards the Messenger of Allah, may Allah bless him and grant him peace, our following his elevated Sunna and our being closely acquainted with him is a trial of piety and God consciousness for our hearts. (See Qur’an 49:3-4)

A heart that is not filled with feelings of gratitude before his struggle for the salvation and guidance of humankind from the moment of his honoured arrival to the world until his demise, is perhaps not be called a heart at all.

“O you who is Muslim today! Had it not been for the endeavour and noble ambition of Ahmad, upon him be peace and blessings, in destroying the idols, you would have now been engaged in idol worship just like your forebears.”

The Monument of Reliance and Surrender

The Messenger of Allah, upon him be peace and blessings, endured endless hardship and suffering throughout his life. He himself said, “…and I have been subjected to harm in the way of Allah, such that no one has been subjected.” (Tirmidhi, Qiyama, 34/2472) Indeed, he endured the greatest of suffering in being witness to the death of seven of his children. He was insulted and stoned at Ta’if. The torture and torment endured by the first Muslims grieved him greatly. His eminent Companions, his beloved uncle Hamza and Mus’ab ibn ‘Umayr first and foremost, were martyred. The most precious students of the Qur’an were entrapped and killed in the Bi’r Ma’una and Raji’ incidents.

But none of these tribulations were able to impair his stoicism and self-possession. He met all these in a state of great maturity and resignation. He paid no mind to any fleeting tribulation for the sake of earning the good pleasure and approval of His Lord. Despite his heart being seared with countless sorrows, he always had a smile on his face. No one would ever see him sullen face, scowling, or with a glowering countenance. Within the repose of togetherness with his Lord, he was constantly of cheerful countenance and used to reflect the smiling face of Islam no matter what the circumstances.

In short, Allah the Exalted rendered His beloved Messenger the most excellent example by putting him through the hardest of trials and tribulations in order for us to also maintain a state of reliance, surrender and resignation in the face of life’s bitter and sweet surprises, hardship, anguish and suffering.

Forever the Most Trustworthy, the Most Compassionate

Even those who denied the Prophethood of the Messenger of Allah referred to that Sun of Guidance with the honorific Al-Amin, the Trustworthy.  They affirmed the fact that he had never once lied. Even when fighting against him, they entrusted their most prized possessions to his care. They too benefited from his truthful, reliable and honest character. When the Makkan polytheists who had subjected the Muslims to a brutal boycott for three years themselves faced famine and hunger years later, they still took refuge beneath that Prophet of Mercy’s wings of beneficence and kindness.

He Always Kept His Word

The Messenger of Allah, upon him be peace and blessings, possessed such a state of steadfastness and truthfulness that even Abu Sufyan, who was one of the bitterest enemies of Islam at the time he had not accepted the Messenger’s Prophethood, responded to Byzantine Emperor Heraclius’ question, “Was he ever accused of lying?” saying, “Never. He always keeps his word.”

Even the Unbelievers Put their Trust in Allah’s Messenger

One of the bitterest enemies of the Messenger of Allah, Abu Jahl, and his friends, once said to him:

“O Muhammad, by God, we do not belie you, for you are the most truthful person in our eyes. Rather, we belie what you have brought to us.”

In this way, they outwardly rejected this truth that they accepted in their conscience, purely on the basis of their vain desires. Allah, exalted and glorified be He, revealed the following verse from the Qur’an and thus unveiled their wretched state:

“(O Messenger!) We know indeed that the things (lies, mockery, and slanders) that they say grieve you: yet, it is not you that they deny and give the lie to (they cannot very well call you a liar, since they themselves have called you ‘the trustworthy one’); rather, it is the signs and Revelations of Allah that the wrongdoers obstinately reject.” (6:33)