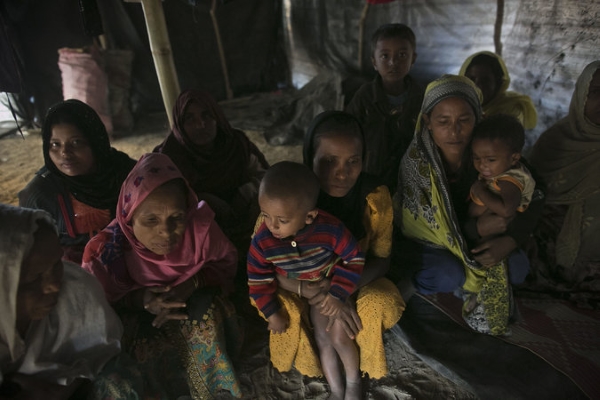 Myanmar’s security forces have committed mass killings and gang rapes of Rohingya Muslims and burned down villages since October in a campaign that likely amounts to crimes against humanity and possibly ethnic cleansing, according to the United Nations.

“The ‘area clearance operations’ have likely resulted in hundreds of deaths,” a report from the UN’s human rights office said, referring to a military crackdown launched  in the wake of an attack on a military post.

“She informed me that an investigation will be launched. She said that they would require further information,” he said.

The report, which was based on interviews with 204 Rohingya refugees who fled to neighbouring Bangladesh, recounted gruesome violations allegedly carried out by members of Myanmar’s security services or civilian fighters working alongside the army and the police.

Of the 101 women interviewed, more than half said they had been raped or sexually assaulted.

Several women told UN investigators how their young children, including a newborn, were trampled or cut to death.

Security forces were also accused of opening fire at people fleeing and burning entire villages, as well as of “massive and systematic rape and sexual violence; deliberate destruction of food and sources of food”.

Tun Khin, a Rohingya activist, told Al Jazeera that the international community now needed to change what he called a “soft approach” towards Myanmar’s government.

“Every day Rohingya are facing abuses and extrajudicial killings are going on,” Khin, who heads the UK-based Burmese Rohingya Organisation, said.

“The [UN Security Council] has to come up with a strong binding resolution to take action against the Myanmar government,” he said, adding that he was pushing hard for the issue to be tabled there.

The UN said it had reports of three children aged six or younger being “slaughtered with knives”.

“An eight-month-old baby was reportedly killed while his mother was gang-raped by five security officers,” the rights office also said, citing witness accounts.

“What kind of hatred could make a man stab a baby crying out for his mother’s milk,” UN rights chief Zeid Raad al-Hussein said in the statement. “What kind of ‘clearance operation’ is this? What national security goals could possibly be served by this?”

Fleeing over the border

The Rohingya, numbering about 1.1 million, are loathed by many among Myanmar’s Buddhist majority and live in apartheid-like conditions in the Muslim-majority Rakhine state in the north.

Yangon refuses to recognise the Rohingya as an ethnic minority, instead describing them as illegal immigrants from neighbouring Bangladesh, even though many have lived in Myanmar for generations.

The government’s own investigation into the violence found that the security forces had not carried out a genocidal campaign against the Rohingya.

About 66,000 people have fled from Rakhine to Bangladesh since the army launched a security operation in response to attacks on police border posts on October 9, the report said. The UN humanitarian office has recently put the figure at 69,000.

The UN report was issued in Geneva after the investigators gathered testimony last month from Rohingya victims and witnesses who fled the “lockdown area” in Maungdaw in Rakhine for Cox’s Bazar in Bangladesh.