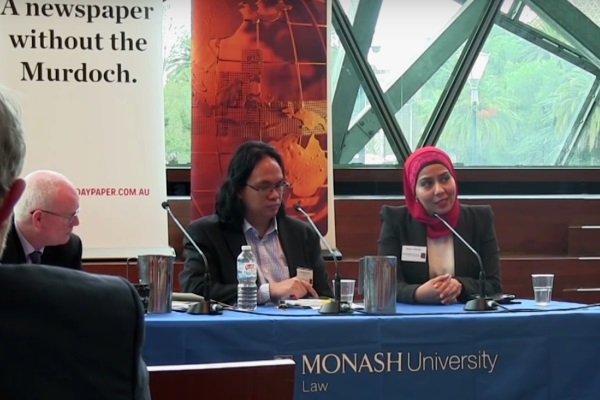 My relationship with Islamophobia over the years has taken my forms – from being an advocate against it, to becoming a victim of it and everything in between.

I stand before you today with a heavy heart. The past few weeks and days have been turbulent to say the least.

I do not want to delve into a doom and gloom discourse and I premise my discussion around this simple fact – if you haven’t walked my path, then your understanding of my circumstances is only secondary. You cannot flatly deny that which you have had the privilege not to experience.

Islamophobia is so broad though– and my message today is to those who perpetrate it, those who experience it and those caught up in the shadows of these two.

My message is for the powerful institutions and voices of influences striding in our corridors of power, on our airwaves and on our screens that consciously and unconsciously perpetuate it and act as the “enablers” of it.

And my message is to those who plant the seeds of Islamophobia and then benefit from the fruit it inevitably bears.

My message is also to the misguided backyard clerics who label themselves as “religious guides” – both the tangible ones and intangible ones referred to as Sheikh Google and Sheikh Youtube, that exploit young, impressionable souls, by exploiting our holy verses and mischievously leveraging on ‘Islamophobia’.

The diverse players sucked into this vortex many of whom, unwittingly, feed off each other, and yet simultaneously and passionately despise one another, I call the radicalised and the Islamophobes.

And my message is to those who find themselves on the fringes of society – those most susceptible to the messages and narratives of violent political ideologies, the young souls who feel so disenfranchised and so disillusioned that they feel compelled to turn to radical elements of a political, not religious, ideology that has conveniently wrapped itself in a religious cloak to gain legitimacy.

Please know this, the people whom you claim to be defending, representing and fighting for, are the very people who will suffer and face an enormous backlash every time you think you’re doing something to help “your cause”.

Let me remind you that whilst there are loud and vocal voices shouting down at us in this country which is adding to your sense of alienation, be assured that the silent majority, do not hate you. In fact, many speak out. They may not all understand you but do not lose hope and do not despair.

All is not doom and gloom. This is your home just as much as it anyone else’s. For some of us, it’s the only home we have ever known.

The utter irony is that all of the parties involved on each end of the extreme spectrum cling on to the false hope that their words and actions are actually tackling and thereby reducing endemic and institutionalised Islamophobia and global injustices (in the case of the young disillusioned souls, falling prey to radicalisation) or in turn, reducing and countering radicalisation, terrorism and/or the perceived Muslim threats (in the case of the islamophobes – both at an individual and institutional level).

But the reality is that their words and actions have the polar opposite impact to what they set out to achieve and instead contribute towards further fueling each other’s causes. Meanwhile everyone else is caught up in between.

These are by no means the only factors at play.  It cannot be ignored, however, that political ideologies prey on disaffection.

Whether it’s the very disaffection that makes voters nod to the empty, baseless words of politicians, that are void of logic, but somehow resonate with them, or the disaffection that pulls a young Australian Muslim man to the fringes of society, thereby making him vulnerable prey for the wicked minded – we cannot ignore this sense of disaffection.

No doubt, the consequences of the latter, are deadly. Yet while the hate and outrage of the former is not morally equivalent to the violence and mayhem of the latter, still there are undeniable parallels between the two sides whose activities and rhetoric reinforce each other.

Put simply, there are far too many disaffected and disillusioned people amongst us on both ends of the spectrum.

Australia is one big family and whilst these folks may seem like that distant cousin we would rather not engage with, ignoring them will not make them disappear into oblivion. Ignoring them, demonising and ridiculing them will only make them more emboldened, grant them martyr status and create bigger pockets of polarised and disfranchised people with devastating and long term consequences for our nation.

Think of a 12 year witnessing his mother being verbally abused, and then being called a terrorist at school, (say the day after Pauline Hanson appears on QandA), and then fast forward a few years and this same kid struggles to find a job because his name is Mohammed (we know this because there is research that shows that Australian Muslims have higher than average rates of education and lower than average levels of employment). Imagine as a young adolescent how that man will feel? And then contemplate on how it may be a lot easier to brainwash him into potentially joining groups who will promise him a job, brotherhood and a sense of belonging that his home country is not able to provide him.

We must, however, find the delicate balance of calling out the fabrications and hate speech without stooping to low levels of demonisation and dehumanisation by, for example, stereotyping all One Nation supporters as bigots- because not all 500,000k + people who voted for them fit that profile.

Indeed, research has shown us that feeling dehumanized by another group can lead you to dehumanise that group and that pattern of dehumanization and mutual aggression continues.

How is this relevant you ask?

When people like Sonia Kruger from the Today Show are able to so casually call for the banning of all Muslims entering our country, when national newspapers like The Australian publish comments from readers calling for the “internment of Muslims” (so throwing the whole Muslim population into detention camps), when political parties get elected into parliament almost exclusively on their anti-Muslim policy platforms, a process of dehumanisation is taking place.

Where nothing we say or do, no amount of facts or statistics, can sway certain segments from their hardline, wholly manufactured, views about us, a process of dehumanisation is taking place.

When you oppress me by sending me threats of death, violence and rape, simply because I speak out about the islamophobia that my community and I are facing, a process of dehumanisaton is taking place.

When the fears and safety concerns of your child become superior to those of mine, a process of dehumanisation is taking place.

And for the record, while it is not my job to enlighten you if you are so fixated in your belief that the sky is green, when it is indeed blue, there should be no onus on me to befriend each and every Islamophobe, in the same way that a victim of domestic violence need not befriend every misogynist.

I will not, however, merely write-off every person who speaks up against me, as a bigot. I have on many occasions engaged, privately with people who hate me, but are level-headed enough to carry out a conversation free from vitriol and hysteria. On the odd occasion, I helped changed some views and have helped soften some hearts.

This doesn’t mean that I will turn a blind eye to Islamophobia, or not challenge its historical constructs, or highlight the individuals and institutions that continue to act as enablers and plant seeds of hate – BUT my message today, to everyone, is that we must not and cannot retire into a state of despair. We must appeal to our best selves.

The bigots in the country – are the exception not the rule.

To those who not at the fringes of opposite sides of the spectrum I eluded to earlier, let us reach out to one another with a renewed and genuine intent to listen to each other – but to listen to understand and not just with an intent to fire off a reply.

Let the reasonable voices unite and let us expend our energies into trying to inject love and compassion into a world that is being increasingly filled with destruction and despair for the forces binding us together are stronger than the forces pulling us apart.

And when we lose hope, as I sometimes do, let us look down at the face of our future generations, reflect on their futures, reflect on our hopes and dreams, and pick ourselves up, dust ourselves off and light that damn candle again, for darkness cannot drive out darkness. Only light can do that.