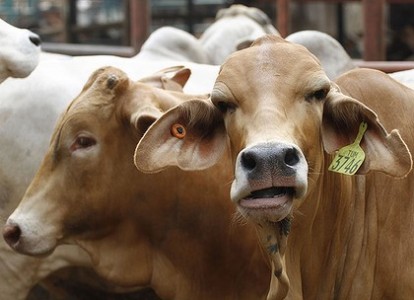 Television viewers reeled on Monday night as graphic images of Australian cattle being slaughtered in Indonesia went to air.

The ABC Four Corners program used footage captured by Animals Australia during its investigation with the RSPCA on how animals are killed after live transport. The methods, as Liberal MP Greg Hunt succinctly described them, were ‘unacceptable, extraordinarily out of touch with the modern world, and above all, cruel and inhumane’.

The response was immediate and intense. People tweeted, posted on Facebook, and contacted their MPs to vent their outrage. Online petitions against live export were soon inundated.

Members on both sides of Parliament were also disturbed, the issue drawing out a level of bipartisanship not seen in the last three years. Within two days of the Four Corners report, the Gillard Government imposed an export ban against 11 Indonesian abattoirs identified as operating below international standards.

The public outrage highlights the assumptions modern meat-eaters make about how food arrives on their table. Most of us purchase our proteins from the supermarket, where they sit on sterile shelves neatly packaged in uniform containers. We are disconnected from the bloody business of rendering a live organism into a form fit for cooking and eating.

This disconnection explains in part the horror that met the footage of slaughter in Indonesia. While people are generally comfortable with the idea of animals being killed for human consumption, they prefer to assume such animals are killed humanely.

In the age of mass-produced meat, this actually brings us close to older traditions that saw animals as precious and saw their death in the service of humans as noble. Native Americans asked for pardon and gave thanks to animals they killed. Jewish and Muslim traditions also take seriously the business of slaughter, prescribing a method that involves a speedy death and hence the least pain.

Modern animal rights activism has restored the philosophy of ethical slaughter. They have to some degree made us more aware of and careful about how food gets on our plate. In Australia, we see this in the increasing demand for organically produced vegetables and meat, as well as Fairtrade commodities.

But how much of such consciousness exists in Indonesia? Any improvements to animal welfare must begin from local support if it is to be concrete and permanent. Given that Indonesians are predominantly Muslim, perhaps an appeal to change must begin with an appeal to the concept of halal; a term that designates what is permissible under Islamic law.

There are complications here. Stunning, for example, is considered by the RSPCA to be the only humane option, because it renders the animal unconscious before it is killed. However this is precisely the point of resistance for local slaughtermen, because halal requires the animal to be conscious.

Yet the practices revealed in the Four Corners footage are certainly not halal. Dhabihah, the Islamic law that prescribes animal slaughter, insists on a swift severing of the jugular and carotid arteries with a sharp knife. The video shows a white steer with a broken leg being goaded for 25 minutes to stand; its nose and eye are gouged and it is kicked several times before it is finally slaughtered.

Perhaps the $4 million investment spent by the livestock export industry over the past decade to improve animal welfare in Indonesia could have been better spent on managing the idea of halal.

In Australia, the reversible (electrical) stunning method is now part of the most common form of halal slaughter. Even in instances where ritual slaughter is allowed, wherein a sharp knife is swiftly used to sever the jugular and carotid arteries, a captive-bolt pistol is used immediately after.

These methods should have been promoted far more vigorously in order to bring Indonesian practices closer to international standards. Yet, in the 20 years that Australia has been involved in live export to Indonesia, only eight abattoirs of the hundred that receive Australian animals use stunning.

Indeed, most of the investment by the industry seems to have gone toward the design and implementation of restraining boxes seen in the Four Corners report, which did nothing at all to make death speedy and less painful for animals.