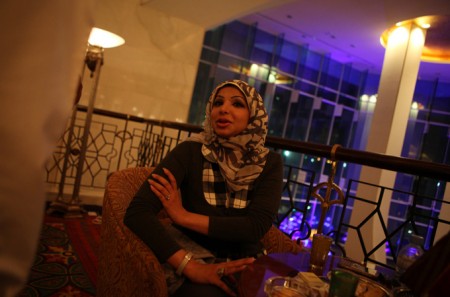 Lamees Dhaif tells Al Jazeera: “They can stop us from telling stories now, but they can’t stop us forever.”

Women and local journalists have long been at the forefront of the movement for change in the Arab world. Bahrain’s Lamees Dhaif is both, and for nearly a decade she has been an outspoken proponent of social justice in the small island nation.

Thirty-four-year-old Dhaif spoke to Al Jazeera in Doha this past weekend about her career as a journalist and the recent government crackdown that has silenced her and many others in the Gulf kingdom.

Dhaif described herself as a “golden child” when she entered journalism in 2002, saying she had “everything it takes” to be a great journalist. Since then, Dhaif has become one of the most recognised and controversial personalities in Bahrain’s media.

“I came with an aggressive approach to journalism,” she said. “In Bahrain, they try to avoid conflict in journalism; they don’t want to upset anyone. It’s a small society, so if you write about someone you’re going to upset his relatives.”

Dhaif, a Shia Muslim who comes from a “conservative” background, said: “I criticised the [Shia religious establishment] and I’ve been the target of my own people.”

“And then I started to target the powerful and the elite, someone had to say something.”

“For example, we have 21 sports unions in Bahrain, and the heads of 17 of them are members of the royal family,” Dhaif explained. “I asked, ‘why is the chairman of the swimming union so fat?’ I asked the same for the minister of health, ‘shouldn’t he be a doctor?'”

“In the beginning I was smart, a little bit spoiled. I wanted to prove myself. When I put my hand deeper in my work and went for the first time to the villages and saw poverty and injustice, I started to despise myself for thinking that working in the media was something that could make me a star.”

“I started addressing issues that made the powerful want to destroy me, I made many enemies,” Dhaif said.

Dhaif described the government’s campaign to ruin her reputation. Statements were made about her physical appearance and behaviour, claims she dismisses as rumours and attempts to “shrink” her in the conservative Gulf society.

Dhaif said these attacks backfired and “only made me more determined, and spreading the rumours made me more known”.

However, lately Dhaif has been silenced since the government imposed martial law to suppress a protest movement that began in February of this year.

Bahrain, a key ally of the US and home to its Navy’s fifth fleet, is controlled by a Sunni monarchy. Shia, who make up more than two-thirds of the population, lack rights and are excluded from most high-level political positions and the security forces.

The protest movement resembled those in Tunisia and Egypt which came before and succeeded in ousting the respective heads of both states. In Bahrain, protesters demanding change started their own Tahrir Square-like sit-in at Manama’s Pearl Roundabout, before they were forcibly removed. The government later destroyed the roundabout. 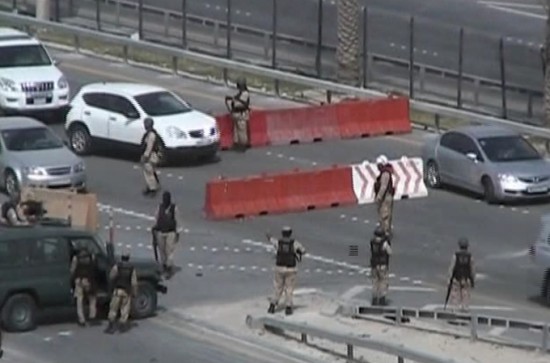 One month after protests began, the Bahrain monarchy imposed martial law and invited thousands of Saudi troops to help quell the uprising.

Since that time, more than 30 protesters have been killed and hundreds of protesters, human rights advocates, medical workers, journalists and others have been rounded up and imprisoned by the authorities. Rights groups have condemned the widespread detention and subsequent torture and abuse reportedly happening inside the prisons. At least four detainees have died in custody, and two have been sentenced to death. Amnesty International has condemned military trials in Bahrain as “politically motivated and unfair”.

Dhaif described how her family had come under threat for her work, and, encouraged by her relatives, she took a break from writing since martial law began. “I stopped [practicing journalism] because I didn’t want to be arrested. If I’m arrested now, how can I document the others in jail? Everyone is arrested.”

Since the crackdown began, many activists, journalists and others have gone into hiding to avoid arrest by authorities – which posted pictures of the “wanted” on various media outlets, including Facebook.

“We reached a point where we’re scared to even write on our laptops because it’s the first thing they take when they invade our homes. So, I keep all the stories in my head,” Dhaif said.

“They can stop us from telling stories now, but they can’t do it forever. Even the dead will tell their stories.”

The government and state media in Bahrain have portrayed the protest movement as sectarian and attempted to justify the crackdown by warning against Iranian influence in the country. In April, Bahrain’s foreign minister said that foreign troops would stay in the country to remove any “external threat”, that he associated with Iran.

According to Dhaif, in Bahrain, “there are some Shia who have a lot. And there are a lot of Sunnis suffering, but they’re scared to [act] because the government makes them scared of Iran”.

“The government says that the protesters want Iran [to control Bahrain] … it’s an old song that they’ve sung for decades. What the hell do we want with Iran? It is not a civilised government, it is a dictatorship. We wish a better life for the people in Iran.”

Unlike protests in other Arab nations, Dhaif contends that the majority of protesters in Bahrain do not want “isqat al-nitham” (to overthrow the regime), but rather reform and equal rights.

“Bahrainis are peaceful and intelligent people, and we deserve a modern country. We deserve to be treated as citizens and partners, not followers and slaves. We don’t want to rule, we don’t want their palaces, their thrones, their Rolls Royces and their jets, we just want to be treated with dignity.”

“If the government said ‘let us keep our thrones, and we’ll offer you the dignity you deserve’ the people would accept,” Dhaif said.

“If the government gives them real rights there would be no need to protest. [The government] should stop being so stubborn – they can’t change the people, but the people can change them.”