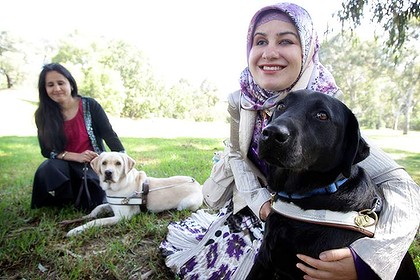 For blind Muslims Neslihan Sari and Karima Shirzad, fulfilling their wish for a guide dog meant navigating a cultural minefield.

They longed for greater independence but felt trapped by the Islamic prohibition on pet dogs, described in the teachings as ”unclean”. This led each on a critical journey through Koranic scripture – and into sometimes painful conflict with family members reluctant to welcome a dog into the fold.

”Having a dog was like a dream that was never going to come true,” said Afghan-born Ms Shirzad, who, like Ms Sari, owes her impairment to disease.

At first, her own fear of dogs held her back; later her family was the stumbling block.

”My parents were very supportive, but one of my siblings was at first not accepting … and said, ‘Why do you need a dog, everything will be unclean.’ … I got sick with anxiety and depression because [a dog] was my only hope and I felt like this was the end of me.”

The Islamic taboo surrounding dogs has been a source of consternation and controversy in recent times. In 2006, the Victorian Taxi Association appealed to the mufti of Melbourne to give religious approval for Muslim drivers to carry guide dogs, after a number of blind passengers lodged complaints of discrimination.

A year later, the Muslim Council of Britain said dogs could enter mosques. Meanwhile, a Muslim woman in Detroit reportedly opted for the alternative of a trained miniature horse.

Guide Dogs Victoria works to raise awareness in Muslim communities of both the legal rights of guide dog owners and the animals’ critical role in improving lives. A guide dogs seminar held in January for Victoria’s Board of Imams elicited an ”overwhelmingly positive” response, according to Brisbane-based trainer Bashir Ebrahim, himself a Muslim.

”Like many things, it’s a complicated issue,” he said. ”You’ll hear a diversity of views among Muslims … many interpretations of rulings are culturally rather than religiously based.”

After copious research, the Turkish-born Ms Sari came to the same conclusion.

”This prohibition has been grossly misinterpreted,” she said. ”There are a few Koranic references [to dogs] and there are differences of opinion among jurists and stuff. I did research on the fatwas [and] on new religious judgments – all say a dog is permissible if kept for a purpose, like, say, hunting and I feel I’ve got that.

”Some people do say dogs have jinn or evil spirit receptors, but … I think dogs have been victims of myths and medieval prejudice.”

Ms Shirzad agrees, as does her grandfather in Iran who sought advice from religious authorities. ”He said it [the dog] is OK because you need it, it’s like a prescription for you.”

Both women ultimately prevailed. Ms Sari’s mother gave her blessing after ”a bit of tears and arguments” and after a trainer brought around two dogs that impressed as placid and obedient. And as Ms Shirzad’s suffering intensified, her sibling’s resolve melted.

Ms Sari has had Labrador Sarita since July last year, while Tashi is Ms Shirzad’s second guide dog. Still, both women prefer to restrict the dogs’ movement inside the home.

Says Ms Shirzad: ”I live alone now, and after I moved in my father built Tashi a beautiful bedroom in a shed.”