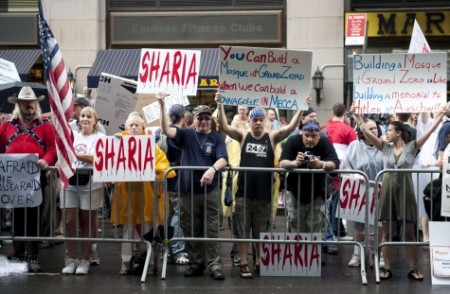 Why would anyone join an extremist Muslim fringe group that hates democracy and wants to impose a myopic interpretation of Islamic law on everyone? What could possibly attract an educated young man living in a free society to join a movement that glorifies suicide bombers?

These are questions that worry all sorts, from German chancellors to Camden locals, and drive an industry of Islamophobia. Whether it’s US blogger Daniel Pipes musing that President Barack Obama might be murdered by Islamists for being an apostate, Infidel author Ayaan Hirsi Ali describing Muslim women’s clothing as gradations of “mental slavery”, or outspoken Christian spokesman Patrick Sookhdeo questioning moderate Muslim leaders’ calls for peace and co-existence as Islamically-prescribed deception, they foster the worry that where Muslims live, violence and even terrorism follow. Understandable, given the Islamophobia industry makes its coin generating fear of Islam and Muslims.

It is Sookhdeo’s Christian charity, the Barnabas Fund, that is spear-heading a new campaign to boycott halal meat in Australia. “Say no to the Islamification of our food,” the website urges, and a petition has found its way into various Australian churches warning that the availability of halal food in big supermarkets ”may be interpreted as an assertion of Islamic supremacy”.

Sookhdeo, who is on a visit to lecture concerned Australians on such topics as ”the Islamisation of society”, argues that the problem is with Islam itself.

In his 2007 book Global Jihad: The Future in the Face of Militant Islam, Sookhdeo warns that ”non-violent Islam is like a cone balanced on its point; it cannot exist in that state indefinitely but is bound to fall, i.e. to give rise to violent elements.”

For Sookhdeo and his alarmist confederates, original Islam is inherently violent and any alternative reading by peaceable Muslims is either ignorance or dissimulation. His call for Islamic reform as a way to rehabilitate Muslims is disingenuous, for how can any such reformer escape the sinister accusation they are merely engaged in what Sookhdeo describes as taqiyya – a last-resort permission to hide one’s religious identity in the face of persecution.

There is no escape from this circular reasoning in which Muslims are urged to prove their loyalty to the nation-state, and upon presenting themselves as loyal are then accused of hiding their disloyalty.

It is precisely the futility some Muslims experience when faced with such fear mongering that contributes to what social psychologists tell us is a sense of ”blocked progress”. That is, while most Muslims can buttress themselves against prejudice, seeking support through various sources of well-being, a minority will seek maladapted solutions. Some turn to gangs and criminality; a small number will join militant religious groups that provide them with a sense of connection and identity.

As researchers in Britain, France and Australia have noted, “home-grown” members of militant groups do not generally possess a high degree of religiosity and knowledge of Islam before their radicalisation. Put another way, it is not religious Muslims we have to worry about, it is when ordinary Muslims feel trapped in limbo: they belong neither to their parents’ devout traditional cultures, nor to their Western host nations, which sends the message: Muslims don’t belong.

This explains, in part, why such groups have been able to recruit Western-born and educated young men to their ranks. It is not poverty that spurs their attraction to fanatical counterculture groups, but their sense (rightly or wrongly) that the broader society specifically targets and blocks them from achieving normal goals.

The good news is that we can cut the oxygen that fuels the flames of their fanaticism by actively countering anti-Muslim paranoia. It has been argued that fundamentalist religious groups lose their ability to competitively peddle their wares in societies in which there is religious freedom and the state ensures social services are provided to all – this means facilitating the settlement and integration of Islam and Muslims in Australian society. It is precisely because Islam is not inherently violent, as is demonstrated by the productive and peaceful lives that the vast majority of Australia’s 340,000 Muslims pursue, that permitting them to build and maintain the infrastructure of their communities – mosques, schools and businesses – alongside other religious and secular groups, will provide protection against violent extremism.

It is not that we should look to Europe in fear and anticipation, but that Europe should look to Australia’s model of proud commitment to multiculturalism and diversity.