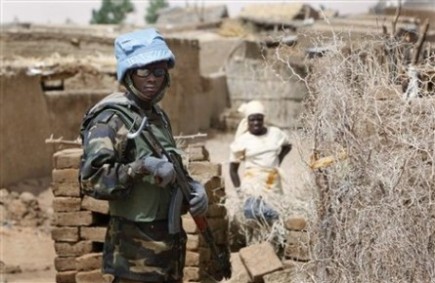 Libyan President Muammar Gaddafi’s use of African mercenaries to quell the uprising against his autocratic regime has revived a deep-rooted racism between Arabs and black Africans.

Though most will deny its existence, in Libya discrimination is common not only against migrant Black Africans, but also against darker-skinned Libyans, especially from the south of the country.

“Against this background, one needs to be a little wary of the accusations of ‘African mercenaries’ or even ‘Black African mercenaries’ that have been bandied around. Certainly, Gaddafi has used, in the past, mercenaries from other parts of Africa, and our information is that some of these are likely involved in the current situation on Gaddafi’s side,” Na’eem Jeenah, executive director of the Afro-Middle East Centre in Johannesburg, South Africa told IPS.

“Mercenaries, of course, are extremely useful because the regular army forces include conscripts — who can easily leave their posts and join the uprising. Mercenaries work for money and have no compunction about whom they kill.”

However, this is not the first time Libya’s most vulnerable immigrant population has fallen victim to racist attacks. In 2000, dozens of migrant workers from Ghana, Cameroon, Sudan, Niger, Burkina Faso, Chad and Nigeria were targeted during street killings in the wake of government officials blaming them for rising crime, disease and drug trafficking.

“However, it is also possible that many of those identified as ‘African mercenaries’ could be darker-skinned Libyans. It is easier for people to project their problems onto outsiders than on their own people,” adds Jeenah.

A case in point is Karim, an African-Lebanese. After a day of visiting relatives, he was traveling with his African mother on the bus back down to Beirut when the vehicle was stopped at a military checkpoint. Soldiers entered the bus and asked for everyone to show their identity papers. While he was searching the bag for his wallet to find his military standby card and identity papers, one of the officers in charge ordered his arrest.

Several hours in custody, Karim was subjected to countless physical and verbal abuse; not a single soldier even bothered to check his identification.

“It wasn’t until my mother shouted that they call a relative who is known in the military that the soldiers stopped mistreating me and checked my papers,” says Karim in an interview with IPS. “Even then they tried to save face by claiming that my military card was new though in fact it has been standard for over ten years.”

Experts argue that though a taboo subject, racism is not confined to Libya; it is found throughout the Arab world, and stems from historical linkages of the Arab slave trade to the way blacks were used during European colonization in the region.

In his study titled, ‘Perceptions of Race in the Arab world’, Mark Perry says: “The past and present trade in African slaves to the Arab world has left a long and bitter memory in African society to this day. Black Africa was the earliest source for slaves and the last great reservoir to dry up; already in the 640s slaves were part of the ‘non-aggression pact’ between Arab conquerors and Nubian rulers, while as late as 1910 slave caravans were still arriving in Benghazi from Wadai (in Chad).”

Scholar Elizabeth Thompson adds that French colonisation of Syria and Lebanon was charged with racial overtones due to the use of West African soldiers. “The Senegalese would become a regular target of nationalist propaganda in sexualised and racialised imagery that fused men’s gender anxieties with outrage at French domination.”

As the world marks the 2011 International Day for the Elimination of Racial Discrimination, which has been dubbed the ‘International Year for People of African descent’, uprisings sweeping the Arab region should include a social transformation to shift perceptions of dark-skinned Arabs and non-Arabs to put an end to racial discrimination and xenophobia, experts say.

Otherwise, they warn, a violent backlash by anti-Gaddafi forces in Libya who link black skin with the regime could lead to a massive genocide once the long-time leader is ousted.