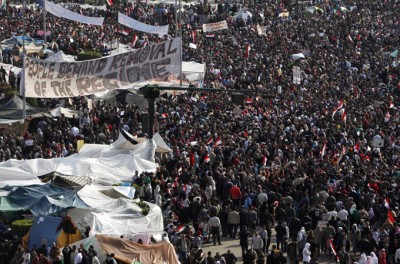 A regime is dying, the second in as many months in the Arab world. How the outside world looks at succession and how local people approach it will differ. The positive fact about change in Egypt and Tunisia this time round is that citizens of both countries are not beholden to the West.

These are home-grown popular uprisings that revitalized popular sovereignty and the will to choose. To aid this birthing, Western governments should do one thing: nothing at all, leaving dictators to face their moment of doom and leaving self-governing people to their own devices. Thus, democratic futures will ensue.

With the imminent end of Mubarak this year, whether in days or weeks, another Pharaoh is discarded to the dustbin of history. But who will lead Egypt to resume its status as a regional player?

The good news is that Egypt has a large pool of leaders, institutions, civic bodies and parties to facilitate a smooth and democratic transition.

Of the key contenders for power in the post-Mubarak era, one faction seems to be leading the pack.

Mubarak’s exit from power, unaided by foreign powers, will mark the triumph of an 82-year-old vision. The Muslim Brotherhood (MB) has always sparred with the state, in varying degrees of intensity – mostly peacefully but at times violently.

From the days of the monarchy and since the 1952 Free Officers coup, the MB has shadowed the state. Three presidents fought hard to limit, if not eradicate, its presence, sometimes with overt backing from secular forces. All three – Nasser, Sadat and Mubarak – have failed.

To the contrary, their tenacity in eliminating it has emboldened the MB’s own tenacity to stay the course, surviving its darkest moments in its confrontation with the state in the 1960s and 1970s. Nasser killed thousands of its members, including the ideologue and scholar Sayyid Qutb.

It is today the single most formidable, disciplined and popular civic organization in Egypt. It was founded in 1928 by Hassan Al-Banna, the man his followers call “Al-Shahid” or martyr. Westerners have been obsessed with Sayyid Qutb, especially since 9/11, but the most charismatic and political figure was Al-Banna.

The MB is older than the modern independent Egyptian state and despite having had a chequered history in its relation with the state, it has displayed stamina for survival, deep penetration within society, and long reach beyond Egypt’s borders, having maintained all kinds of international institutions and activities globally.

Egypt is a nation of greatness and it has produced other parties with historical pedigree and historical mission such as Al-Wafd Party. But Al-Wafd’s staying power pales in insignificance when compared with the MB.

No contender for power in post-Mubarak Egypt can bypass the Muslim Brotherhood, whether they rule as a majority through a direct democratic mandate or in coalition with others. If it does not rule in its own right, the MB is destined to be a king-maker. This is a role the MB has elevated to an art form, through four distinctive features that make MB unique:

First, it has a wide pool of cadres, seasoned politicians, and leaders. They are all coached in endless struggles with the authoritarian state. The largest class of victims of state brutality are MB members. Rarely one finds an MB leader without an experience of internment and/or torture. This is true of Al-Banna’s generation of founding fathers during the formative years as well as of the current fourth generation of brotherhood members.

It is no exaggeration to state that the spiritual training MB members receive prepares them well for the trials of these experiences. Often MB members leave prison with university degrees and debate skills obtained whilst in Abu Zo’bal, Torra or Al-Sijn Al-Harbi. They are busybodies in society as much as in prison.

The MB is a jama’ah or society that interpenetrates with Egyptian masses in all locales – rural and urban. No single political party in Egypt has their reach. Their skill in recruitment, mobilisation and organisation rival the state. In many instances, they prove their worth in replacing the state either in welfare and health provision or in institution-building. Many of the first NGOs were created by the MB. They have vast networks, incorporating both youth and women. The MB’s female branch is larger in membership than entire political parties in many Arab states. Such members are undeclared for protection from security services within and without Egypt.

Should it form a political arm, through a licensed political party, it will have no problem winning large shares of seats in both chambers of the Egyptian parliament.

Second, the MB has social networks, making it versatile and able to partake in non-political activities. This activity has empowered it to build roots deep into Egyptian society and fronts that enable it to reinvent itself and rebuild quickly after periods of dormancy or confrontation with the state.

Third, the MB is adept at building bridges with non-MB publics. They have fingers in all kinds of pies – social, cultural, and political. This has given the MB two reliable sources of support. A permanent rank-and-file following committed by virtue of membership and activism, and a changing but wide public of sympathizers. These are white and blue-collar as well as ordinary citizens, including in rural and tribal areas.

Finally, the MB does its politics both below and above the state. It embodies bottom-up reticulation. It has also global networks. Thus the MB combines a capacity, with attendant know-how, which can suit the locale and is at the same time attuned to globality. Its presence is felt in the villages of the Upper Nile, as well as in Palestine.

It has a long tradition of producing charismatic leaders with oratory skills. The MB will not face problems as who to endorse for high office or for ministerial assignment. Its dilemma will be over whom to include and exclude.

Essam Al-Arian is one such leader, having led since his days at university in representative councils, membership of Egypt’s parliament, and internal MB institutions. He is only one notable example, and dozens like him abound in the MB – from Abd Al-Mounim Abou Al-Foutouh to Jamal Hishmat or Al-Katatina. They are all in their fifties and all talented professionals whose names will not go away whatever the outcome post-Mubarak Egypt.

Egypt has been since the days of Nasser an on-going political workshop in coaching leaders. Endless names are to be found, and many luminaries and no wonder that the few Arab Nobel Laureates come from Egypt.

The former head of the UN’s atomic watchdog has the charisma and moral courage to lead. Despite old age, nearing 70, he can be a reliable figure around whom wide consensus can be built. However, even he will have to win the MB’s endorsement. He is already ahead of the game and his relations with the MB are solid, even if it has seen disagreements during the November 2010 elections. ElBaradei, the Nobel peace laureate in 2005, is a world statesman and can be expected after a lustrous career in international diplomacy to command trust in the international community, especially amongst Israel’s friends, who want a pair of safe hands to steer the ship of government in Egypt through the unchartered waters of the transitional period.

It would not be surprising at all if the contender for high office comes from the army – a care-taker type figure during the first term after Mubarak’s departure. Egypt’s army has historically enjoyed wide respect and following. It has remained professional and largely un-involved in policing the civilian population. So it has no blood on its hands. This is a plus. Thus far the country’s three presidents have come from the military, not to be dismissed as a source of recruitment for high office.

Egypt is of importance to the big powers and the US and Israel will naturally favour a president who comes from this institution. Irrespective of rhetoric, stability is the chief value for which the US and Israel will continue to clamour. Omar Suleiman’s Achilles heel is twofold: old age and close association with unpopular Mubarak policies, especially on the Palestinian front. Post-Mubarak Egypt will see a change in the dynamic of bilateral relations with Israel – whether in the way Gaza is treated or with the sale of gas to Israel.

The former Al-Ghad Party leader was ousted from his position of leadership with questionable machinations provided by the now discredited ruling NDP. Nour has made his imprint on Egypt’s politics through a principled stand against the Mubaraks and the authoritarian state. He has credibility and legitimacy to aspire to be a president. Like ElBaradei, he has limited popular following. He obtained close to 10 per cent against Mubarak in the 2005 presidential elections. As the first runner-up, one can assume his share of the vote to have been conveniently downsized by the powers that be. Unlike ElBaradei, he has the advantage of youth.

Although banished to the Arab League to eliminate a potential contender for the presidency, 74-year-old Amr Moussa qualifies as a transitional presidential figure. His age is his main handicap but he makes up for that with a wealth of political know-how. In the transitional period, especially if the army decides to shun politics, Moussa can maximize the pool of civilian options.

There is likelihood that all these figures may be pooled in a unity government or parliament and never make it to the presidency. The MB has always harboured the idea of a consensual nationalist figure serving in the office of president in a scenario of immediate departure under unforeseen circumstances. It would not be surprising at all for the MB to endorse a widely acceptable and neutral nationalist figure such as Ahmed Zowail, the 1999 Nobel Laureate in Chemistry, to be president. There are others also who may qualify for this role, especially as the intention post-Mubarak would be to weaken the presidency and shift the bulk of power to the parliament.