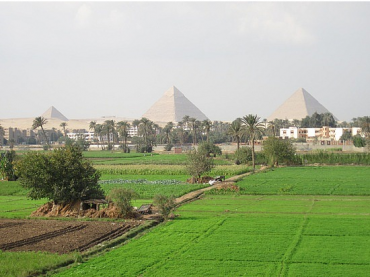 There is a lot more behind Hosni Mubarak digging in his heels and setting his thugs on the peaceful protests in Cairo’s Tahrir Square than pure politics. This is also about money. Mubarak and the clique surrounding him have long treated Egypt as their fiefdom and its resources as spoils to be divided among them.

Under sweeping privatisation policies, they appropriated profitable public enterprises and vast areas of state-owned lands. A small group of businessmen seized public assets and acquired monopoly positions in strategic commodity markets such as iron and steel, cement and wood. While crony capitalism flourished, local industries that were once the backbone of the economy were left to decline. At the same time, private sector industries making environmentally hazardous products like ceramics, marble and fertilisers have expanded without effective regulation at a great cost to the health of the population.

A tiny economic elite controlling consumption-geared production and imports has accumulated great wealth. This elite includes representatives of foreign companies with exclusive import rights in electronics, electric cables and automobiles. It also includes real estate developers who created a construction boom in gated communities and resorts for the super-rich. Much of this development is on public land acquired at very low prices, with no proper tendering or bidding.

It is estimated that around a thousand families maintain control of vast areas of the economy. This business class sought to consolidate itself and protect its wealth through political office. The National Democratic Party was their primary vehicle for doing so. This alliance of money and politics became flagrant in recent years when a number of businessmen became government ministers with portfolios that clearly overlapped with their private interests.

Mubarak presided over a process in which the national wealth passed into a few private hands while the majority of the population was impoverished, with 40% living below the poverty line of less than $2 a day, rising rates of unemployment, and job opportunities for the young blocked. In the last few months of 2010, Egyptians protested for an increase of the minimum monthly wage to less than $240, but the now departed Nazif government decreed that less than $100 was sufficient as a basic income. This, at a time when the prices of food staples and utilities tariffs increased at very high rates. Indeed, as one local economist asserted, every single commodity and service cost significantly more under the Nazif government – which is the government of business that ended progressive taxation and replaced it by a single unified income tax.

Additionally, public social services underwent masked privatisation, taking health and education beyond the reach of vast segments of the population. Many poor families were forced to give up the hope of educating children and had to send them to do menial work to contribute to the income of the household. There was little public investment in most services, and in infrastructure such as roads, water and sewerage. In the 2000s, Egypt witnessed numerous demonstrations by ordinary people across the country for the construction of overpass bridges on fast roads and for clean water in towns and villages.

The legitimate social and economic demands of the people were repressed and denied, and the regime used the police to control the population. Under emergency laws, the police acquired extensive powers and engaged in surveillance and monitoring of the population. Torture and abuse in police stations became routine. Police roadblocks and checks were part of the daily reality of Egyptians. Under the generalised corruption, the police engaged in extortion and offered their services to private interests.

Egypt was governed as a private estate. Mubarak’s immediate family is implicated in crony capitalist activities as partners of most of the businessmen who benefited from the regime’s corruption. These beneficiaries do not want to leave their palaces, beaches and resorts, lucrative businesses and extreme riches. These are fixed assets that could not be transferred outside the country – although it should be noted that the ruling elites have siphoned off much capital to foreign banks. Nonetheless, it is the country-turned-private-estate they do not wish to abandon – that’s why they deployed the thugs in Tahrir Square to terrorise the population. This is a tactic that the National Democratic Party has used on many previous occasions. In the national elections to the people’s assembly and to the shura council, thugs are hired to intimidate voters and to support rigging the results. At all popular protests, the police set thugs to attack the protesters using all means of intimidation, including the sexual harassment of women participants. Thugs have become an arm of the police and they have been used as informants in popular quarters of the city. They are rewarded with licences to operate kiosks or run minibus services. In a sense, practices of thuggery have been adopted by the regime to maintain itself and protect the interests of the ruling elite for decades now. Facing the growing possibility of losing their illegitimately acquired wealth and power, the regime and its cronies resorted to the techniques and practices that they have previously used with impunity to silence all opposition and resistance. However, the magnitude of popular mobilisation and the resolve to fight for dignity and freedom have rendered the regime’s tactics obsolete.