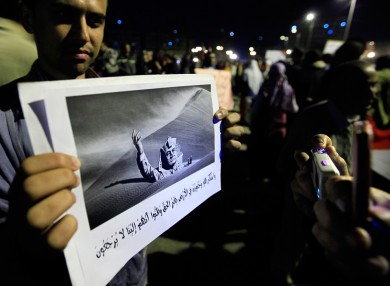 Hundreds of thousands of  Egyptian protesters gathered in Tahrir Square to celebrate what they believed would be President Mubarak’s resignation. Instead, his defiant televised speech left many angry or in tears.

Protesters in Tahrir Square react as Egyptian President Hosni Mubarak announces that he will not step down on Thursday.

One of the greatest street parties Egypt has ever seen, with at least 100,000 people packed into Cairo’s Tahrir Square chanting, singing, and insisting that this would be a day they’d remember for the rest of their lives, suddenly ground to a halt.

At around 10:45 pm local time, President Hosni Mubarak went on national television after a day in which the country’s senior military gathered in conclave for only the third time in the country’s history and came out with a statement that lacked strong support for the embattled leader.

During the day a senior member of Mubarak’s ruling party hinted that he would resign, and NBC and Al Jazeera cited unnamed sources as saying Mubarak would be gone by the morning.

The boisterous crowd hushed, thousands of heads cocked in quizzical listening fashion as they strained to catch Mubarak’s droopy voice, made spectral by the crackling and echoing sound systems.

Mubarak insists he must soldier on

As Mubarak went on, the crowd began to stir and share disbelieving looks. Tears began to quietly stream down a young woman’s face. Spontaneously, men began to take off their shoes and lift them in the air at Mubarak, a symbol of extreme disrespect and contempt in Arab culture.

A young man stands listening, his hands clasped behind his head and an expression on his face like the home team has just had a sure victory snatched away in the dying seconds of a match.

By the time Mubarak, the old general, reached the point in which he insisted he had to soldier on to save the nation from chaos, the crowd erupted in angry shouts of “Illegitimate! Illegitimate!” that drowned out the rest of his speech.

In the corner of Tahrir where this reporter stood, at a tented encampment for protesters, two men were racked with sobs and uncontrollable rage, fighting off by-standers’ attempts to restrain them. They lashed out kicking and straining, knocking over tents and dealing glancing blows to their friends.

A calmer protester explained that one had lost two brothers in the battle for Tahrir against thugs sent by the police on Jan. 28, the other just one.

“That man is a murderer, he brought the chaos,” shouts a third named Farhat, slightly calmer, who also lost a relative that day. When asked for his last name he angrily shakes his head. “The time for talking is over,” and then urged the crowd around him to confront the Presidential Guard, an elite unit that answers to Mubarak, guarding the nearby state radio and television building.

That wasn’t going to happen tonight. The massive crowd, most of whom were there for the celebration of a revolution, not the hard work of securing it, began to thin out even before Mubarak was done speaking.

The speech itself might has well have been a carbon copy of the one Mubarak delivered a week ago – which helped spur the protests on to greater heights, and included an almost identical line about the need to remain in power to save the country from chaos.

The one new wrinkle was his statement that he “saw fit to delegate the authorities of the president to the vice president,” but that didn’t impress the demonstrators. Omar Suleiman, the man Mubarak named as his first-ever vice president two weeks ago, has already been carrying out most of the duties of the executive since then.

“We’re just running in circles, with more empty words, this is just a game to them,” says Maria Hussein, at Tahrir with her mother, both fighting back their anger. “They’re buying time so they can save their system.”

Now the hardcore of the protesters are bracing for tomorrow, which had all the makings of the biggest day of protest yet before Mubarak’s speech tonight. There was plenty of rage in Tahrir Square tonight, but also a tremendous and enervating letdown.

There are rumours among the protesters that a march will be made on the presidential palace tomorrow (there have been such rumours in the past that have come to nothing) . The volunteer doctors and pharmacists are stockpiling bandages ahead of what they fear could be another day of violence.

And meanwhile Suleiman, the former spy chief and trusted aide to Mubarak, insisted in remarks after the speech that the protesters should go home.

“Two hours ago we were crying tears of joy,” says Shadi Hassan, a protester from the city of Mansoura, who’s been on the square for a week. “Now it’s tears of sorrow. Tomorrow, it will be anger.”