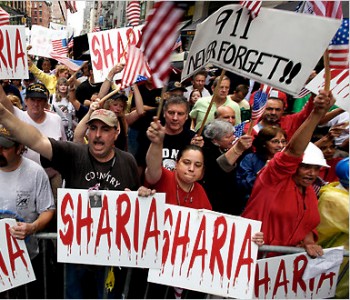 Nine years after Sept. 11, 2001, America saw perhaps its worst outbreak of Islamophobia since the attacks. Experts wagered it came from the aimless fear and the anger people feel in times of economic crisis, exploited by certain politicians looking to give their party an advantage in the midterms and turned toward American Muslims.

Such an outbreak was possible in the days and months after Sept. 11’s attacks. It never really materialized, experts say, in part because President George W. Bush stood up and told the nervous country that Islam is a religion of peace, and that American was not at war with Muslims.

He made no such appeal this year, and President Obama’s pleas fell on deaf ears or, more accurately, ears that believe Obama himself is secretly, and sinisterly, Muslim.

Without further ado, then, is This Year in Islamophobia:

When an imam — a known moderate imam who’d been sent by the U.S. government around the world on goodwill missions to Muslim nations — and a group of developers decided to turn the old Burlington Coat Factory building in downtown Manhattan into a community centre and mosque, almost no one noticed. No one noticed for months, in fact, until all of a sudden, this summer, it exploded.

People like Pamela Gellar and Robert Spencer, who for years had been screaming about the dangers of Islam from the fringe, were suddenly front and centre. Their assertions — that American Muslims are inherently dangerous, that the majority of imams are radical, that Imam Feisal Abdul Rauf is a terrorist sympathizer — were suddenly being repeated by the mainstream, by Newt Gingrich, Sarah Palin and the like.

People said vicious things, calling the community centre a shrine to terrorists and salt in an American wound.

The furore came to a head on Sept. 11, the ninth anniversary of the attacks, when protesters from both sides converged on the site, just a few blocks from Ground Zero itself and the memorial services being held. They screamed and chanted, and at least one man tore pages out of the Koran and scattered them throughout the street.

Then, as suddenly as it came, the furore died down to a few embers at the extremes. But the community centre is still years and millions of dollars away from being a reality, and we can all expect more outrage to come.

When cultish Florida church leader Terry Jones announced that he would burn a pile of Korans in his front yard on Sept. 11, the media dug in and didn’t let go. It became the biggest story of the week, with dozens of reporters and news crews camped out in front of Jones’ church, while reporting that footage and even stories about such a bonfire could set off violent riots in the Muslim world and give recruiting fodder to terrorists.

So worried was the Obama administration that Defence Secretary Robert Gates called Jones personally to ask him not to burn any Korans. He eventually agreed to call off the event after a local imam told him that Rauf, the New York imam, had promised to move his community centre, even though he hadn’t. Jones never did go through with it.

The spectacle angered the “God hates fags” funeral protesters at the Westboro Baptist Church, who’d been burning Korans for years.

It also prompted copycats, like the man in Texas who tried to burn one of the holy books but was thwarted by a skateboarder, who described the incident thusly:

I snuck up behind him and took his Koran, he said something about burning the Koran, I said, “Dude you have no Koran,” and ran off.

The opposition to a mosque near Murfreesboro, Tenn., started out scary — first with vandalism and then with an arson that claimed some of the mosque’s construction equipment. But it quickly turned to farce, as opponents to the Islamic Centre of Murfreesboro — which has been in town for 30 years and is now trying to expand — filed a lawsuit to try and stop it.

The lawyers for the opponents, partially funded by a Christian Zionist group, argued in county court that the mosque’s permit for religious use should never have been approved because Islam, they claimed, isn’t a religion. When the Justice Department filed a brief noting that the U.S. has recognized Islam since Thomas Jefferson’s time, the lawyers claimed that the federal government couldn’t be trusted because it had once condoned slavery.

The judge ruled that the mosque’s construction could continue.

Violence has, fortunately, not spread past isolated incidents like the young man who slashed a Muslim cab driver in New York City.

But the story of Islamophobia in America is not over. Tensions between the Muslim community and federal law enforcement are growing, as the FBI continues to conduct undercover terror stings that some critics say amounts to entrapment. The new chairman of the House Homeland Security Committee, Rep. Peter King (R-NY) has claimed that Muslim leaders are insufficiently cooperative with terror investigations and therefore is holding hearings on the “radicalisation” of Muslim Americans. Other congressmen have promised to try to keep the hearings from targeting Muslims.