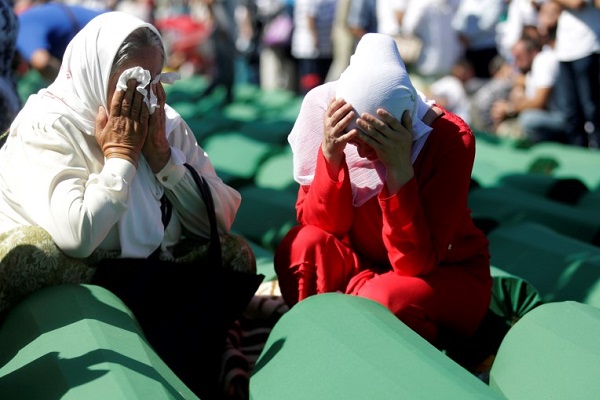 Muslim women cry near coffins of their relatives, who are newly identified victims of the 1995 Srebrenica massacre, which are lined up for a joint burial in Potocari near Srebrenica, Bosnia and Herzegovina July 11, 2016. REUTERS/Dado Ruvic

An appeals court has ruled that the Netherlands should accept responsibility for handing the victims over to Bosnian Serb forces, which led to them being murdered, in 1995.

The ruling largely upheld a civil court’s 2014 judgment that said the state was liable in the deaths of Bosnian Muslim men, who were turned over by Dutch UN peacekeepers to Bosnian Serb forces in July 1995, and were subsequently killed.

Hague Appeals Court presiding judge Gepke Dulek said that because Dutch soldiers sent the men off the Dutch compound, along with other refugees seeking shelter there, ‘they were deprived of the chance of survival’.

However, after estimating the men’s chances of survival within the compound as 30%, the court said the Netherlands is only ‘liable for 30% of the losses suffered by the relatives’.

This outraged a group of female relatives of Srebrenica victims, who were in court for the ruling.

Munira Subasic, who leads an organisation called the Mothers of Srebrenica that brought the case, stood up and waved her finger at the judge, saying that ‘this is a huge injustice’.

Lawyers for the victims can now begin discussions with government lawyers about compensation.

Marco Gerritsen, the lawyer who represented the women, said he understood the relatives’ anger.

However, he added: ‘But from a legal point of view it is not that bad. Of course we would have hoped for more, and I think we had a good case.’

He is now going to study the judgment to see if it’s possible to appeal to the Dutch Supreme Court.

Tuesday’s ruling is the latest in a string of legal cases in the Netherlands concerning the country’s role in the massacre, and whether Dutch soldiers coul dor should have done more to prevent the mass killings.

On July 13, 1995, Dutch peacekeepers bowed to pressure from Bosnian Serb forces commanded by General Ratko Mladic, and forced thousands of Muslims out of their fenced-off compound where they had sought refuge.

The Bosnian Serb forces sorted the Muslims by gender, then trucked the men away and began killing them in what would become the bloody climax to the 1992 to 1995 Bosnian war.

International courts have previously ruled that this slaughter was genocide.

In total, the war claimed around 100,000 lives. Some 8,000 Muslim men and boys were killed in Srebrenica alone.

The bodies from the Srebrenica massacre were buried in hastily made mass graves, which were later bulldozed and scattered among other burial sites in an attempt to hide the evidence.

Mladic is on trial for genocide and other offences at a UN tribunal in The Hague for his alleged role in Srebrenica, and other crimes during the war.