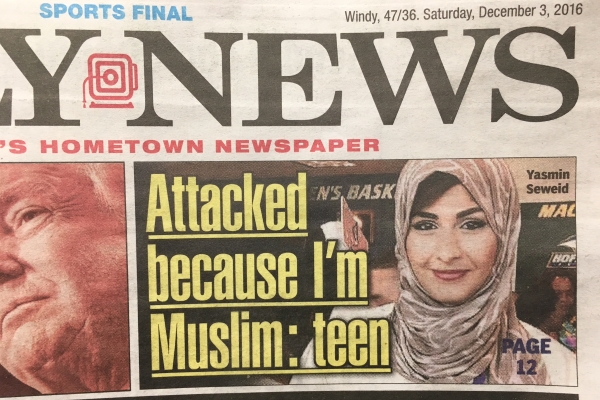 By: Jaweed Kaleem and Barbara Demick

A young Muslim woman in New York who said she was threatened on a subway train by Donald Trump supporters made the story up, according to police.

New York police arrested Yasmin Seweid, 18, on Wednesday and charged her with obstructing governmental administration and filing a false report, according to a statement.

Seweid told police that on Dec. 1 that three drunk white men began shouting, “Trump! Trump!” to her while attempting to snatch the hijab off her head. The story was widely reported and was featured on the front page of the New York Daily News with the headline “Hate and the City.”

New York news media reported Thursday that Seweid made up the story to avoid being punished for staying out past curfew. She appeared in court with a shaved head, which the Daily News said was punishment by her parents for the incident. The Baruch College student faces up to a year in jail for each of the charges.

The Daily News denounced Seweid for wasting the resources of the Police Department and for hurting fellow Muslims. “The next time a real victim of real hate comes forward, more cynics will scoff,’’ the newspaper wrote.

Seweid’s allegation was among a series of reported incidents after the election in which attackers invoked the president-elect’s name. Since Nov. 8, civil rights groups such as the Southern Poverty Law Center and Council on American Islamic Relations have documented hundreds of incidents around the country that targeted Muslims, blacks, Jews, Latinos, immigrants and lesbian, gay, bisexual and transgender people.

Last month the FBI reported a 67% increase in hate crimes against Muslims in 2015 compared with the previous year.

A few of the more recent reports have been proved to be false.

In one case, police said a female Muslim student at University of Louisiana at Lafayettefalsely reported that men attacked her on campus the day after the election, took her wallet and removed her hijab, or head scarf.

In another incident, police said a 27-year-old African American man in Volusia County, Fla., taped a note with “KKK” and “Trump” written on it to his girlfriend’s mailbox this week, then threw a brick through her car window and spilled gasoline on her back seat because he was mad at her over a child custody battle. The man made it look like a hate crime to deter police from investigating him, authorities said.

In New York, Muslim students held a rally Dec. 6 to protest harassment of women in head scarves. Organizers were concerned that Yasmin Seweid did not appear, and thought she felt too anxious to show up.

“We will take a strong stand against false reporting,’’ said Rana Abdelhamid, one of the organizers, adding that she had not spoken to Seweid and wanted to hear an explanation of what happened.

The group, Women’s Initiative for Self Empowerment, said in a statement that it feared the incident “would make it more challenging for all the women we connect with, many of whom do not share their experiences of hate-based violence publicly, to report these crimes.”