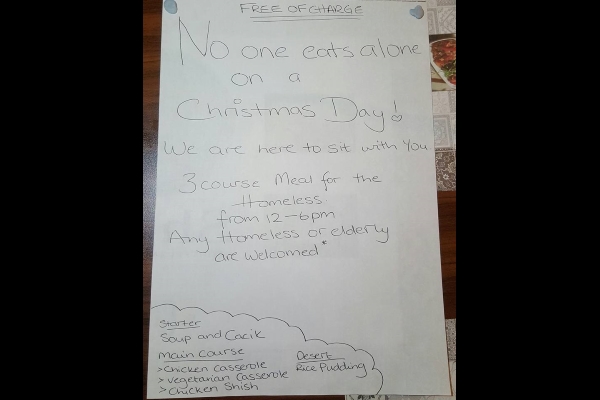 The Muslim-owned Shish Restaurant near London is offering an irrefusable Christmas gift to its community: a free meal for homeless and elderly people. Posting a note to its Facebook as well as the front door a few weeks ago, the Turkish restaurant said, “No one eats alone on Christmas Day! We are here to sit with you.”

It’s not your average Christmas meal either. The restaurant also posted the menu for a three-course meal of soup and cacik, chicken casserole, vegetarian casserole, chicken shish, and rice pudding.

In an interview with CNN, the restaurant owner, Serdar Kigili, who is from Turkey, said he was inspired to offer a free Christmas meal after an elderly woman who lives nearby came into the restaurant asking for help to close her window; she also mentioned that she would be spending Christmas alone.

Thinking of his mother, Kigili decided to ensure the woman — and anyone else in the community — would not be alone on Christmas. The plan is to serve as many people who come into the roughly 66-seat space between noon and 6 in the evening; the gesture also inspired 25 residents to assist in the effort.

After Brexit, the number of Islamophobic crimes committed have hit a record high in Britain, so the Shish Restaurant’s gesture is especially poignant. Though Shish’s manager, Irfan Can Genc, summarised the sentiment best speaking to CNN: “It’s not about religion, language, or culture. It’s about community.”