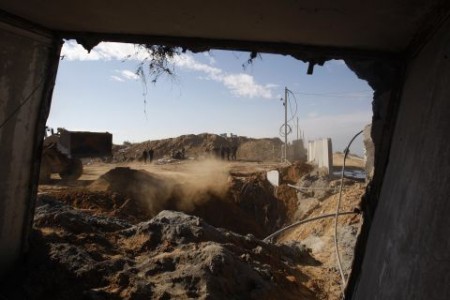 The Muslim Brotherhood seeks unity between Muslims calling for justice, civil society and a free and fair political arena. As part of its strategy it engages with nations – like Iran – and groups – like Hamas – that would otherwise perhaps be ostracised, a move that would only isolate and inflate division and conflict.

In this context, the Muslim Brotherhood has maintained informal ties with Iran for many years. Under the influence of the tolerant Brotherhood, Egyptians are more comfortable with Shiite Islam than other Sunnis in other Arab countries. The West fears Iran – along with its anti-Israel and anti-West policies – developing close relations with the Brotherhood, thereby indicating the West’s distrust in the Brotherhood’s identity and commitment to its political positions.

During the fighting in Gaza, Iran was vocal in their support of Hamas, while it blasted the Mubarak regime for its inaction. At the same time, Hamas leader Khaled Mashal thanked Iran for its support of his organization, adding that he sees Iran as a partner in their victory. This response could be taken as a political struggle to achieve self-determination, rather than a religious alliance; however, the West is firm in its belief that Hamas and Iran are a united force on every level.

With a history of being controlled and influenced by colonialist rule and the West’s dedication to divide and rule the Muslim world, the Muslim Brotherhood has sought to combat sectarianism, put the Shiite-Sunni conflict aside, and create a united Muslim front; even if that includes Iran.

Choosing to empathize and support the Palestinian cause does not necessarily make an individual or group a threat to the West or Western interests. The Muslim Brotherhood is clear in its position of support for Palestine but has also reiterated its committed to the treaties made by the ousted Egyptian regime regarding the peace treaty with Israel.

In its commitment to decry the role of corrupt Arab rulers and the onslaught of Western manipulations to gain control of Arab wealth, the Muslim Brotherhood denounces sectarian differences among Muslims, arguing that unity is necessary for the Muslims to become autonomous, democratic and free societies. As part of that needed unity it is necessary that there be contact between Muslim Brotherhood and Iranian clerics in order to fulfil the main purpose of Islam’s mission to converge the Islamic sects as much as possible.

A desirable level of cooperation resulted from this convergence and in 1988, for example, at the conclusion of the Iran-Iraq war, at the request of Muslim Brotherhood leader Sheikh Muhammad Ghazzali, the Iranians agreed to unilaterally release the Egyptian prisoners of war who had fought alongside the Iraqi army against Iran.

The concept of fighting occupation goes beyond the colonial history of the Middle East and the contemporary reality of Palestine, and in this context the Muslim Brotherhood supports the ideas and thoughts of the founder of the Islamic Republic of Iran, especially with regard to the Palestinian issue.

Mubarak and his predecessors feared Shiism in the past because of what it perceived as a rising Shiite tide in the region and therefore a threat to their own power. In response, the Egyptian government and the state media began waging a campaign against Shiism and Shiite symbols.

Meanwhile, the Brotherhood continued in its attempts to unite Muslims on a global scale, while one of its former members, prominent Egyptian cleric Sheikh Yusuf Qaradawi warned about missionary activities of Shiites and the Iranian government, especially in Egypt, adding that “the increasing infiltration of Shiism in Egypt may lead to a civil war like the one in Iraq.”

The US is concerned that Iran is expanding its influence in the Middle East, while Hamas remains vigilant against Israeli occupation and the Brotherhood continues to commit itself to peaceful democratic change in Egypt. Perhaps the US fails to understand why a variety of nations, with obviously different trends, would loosely affiliate with each other for a common goal; the end to occupation. Indeed, a democratic goal.