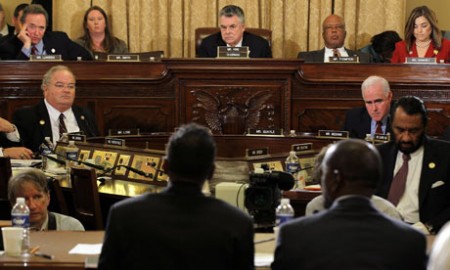 The King hearing to examine ‘The Extent of Radicalisation in the Muslim Community’. Photograph: Alex Wong/Getty Images

When South Carolina Republican Jeff Duncan went on a tirade about sharia law threatening the constitution at Peter King’s hearing on “The Extent of Radicalisation in the Muslim Community” last week, he provided a telling window into the conspiracy theories that motivate many supporters of King’s McCarthy-esque probe.

As I discussed in greater detail last week on the Religion Dispatches website, the notion that sharia law has infiltrated America through a fifth column of subversive Muslims who secretly want to install an Islamic theocracy in place of a constitutional republic is one that is commonly accepted in many conservative circles.

A cottage industry of self-styled national security experts, pundits, ardent Christian Zionists, Republican operatives, think-tanks, and advocacy groups have spent years laying the groundwork for portraying American Muslims as part of worldwide plot to “Islamicise” America. This cottage industry has fuelled rising anti-Muslim bigotry in the US, including growing efforts to thwart the building of mosques and community centres, an increasing number of states taking up bills that would ban sharia law, and now, King’s highly publicised hearings. All of this is the result of a relentless campaign years in the making.

The conspiracy theory about sharia law is fivefold: that the goal of Islam is totalitarianism; that the mastermind of bringing this totalitarianism to the world is the Muslim Brotherhood, the grandfather of all Islamic groups from Hamas to the Islamic Society of North America; that these organisations within the US are traitors in league with the American left and are bent on acts of sedition against America; that the majority of mosques in the US are run by imams who promote such sedition; and that through this fifth column sharia law has already infiltrated the US and could result in a complete takeover if not stopped.

King, who has said on several occasions that 80% of the mosques in the US are run by radical imams, provided no proof whatsoever of this assertion at his hearings. His three witnesses, two of whom were relatives of young men they claimed were “brainwashed” by radical Islam, all offered nothing but opinion based on personal experience. King’s key witness, Arizona physician Zuhdi Jasser, founder of the non-profit American Islamic Forum for Democracy, is the star of the controversial film The Third Jihad, one of the principal pieces of propaganda about the supposed sharia threat.

The Third Jihad, which also featured appearances by former New York mayor Rudy Giuliani, Senator Joseph Lieberman, and former homeland security secretary Tom Ridge, was produced by the Clarion Fund, a non-profit founded by officials with the Orthodox Jewish group Aish Hatorah. Clarion’s previous anti-Islam film, Obsession, was subject to scathing criticism by prominent Jewish leaders when it was widely distributed in 2008, with one calling it “the protocols of the learned elders of Saudi Arabia”. Clarion recently appointed Frank Gaffney, the controversial president of the Centre for Security Policy, which has played a central role in fomenting fears of this supposed “sharia threat”, to its advisory board. Duncan, in his statement at King’s hearing, citing approvingly Gaffney’s 2010 “Team B” report, probably the most extensive rendering of the sharia conspiracy theory.

Jasser, through his appearance in The Third Jihad, played a significant role in promoting the false claim that a single document introduced in the terrorism financing prosecution of the Holy Land Foundation is proof of the supposed sharia plot. The document, “An Explanatory Memorandum on the General Strategic Goal for the Group in North America”, was written by a lone member of the Muslim Brotherhood in the early 1990s, and identifies more than 200 groups by name as possible allies. But “nobody has ever produced any evidence that the document was more than something produced by the daydream of one enthusiast”, says Nathan Brown, a professor at The George Washington University and an expert on the Muslim Brotherhood.

That hasn’t stopped the sharia conspiracists: the document is widely cited as proof that the Muslim Brotherhood has plotted this sharia takeover with the approval and assistance of virtually every Muslim organisation in America. Gaffney said recently: “It is now public knowledge that nearly every major Muslim organisation in the United States is actually controlled by the MB or a derivative organisation. Consequently, most of the Muslim-American groups of any prominence in America are now known to be, as a matter of fact, hostile to the United States and its constitution.” Allen West, a Florida Republican, has called the supposed sharia threat “sedition”.

As aspiring Republican presidential candidates, most notably but not exclusively Newt Gingrich, jump on the “sharia threat” bandwagon, and as Republicans hail the King hearings as essential to America’s security, it also becomes clear how anti-Muslim fervour will play a role in the 2012 election. After spending years laying the groundwork with its base, the sharia conspiracy industry will continue to portray – by innuendo, if not outright accusation – President Obama as a crypto-Muslim whose administration is complicit in nothing short of treason.