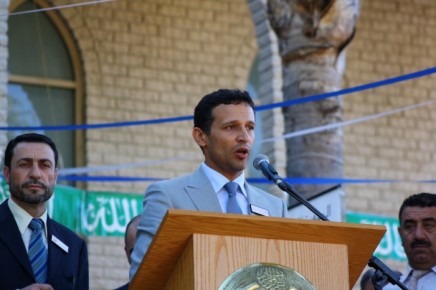 A hard-fought contest for Muslim votes is under way before the March 26 state election as the powerful Lebanese Muslim Association throws its support behind a swag of Liberal candidates in the Labor strongholds of southwestern Sydney, urging Muslim voters to punish the state Labor government for neglecting them.

The LMA has declared its backing for Liberal candidates in the safe Labor seats of Bankstown, Lakemba, Canterbury, Auburn, Liverpool and Granville, electorates where the proportion of Muslim voters is as high as 17 per cent.

“They have this perception that it’s a bunch of illiterate migrant factory workers and it’s easy to control their votes,” says Mr Dandan. “(We) have traditionally been Labor voters for many years, but when we look at what we’re getting back for it, there’s very little we can see.”

Greenacre developer Bill Chahine is one of three Lebanese Muslim candidates standing for the Liberal Party. Mr Chahine is contesting Bankstown, the fourth-safest seat in NSW, which has been held by Labor since it was created 84 years ago.

Outgoing MP Tony Stewart, who held the seat by a 25.4 per cent margin, has been replaced as Labor’s candidate by Bankstown Mayor Tania Mihailuk.

“Bankstown has been at a standstill for over a decade, with little or no improvements to a range of services,” says Mr Chahine. “Muslim voters are like any other voters.

It is the first time in an Australian election that Muslim voters have sought to flex political muscle, which is substantial in electorates where as many as one in six constituents are Islamic.

At last year’s federal election Labor’s vote slumped by up to 15 per cent among its Sydney ethnic support base, due largely to the government’s campaign against a “big Australia”.

Labor is hoping to win some back with its renewed embrace of multiculturalism, unveiled this month.

Last December, after Mr Dandan first flagged his association’s stand against Labor, Mr Stewart accused the LMA of suffering from “a siege mentality syndrome” and of following a “medieval approach” by bringing religion into politics.

This week, Mr Chahine has faced a Labor call for his disendorsement over accusations that he was using his candidacy to promote a block of 30 apartments being built by his family’s company, and a claim by a would-be independent candidate, Rebecca Kay — a Muslim convert — that she had been asked not to stand because it could “split the Muslim vote”. Mr Chahine has denied both claims.

The LMA is backing Lebanese Muslim candidates Muzhar Hadid in Liverpool and Michael Hawatt in Lakemba.

It is also supporting three non-Muslim candidates, Ned Attie and Tony Issa in Auburn and Granville, and sitting Liberal MP Victor Dominello in Ryde. “We’re not just supporting Muslims, we’re supporting anyone who will add value in those seats,” says Mr Dandan. “We need to unite this community so we can be taken seriously politically.”