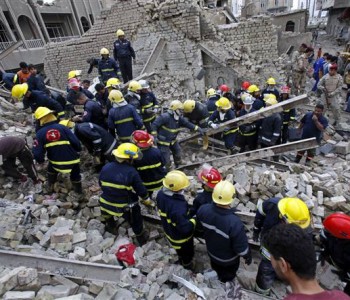 A series of explosions across Baghdad, the Iraqi capital, has killed at least 63 people and wounded 285 others, hospital and police officials say.

The bombings began at about 6:15pm local time on Tuesday and took place in at least 10 neighbourhoods, involving booby-trapped cars, roadside bombs and mortar strikes.

The attacks appeared directed mostly at the city’s majority Shia population, though some blasts occurred in Sunni neighbourhoods.

Rawya Rageh, Al Jazeera’s correspondent in Baghdad, said most of the blasts happened near markets and banks and areas that are usually crowded at that time in the evening.

“There have been a series of attacks of a highly sectarian nature recently. The city is witnessing some very violent days,” Rageh said.

“It’s all being blamed on the failure of Iraqi politicians to agree on the formation of a government.

“It’s been eight months since the inconclusive March 7 elections failed to produce an outright winner.

“The people, observers and even some politicians believe the political impasse is giving an opportunity to those intent on destabilising the country to sow chaos.”

The combination of car bombs and roadside bombs came just two days after gunmen in Baghdad held a Christian congregation hostage, in a siege that ended with 58 people dead.

The assailants took more than 100 people hostage in a standoff that ended after police stormed the church two hours later.

At least 25 of those killed were hostages.

Iraq officials launched an investigation into the church raid on Tuesday, saying they are trying to find out how the gunmen managed to storm the building despite checkpoints, an official said.