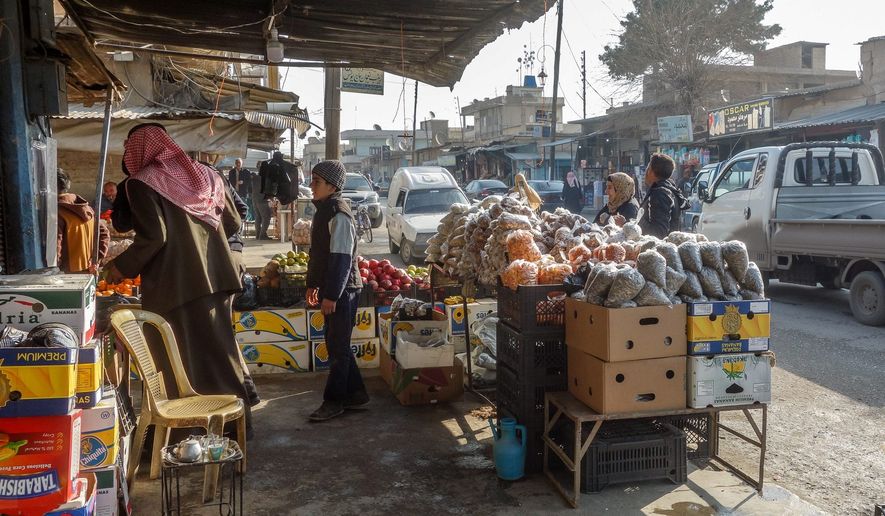 QAMSESHLI, SYRIA – A smattering of celebratory bullets lit up the sky like fireworks in towns in northeastern Syria on Thursday night, but by Friday afternoon the mood was more somber.

The terms of the five-day cease-fire were becoming more clear. The Turkish pause in hostilities was contingent upon Kurdish-led Syrian Democratic Forces moving farther back from the border, which SDF forces have said they will not do.

On Friday evening, the SDF released a statement declaring the cease-fire had failed.

Early reports of shelling and battles in border towns were later verified when the wounded arrived at hospitals outside the battle zone.

In the markets of Qamishli, a town on the Syrian border with Turkey that has been bombed several times, locals said they didn’t want the SDF to give up. They lost many people fighting Islamic State militants, said Mohammed, 32, a father of two. But this fight expanded the Kurdish-led autonomous region in area and in strength.

“We have already paid with too many lives,” he said, leaning over his family’s vegetable stand piled with eggplants, potatoes and lemons.

His nephew, 11-year-old Mahmoud, smiled shyly as he spoke. He said among the dead was 13-year-old Mohammed, his friend and football companion.

“I was scared,” he said quietly. “The bomb came to our side.”

The battle began just over a week ago, when Turkey declared it would establish a buffer zone between its borders and the SDF using military force.

For years, the SDF had been the United States’ strongest ally on the ground against Islamic State militants in Syria. The U.S. also served as a kind of political buffer between bitter enemies — Turkey and the YPG, the main military wing of the SDF.

Turkey views the SDF as a part of the PKK, a designated terrorist group that has attacked Turkey for decades, leading to tens of thousands of deaths.

In the week that followed, 200,000 people fled their homes and hundreds of people were killed. Foreign aid workers fled the region, and forces securing Islamic State militants have dramatically weakened, in some places with more than half of their ranks moving to the front.

At a hospital in Hasseka, a city run by the Kurdish semiautonomous government, soldiers and civilians nursed gruesome wounds on Friday, as reports of dead and wounded in border towns trickled in.

They blamed Turkey for the assaults, but also the U.S.

Trump said the U.S. would pull out almost a year ago, said Viane, an 18-year-old artillery specialist with the YPJ, the all-female wing of the YPG. But after years alliance, she did not think they would be abandoned so abruptly.

“I was shocked,” she said, sitting on the floor of the hospital. Her brother, 19-year-old Hussain, had raspy breath and deep burn wounds after an airstrike on Wednesday. “I didn’t see this coming.”

Downstairs in an office, Dr. Abbas Mansoura, said the hospitals are low on supplies and staff, and wounded civilians are believed to be still trapped in the battle zones.

“If this continues,” he said. “It will be a catastrophe.”