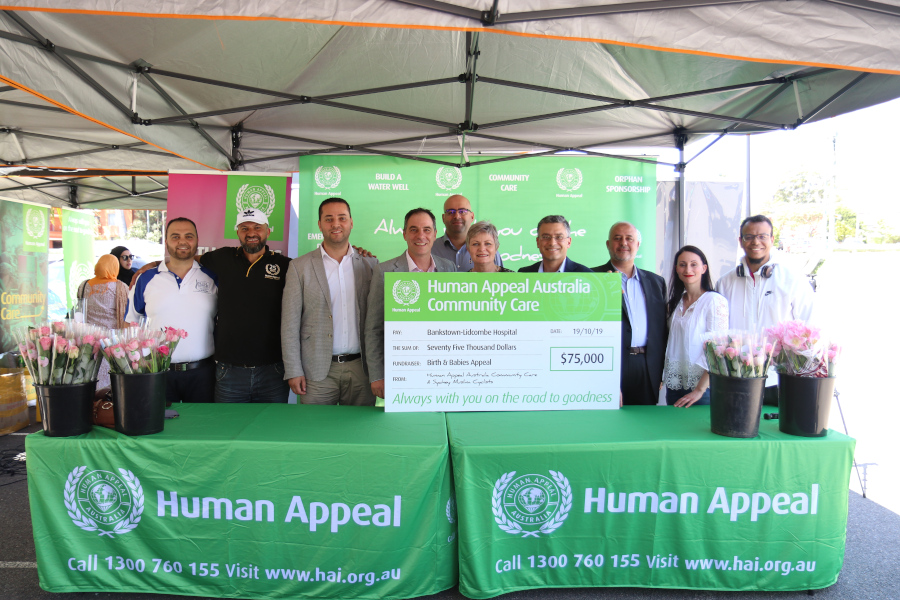 On Saturday the 19th of October 2019, Human Appeal Australia with support of the Sydney Muslim Cyclists and community organisations held a Family Fun Day at the Australian National Sports Club in Parry Park for the support of Bankstown-Lidcombe Hospital.

Mr Bashar Al-Jamal the director of the Human Appeal Australia presented a monumental cheque of $75,000 to the General manager of the Bankstown-Lidcombe Hospital, Mr Peter Rophail for their anticipated purchase of a new Ultrasound and Telemetry machine for the birthing unit. Obstetrics Department and Nursing Manager Dr Karen Harris and Birthing Unit Manager Ronia Awick were also on hand to receive the cheque.

The Birth and Babies Appeal were launched earlier this month to provide Bankstown-Lidcombe Hospital with a much- needed Ultrasound and Telemetry Machine which will be used in the Birthing Unit to enhance the services provided. Many families enjoyed the day with a free sausage sizzle, fairy floss, popcorn and frozen drinks alongside various free attractions including Sunnah sports with Bizry fitness challenge giveaways, petting zoo, jumping castles, face painting and henna.

“Since its inception, Human Appeal Australia has always strived to provide medical aid to the poor and needy around the world. However, in the past couple of weeks, we have been provided with a unique opportunity, that is to help serve our very own local community. With the high pressure and demand on Sydney’s public hospitals, a need for a new ultra-sound machine in Bankstown-Lidcombe’s birthing unit was presented. My youngest son was born in Bankstown-Lidcombe Hospital so it has a special place in my heart. Hence, it was my honour on behalf of Human Appeal’s Community Care program, to have pledged a total of $75,000 towards purchasing the machine”, said Bashar Al-Jamal.

‘Congratulations to Human Appeal Australia & Sydney Muslim Cyclists for raising funds to purchase an Ultrasound and Telemetry for the birthing unit at Bankstown Hospital. A special thank you to the beautiful people that donated and supported this important cause that is very close to my heart’, commented Clr Bilal El-Hayek.

‘Thank you to Human Appeal Australia and the Sydney Muslim Cyclists for their generous donation of $75,000 to Bankstown-Lidcombe Hospital’s Birthing Unit. The Ultrasound machine will be used both by the Birthing Unit and the Day Assessment Unit.  It will be used to do foetal surveillance which includes checking the babies growth, the amniotic fluid and the how the placenta is functioning. The machine could also be used during obstetric emergency or during labour to check the babies position’, said General Manager of the Bankstown-Lidcombe Hospital, Mr Peter Rophail.

This ultra-sound and telemetry machine will be able to help serve many expecting parents in monitoring the growth and development of their babies.

Human Appel Australia would like to thank all involved and reaching out to our community to donate generously to help us to support the hospital.  Human Appeal Australia, always with you on the road to goodness…