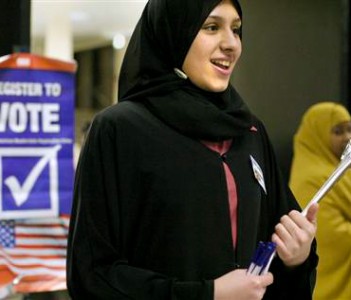 Discussions over Islam’s place in America ahead of national midterm elections are prompting American Muslims to make their voices heard through voting.

Muhammed Malik, a South Florida Muslim community advocate, said debate over the Park51 Community Centre in Manhattan, the rescinded threat to burn Qur’ans in Florida, and Muslim fears of racial profiling have created a positive moment in American history.

“When you look at it historically, we are really stepping up to the plate, I think, in very positive, peaceful ways that are really joining that great American tradition of becoming the fabric of this country,” Malik said. “Once you get politically engaged, we become what people think of what it means to be an American.”

The Council on Islamic-American Relations (CAIR) and the Muslim Public Affairs Council (MPAC) are acquainting American Muslims with the voting process. CAIR has released voting guides for 23 states that explain when polls open, how to register to vote, what identification is needed and voters’ rights.

Haris Tarin, the director of MPAC’s Washington office, said his organization is reaching out to American Muslims through a series of workshops conducted across the country.

“We’ve been educating them on how to get out the vote, on how to best engage their candidates that are on the ground to make sure they come out to mosques, to hold candidate nights,” Tarin said.

At a candidate night co-sponsored by MPAC on Oct. 26 in Northern Virginia, Muslims listened to Democratic and Republican candidates discuss issues of importance to American Muslims and to Americans generally.

And it’s not just in the lead-up to the midterm elections that American Muslims are engaging in the political process. Organizations such as the Council of Islamic Organizations of Greater Chicago helped organize Muslim Action Day in April, when community representatives met legislators at the state capitol to discuss voter issues.

“Typically, the Arab and Muslim community are often looked at as individuals who are going to be voting on foreign affairs — how is the candidate going to help or deal with the Middle East. That trend is changing, and it is changing quickly,” Ayoub said.

A new generation is playing a role in how American Muslims vote. Immigrants to America tend to vote according to policies that affect their homelands, but their children adopt a different worldview, Ayoub said. He said a recent survey of Arab Americans in Michigan, which has the country’s largest concentration of Arab Americans; found that their biggest concerns were the economy and education, not foreign issues.

The 2008 presidential election highlighted the new generation of Muslim and Arab-American interest in civic engagement.

“We have a lot of younger-generation Arab and Muslim Americans that became involved… college kids or recent graduates, and now are a bit more involved in the footwork,” Ayoub said.

The September 11, 2001, attacks also influenced the political engagement of American Muslim voters. Before 2001, many American Muslims were content with social and economic integration. But, as focus increased on the American Muslim community, they needed to make their voices heard.

“Post-9/11, the American Muslim community realized that we have to speak for ourselves, that on 9/11, 19 foreigners who were not Muslim Americans hijacked not only planes but hijacked their narrative and their story,” Tarin said.

Now, American Muslims say they will write their own story through civic engagement at the ballot box.

“The strongest tool that we have here is the power of our vote,” Ayoub said. “If the community gets out and votes, they will make their voice heard.”