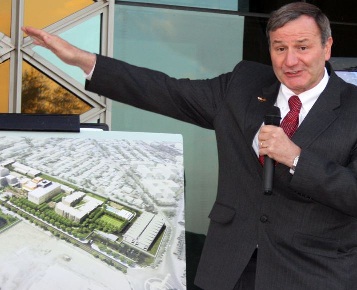 The United States is bolstering its presence in Afghanistan with a 500 million dollar expansion of its Kabul embassy and the construction of two consulates, it announced Wednesday.

Washington’s Kabul embassy is already its biggest in the world, with about 1,100 employees, projected to rise to 1,200 by the end of the year, officials said.

Hundreds have arrived over the course of this year as part of a “civilian surge” bringing development experts into the country to compliment the military effort already in its 10th year.

The United States and NATO have 150,000 troops in Afghanistan fighting the Taliban-led insurgency, following a military surge aimed at speeding an end to the war.

The embassy expansion contract was worth 511 million dollars and had been awarded under US law to an American company, Caddell Construction Inc., ambassador Karl Eikenberry said.

Another two contracts, worth 20 million dollars each, have been awarded for the construction of consulates in Herat, the main city in western Afghanistan, and Mazar-I-Sharif in the north, he said.

Speaking to a gathering of Afghan officials, Eikenberry said the expansion would enable the United States “to carry out its pledge to maintain into the future its very significant security, government, economic and civil society programmes”.

He said the projects currently employed 500 Afghans and that “once construction gets underway more than 1,500 Afghan workers will be employed through the completion of the project in summer 2014”.

The embassy project includes an office building with 302 desks, two apartment buildings with 433 beds and a parking garage with capacity for 300 vehicles, it said.

It said the project would employ 600 Afghans and generate 150 million dollars in business for local construction companies.

It was due to be completed in June 2014, with the two consulates — each expected to generate six million dollars for local businesses and employ 150 Afghans — due to be finished in January 2011.

“All combined over the last two years, the dollar value for our diplomatic facilities expansion contracts in Kabul, Mazar and Herat now will be at about 800 million dollars,” Eikenberry said.