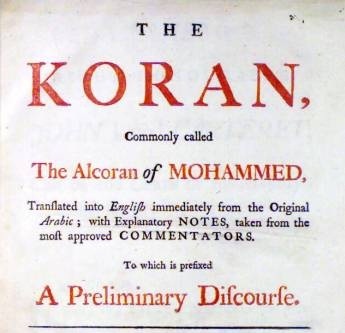 The true history of the Koran in America

Nine years later, we are still haunted by Sept. 11, and in some ways it’s getting worse. All summer, a shrill debate over whether to build a mosque near the Ground Zero site was fueled by pundits on the right, who drummed up a chorus of invective that made it impossible to focus on the modest facts of the case. Then in the days leading up to the 11th, a church in Gainesville, Fla., sparked a firestorm — almost literally — by inviting Christians to come by on the anniversary for a ceremonial burning of the Koran. The Dove World Outreach Center — a misnomer if ever there was one — has made a cottage industry of its Islam-bashing, promoting its old-fashioned hate crusade with the most modern weapons — YouTube, podcasts, Facebook, and blogs (“Top Ten Reasons to Burn a Koran”).

Obviously, this was an act of naked self-promotion as much as a coherent statement about religion. Its instigator, the church’s pastor, Terry Jones, based his crusade on a series of mind-bending assumptions, including his belief that Muslims are always in bad moods (he asks, on camera, “Have you ever really seen a really happy Muslim?”). But for all of its cartoonish quality, and despite his cancellation under pressure Thursday, the timing of this media circus has been a disaster for US foreign policy and the troops we ask to support it. At the exact moment that we want to act as the careful steward of peace in the Middle East, minds around the world have been filled with the image of Korans in America being tossed onto pyres.

For better or worse, there is not much anybody can do about religious extremists who offend decency, yet stay within the letter of the law. The same Constitution that confirms the right to worship freely protects the right to worship badly. But September is also the anniversary of the 1787 document that framed our government, and in this season of displaced Tea Party anger, it is worth getting right with our history. There is nothing wrong with the desire to go back to the founding principles that made this nation great — but we should take the time to discover what those principles actually were.

For most Americans, the Koran remains a deeply foreign book, full of strange invocations. Few non-Muslims read it, and most of us carry assumptions about a work of scripture that we assume to be hostile, though it affirms many of the earlier traditions of Christianity and Judaism. Like all works of scripture, it is complex and sometimes contradictory, full of soothing as well as frightening passages. But for those willing to make a genuine effort, there are important areas of overlap, waiting to be found.

As usual, the Founders were way ahead of us. They thought hard about how to build a country of many different faiths. And to advance that vision to the fullest, they read the Koran, and studied Islam with a calm intelligence that today’s over-hyped Americans can only begin to imagine. They knew something that we do not. To a remarkable degree, the Koran is not alien to American history — but inside it.

No book states the case more plainly than a single volume, tucked away deep within the citadel of Copley Square — the Boston Public Library. The book known as Adams 281.1 is a copy of the Koran, from the personal collection of John Adams. There is nothing particularly ornate about this humble book, one of a collection of 2,400 that belonged to the second president. But it tells an important story, and reminds us how worldly the Founders were, and how impervious to the fanaticisms that spring up like dandelions whenever religion and politics are mixed. They, like we, lived in a complicated and often hostile global environment, dominated by religious strife, terror, and the bloodsport of competing empires. Yet better than we, they saw the world as it is, and refused the temptation to enlarge our enemies into Satanic monsters, or simply pretend they didn’t exist.

Reports of Korans in American libraries go back at least to 1683, when an early settler of Germantown, Pa., brought a German version to these shores. Despite its foreign air, Adams’s Koran had a strong New England pedigree. The first Koran published in the United States, it was printed in Springfield in 1806.

Why would John Adams and a cluster of farmers in the Connecticut valley have bought copies of the Koran in 1806? Surprisingly, there was a long tradition of New Englanders reading in the Islamic scripture. The legendary bluenose Cotton Mather had his faults, but a lack of curiosity about the world was not one of them. Mather paid scrupulous attention to the Ottoman Empire in his voracious reading, and cited the Koran often in passing. True, much of it was in his pinched voice — as far back as the 17th century, New England sailors were being kidnapped by North African pirates, a source of never ending vexation, and Mather denounced the pirates as “Mahometan Turks, and Moors and Devils.” But he admired Arab and Ottoman learning, and when Turks in Constantinople and Smyrna succeeded in inoculating patients against smallpox, he led a public campaign to do the same in Boston (a campaign for which he was much vilified by those who called inoculation the “work of the Devil,” merely because of its Islamic origin). It was one of his finer moments.

Other early Americans denounced Islam — surprisingly, Roger Williams, whom we generally hold up as a model of tolerance, expressed the hope that “the Pope and Mahomet” would be “flung in to the Lake that burns with Fire and Brimstone.” But Rhode Island, and ultimately all of New England, proved hospitable to the strangers who came in the wake of the Puritans — notably, the small Jewish congregation that settled in Newport and built Touro Synagogue, America’s oldest. And in theory — if not often in practice (simply because there were so few) — that toleration extended to Muslims as well.

This theory was eloquently expressed around the time the Constitution was written. One of its models was the 1780 Massachusetts Constitution, which John Adams had helped to create, and which, in the words of one of its drafters, Theophilus Parsons, was designed to ensure “the most ample of liberty of conscience” for “Deists, Mahometans, Jews and Christians.”

As the Founders deliberated over what types of people would ultimately populate the strange new country they were creating, they cited Muslims as an extreme of foreign-ness whom it would be important to protect in the future. Perhaps, they daydreamed, a Muslim or a Catholic might even be president someday? Like everything, they debated it. Some disapproved, but Richard Henry Lee insisted that “true freedom embraces the Mahometan and Gentoo [Hindu] as well as the Christian religion.” George Washington went out of his way to praise Muslims on several occasions, and suggested that he would welcome them at Mount Vernon if they were willing to work. Benjamin Franklin argued that Muslims should be able to preach to Christians if we insisted on the right to preach to them. Near the end of his life, he impersonated a Muslim essayist, to mock American hypocrisy over slavery.

Thomas Jefferson, especially, had a familiarity with Islam that borders on the astonishing. Like Adams, he owned a Koran, a 1764 English edition that he bought while studying law as a young man in Williamsburg, Va. Only two years ago, that Koran became the center of a controversy, when the first Muslim ever elected to Congress, Keith Ellison, a Democrat from Minnesota, asked if he could place his hand on it while taking his oath of office — a request that elicited tremendous screeches from the talk radio extremists. Jefferson even tried to learn Arabic, and wrote his Bill for Establishing Religious Freedom to protect “the Jew and the Gentile, the Christian and the Mahometan, the Hindoo and infidel of every denomination.”

Jefferson and Adams led many of our early negotiations with the Islamic powers as the United States lurched into existence. A favorable treaty was signed with Morocco, simply because the Moroccans considered the Americans ahl-al-kitab, or “people of the book,” similar to Muslims, who likewise eschewed the idolatry of Europe’s ornate state religions. When Adams was president, a treaty with Tripoli (Libya) insisted that the United States was “not in any sense founded upon the Christian religion” and therefore has “no character of enmity against the laws, religion and tranquility of Mussulmen.”

There was another important group of Americans who read the Koran, not as a legal sourcebook, or a work of exoticism, but as something very different — a reminder of home. While evidence is fragmentary, as many as 20 percent of African-American slaves may have come from Islamic backgrounds. They kept their knowledge of the Koran alive through memory, or chanted suras, or, in rare cases, smuggled copies of the book itself. In the 1930s, when WPA workers were interviewing elderly African-Americans in Georgia’s Sea Islands, they were told of an ancestor named Bilali who spoke Arabic and owned a copy of the Koran — a remarkable fact when we remember that it was a crime for slaves to read. In the War of 1812, Bilali and his fellow Muslims helped to defend America from a British attack, inverting nearly all of our stereotypes in the process.

In 1790, as the last of the original 13 states embraced the Constitution, and the United States finally lived up to its name, George Washington visited that state — unruly Rhode Island — and its Jewish congregation at Newport. The letter he wrote to them afterwards struck the perfect note, and drained much of the antiforeign invective that was already poisoning the political atmosphere, only a year into his presidency. Addressing himself to “the children of the Stock of Abraham” (who, in theory, include Muslims as well as Jews), the president of the United States offered an expansive vision indeed:

“May the children of the Stock of Abraham, who dwell in this land, continue to merit and enjoy the good will of the other Inhabitants; while every one shall sit in safety under his own vine and figtree, and there shall be none to make him afraid.”

For democracy to survive, it required consent; a willingness to surrender some bits of cultural identity to preserve the higher goal of a working community. Washington’s letter still offers a tantalizing prospect, especially as his successor turns from the distracting noise of Gainesville to the essential work of building peace in the Middle East, for all of the children of the Stock of Abraham.