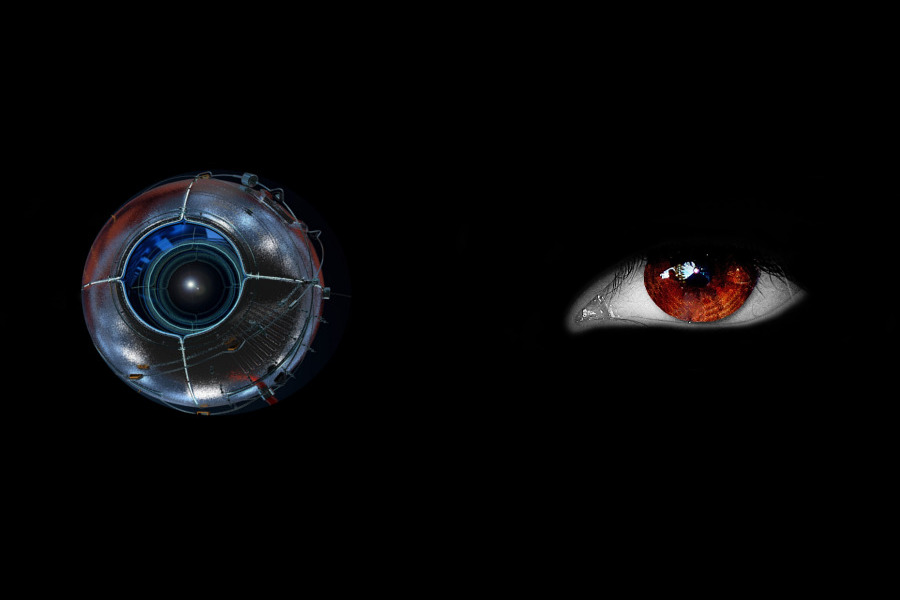 “…But I will tell you something which no Prophet has told his people. Verily he (the Dajjal or Anti-Christ) is one-eyed and Allah is not one-eyed.”  (Bukhari)

The change in the weather had been sudden and dramatic, tossing the small fishing vessel around like a piece of flotsam; until it was no more than that. Its crew, a group of Sahaabah (may Allah be pleased with them – the companions of the Holy Prophet Muhammad, peace & blessings be upon him), were washed up onto the shore of a foreign beach.

When they regained consciousness, they found that they all had survived the wreck. They decided to explore the island to see whether they could find someone to help them, maybe supply them with a boat.

It wasn’t long before they met a woman washing her hair in a rock pool. She directed them to a cave, managing to convey to them that there was someone there who wanted to speak with them. Intrigued, they entered the cave.

Within, they found a short man with only one eye, chained to the cavern wall. Right away, he began to ask them questions, whether certain events had taken place or not. They answered truthfully because of their nature. They could feel the evil of this man like a physical presence. When they had confirmed all that he had asked, the man said, ‘Alas, my time is near.’

The companions managed to get off the island and returned home safely. Upon arriving, they told their story to the Prophet (peace & blessings be upon him). It was then that they first heard of the Dajjal, the Anti-Christ.

There are three aspects of the Dajjal:

The latter two aspects of the Dajjal have been explained and outlined brilliantly by Ahmed Thomas in his book “the Dajjal – The King Without Clothes.” Through intense research, he has managed to write a brilliant account of scary facts that bring home the full weight of reality. He explains the social and cultural phenomenon as a system that is being prepared by the minions and followers of the Dajjal, through which he will operate and spread his evil. The Unseen Force is defined as the supernatural beings, such as Djinns and perhaps even “aliens” who abduct and possess humans to further his cause. Contemporary books such as ‘Omen’ and ‘Body Snatchers’, paint a frightening image of possibilities.

In this article, I intend to unveil the first aspect; the individual. The Book of Revelations by John (New Testament) contains prophecies regarding the Anti-Christ. However, over the times, many alterations have occurred in the original text and the commentaries have deviated from the actual meanings. That and the lack of consistency have left it in doubt of reliability and accuracy. Hence, there only remains the Hadith of the Noble Prophet Muhammad (peace & blessings be upon him) as the only accurate source of information.

In a Hadith narrated by Imran ibn Hussain (may Allah be pleased with them), the Prophet (peace & blessings be upon him) said, “From the appearance of Adam till the advent of Qiyaamah (Judgement Day) there is no fitnah (tribulation/trauma) much greater than that of the Dajjal.” (Muslim)

In anyone’s book, the Dajjal is the embodiment of evil. A wise man once said, ‘Know your enemies and keep them close to you. By knowing them, you know your weakness, thus neutralizing their potency.’ There are many Hadith which describe the Dajjal’s appearance, his height and his powers.

Ubadah ibn Saamit (may Allah be pleased with him) narrates that the Last Prophet (peace & blessings be upon him) said, “I have explained the Dajjal to you, but I fear that you might not have understood. Maseeh-ud-the Dajjal will be short and his legs will be crooked. The hair on his head will be extremely twisted. He will have one eye, while his other eye will be flat. It will be neither deep, nor protruding.”

Ibn Umar (may Allah be pleased with them)a narrates from the Last Prophet   (peace & blessings be upon him) regarding the Dajjal, “…red complexioned, fat, curly haired man, blind in the right eye which looks like a bulging grape.” (Bukhari)

According to the many Ahaadith describing the Dajjal, the most distinguishing feature of his face besides the bulging eye will be the Arabic letters Kaaf (k), Faa (f), Raa (r), on his forehead. These letters spell Kufr (disbelief). All believers, regardless of their literacy will decipher these letters.

It has also been ascertained from the Hadith that he will emerge from between Syria and Iraq, and his emergence will become known when he is in Isfahaan. He will be of Jewish origin and the Jews of Isfahaan will be his main followers and they will refer to him as the Messiah. As he goes on through the world, Jews and a great number of non-Jews, especially women, will flock to him upon witnessing his false miracles.

Imran ibn Hussain (may Allah be pleased with him) narrated from the Prophet Muhammad (peace & blessings be upon him), “Those who hear about the Dajjal should stay away from him. By Allah! A person will approach him thinking himself to be a believer. But on seeing his amazing feat he will become his follower.” (Abu Dawood)

“The Beast was taken and with him the false prophet who wrought miracles before him with which he deceived them.” (Revelation:19)

The miracles and feats spoken of by the Prophet (peace & blessings be upon him) and John, the writer of the Book of Revelations, are further clarified by the Hadith narrated by Hadhrat Huzaifah (may Allah be pleased with him):

Those who obey the Anti-Christ will enter his Paradise (and thus enter Hell), and those who denounce him will enter his Hell (and so shall, in reality, be entering Paradise). He will travel by means of a gigantic creature, at impossible speeds. He will cause droughts and famine upon those who reject him. Yet the remembrance of the true Lord will satisfy them.

Ubadah ibn Saamit (may Allah be pleased with him) narrates from the Noble Prophet (peace & blessings be upon him), “If you still have any doubts regarding him (the Dajjal), then remember, your Sustainer is not one-eyed.”

Ibn Umar (may Allah be pleased with them)a narrates from the Noble Prophet (peace & blessings be upon him), “Allah is not one-eyed, while Maseeh-ud-the Dajjal is blind in the right eye.” (Bukhari)

He will remain on the Earth for a period of forty days, of which the first day will be as long as a year, the second day as long as a month, the third as a week and the rest will be normal in length. He will try to gain entry to the two holy cities Makkah and Madinah, but the angels who guard them will bar him from them. From there, he will flee to Syria, where he will meet resistance from the forces of Imam Mahdi, the leader of the Muslims. Then shall the battle between Good and Evil begin in earnest.

Imran ibn Hussain (may Allah be pleased with him) narrates from the Noble Prophet Muhammad (peace & blessings be upon him), “There will always be a group of people upon the path of Allah, overpowering their enemies until the order of Allah comes and Isa – peace be upon him – (Jesus – peace be upon him) descends.”

Finally, when the spirit of the Muslims begins to ebb, Isa (Jesus – peace be upon him) will be commanded by Allah to descend from the heavens. He will not descend not as a prophet, but as a follower of the Prophet Muhammad (peace & blessings be upon him) and Islam.

“The Anti-Christ in Christian Theology, the opponent of Christ. The appearance of the Anti-Christ is believed to signal the Second Coming, at which Christ would conquer his opponent. The concept may stem from the idea of conflict between light and darkness, which is present in Persian, Babylon and Jewish literature and which influences early Christian Theology.” (Hutchinson’s Encyclopaedia)

As before, through the medium of the Hadith, the event of Isa’s (Jesus – peace be upon him) return and all that follows has been accurately recorded. He will descend on Mount Afeeq, at a white minaret of a masjid in eastern Damascus. He will descend from the heavens with his hands resting on the shoulders of two angels. His cheeks will be flat and his hair straight. When he lowers his head it will seem as if water is flowing from his hair, when he raises his head, it will appear as though his hair is beaded with silvery pearls.

He will descend during the time of Fajr and the leader of the Muslims will address him thus, “O messenger of Allah, lead the prayer.”

But Isa (Jesus – peace be upon him) will decline with the words, “The distinction of this Ummah is that they lead each other.”