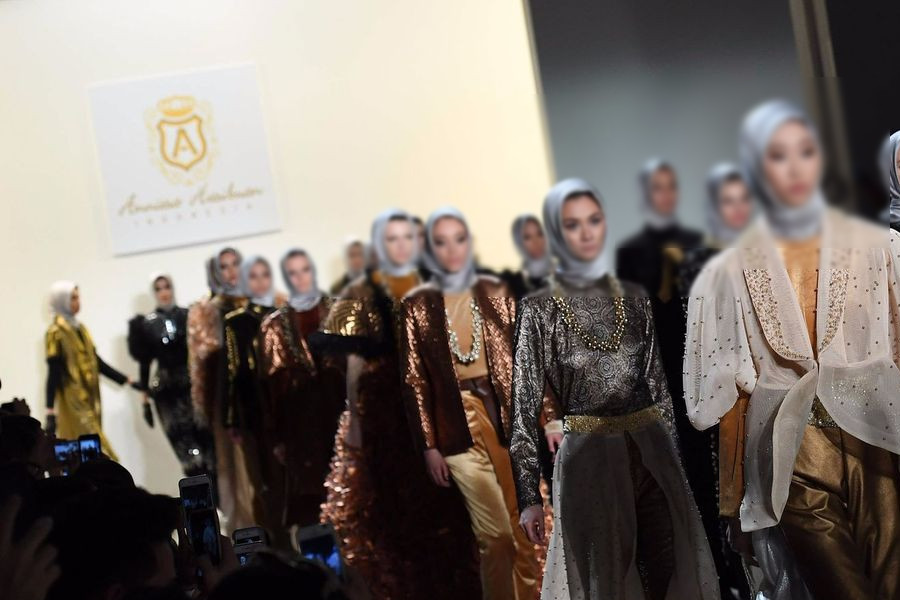 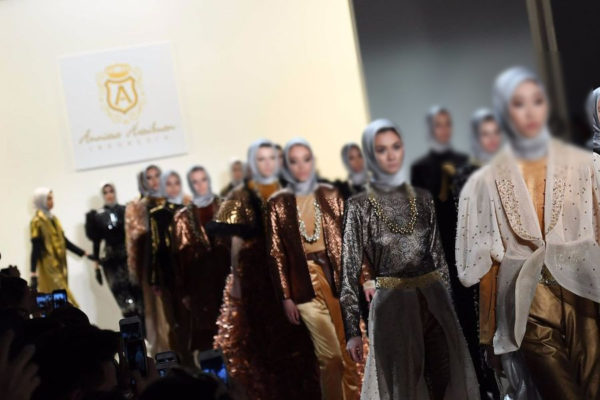 We are coming to the end of September. The fashion houses, designers, models and bloggers who spent early autumn at the fashion weeks in Paris and New York, London and Milan, have almost packed up and gone. New collections have been shown and analysed, their offerings seeping into the industry, introducing new trends or building on existing ones.

This year, the modest movement continued to exert its influence both on and off the catwalk, as show attendees found evermore creative ways to cover up.

Modest fashion is a loosely defined look derived from the clothing and style worn by Muslim women. It’s a concept with no strict rules beyond the obvious, and differs from individual to individual, depending on how they interpret religious guidelines. Predominant modest styles include layering, loose silhouettes, higher necklines and outfits that don’t accentuate the shape of the body.

Even though modest clothing has not been a feature of the mainstream fashion industry or of advertising campaigns, Muslims have huge spending power when it comes to clothing.

According to a report by Thomson Reuters, Muslim clothing and footwear expenditure is expected to reach $484 billion by 2019, accounting for 14.4 percent of global spending.

But some observers now question the fashion industry’s current interest in modest clothing.

From street to fashion runway

Modest fashion first emerged in 2011, when Muslim bloggers and influencers, including Dina Torkia and Amena Khan in the UK and Ascia AKF in Kuwait, countered stereotypes of Muslim women as being oppressed and showed that modest dress need not be boring.

The trend had started in Indonesia and Malaysia, where a lucrative market for modest fashion had existed and was showcased as the norm by bloggers such as Dian Pelangi.

The profile of the movement is most evident on runways at major shows, where the increasing number of modest influencers, designers and models demonstrate how significantly the market has grown and how it is in turn shaping the mainstream.

One notable presence at New York Fashion Week in early September was IMG Models’ Halima Aden, representing Harpers Bazaar and Calvin Klein. The Somali-American model, who was born in a Kenyan refugee camp and has appeared on the cover of British Vogue, initially made headlines for wearing a hijab during a Miss Minnesota beauty pageant.

In New York, Aden wore a striped cape and matching trousers to the Harper’s Bazaar Icons party, while at the Calvin Klein show she went with tailored white trousers, paired with a high neck polo knit and a black long-line jacket.

In Milan, where she represented Max Mara, Aden wore a polka-dot trench coat with a matching headscarf and dark sunglasses, tying in with the theme of women and power, inspired by Greek mythology.

Speaking to Vogue Arabia, she said that modest fashion is not just a passing trend. “It’s not just a way of dress, it’s a way of life… as the origins are often from religious beliefs, it’s a trend that here to stay”.

Among fashion show audiences, the number of journalists, influencers and bloggers with an interest in modest clothing has likewise risen.

Zaynah Ahmed, a British-based blogger and modest fashion influencer who boasts more than 100,000 followers on Instagram, says she started posting her looks on social media because she wanted to show people that they don’t have to be boring in their fashion choices if they want to be modest. “I wanted to show that it’s possible to look good, feel good and still be completely covered up,” she says.

According to Ahmed, social media has been a key tool in the increasing access for bloggers and modest fashion influencers on the circuit.

“It’s great that we’re being recognised in the mainstream industry,” she told MEE. “Social media and the rise of modest fashion bloggers has shown the industry how much influence we have, hence they now collaborate with us to reach the Muslim market.

“If it wasn’t for the bloggers and social media I don’t think we would have that many modest options to choose from in shops. They now cater for us”.

Bloggers are also appearing in front of the camera. Dolce & Gabbana announced fashion and beauty blogger Ruba Zai as the face of its new campaign for a collection of luxury abayas and scarves in 2017. Zai, who has amassed more than one million followers on Instagram and is of Afghani descent, shared images of the shoot in Morocco on her social media accounts.

Zai regularly makes videos for her YouTube channel of over 400,000 subscribers, ranging from makeup looks to how to style a hijab.

Speaking to NOS, Zai said: “I received an email from Dolce & Gabbana saying that Stefano likes my style and wants to work with me… it was truly a dream come true.

“For other hijabis, whether they are influencers or not, it shows that anything is possible, even with a hijab”

But many bloggers and influencers are wary of the mainstream’s embrace of modest. Instead, they want to reclaim a movement they fear is being monopolised by fashion brands as a way of bolstering politically correct credentials and entering into the Muslim market.

The financial potential is there: Middle Eastern visitors to the UK spend more than any other demographic on clothes, the Financial Times reported back in 2014. Visitors from Kuwait averaged £4,000 ($5,229) per visit while Qatari tourists spent around $3,920. Most of that money went on high-end fashion brands, which in turn has influenced how the industry now sells itself.

Dina Torkia, the Cardiff-based author of the recently published Modestly, said in 2016 – just before modest went mainstream – that she “can’t help but feel incredibly underwhelmed, possibly even a tiny bit insulted by the [D&G] collection”.

She added: “Muslim women in the form of bloggers, designers and stylists have been taking centre stage for a good few years, showing the world that modesty and style can coincide with faith with barely a nod of applaud or recognition, until D&G fancies putting their stamp all over a very traditional Middle Eastern style and claim its originality.”

Zaynah, who started posting her modest outfit looks in 2013, told MEE: “They are cashing in on Muslims as it’s a known fact that as a Muslim community we have a large expenditure on fashion and they are taking full advantage of this.

“It feels nice that we can walk into shops and actually find more than one item which is modest, but they’re not doing this for us, they’re doing this for their profits.”

Reina Lewis is Professor of Cultural Studies at London College of Fashion and the author of Muslim Fashion: Contemporary Style Culture. She decided to write about Muslim fashion as she believes that after 9/11 too much media attention focussed on stereotypical orientalist images of Muslim women, such as the mystery behind the veil.

“What I saw was that Muslims were increasingly being asked to declare themselves as good, ‘moderate’, Muslims, versus bad, ‘extremist’, Muslims,” she told Historie de Mode.

Lewis said that Muslim fashion refers to a particular cohort of young women in Muslim-minority countries who cover their heads, often with a headscarf, and were doing this through participation in mainstream fashion cultures.

She said that Islamic branding and Muslim marketing were now growth areas.

“The fashion industry has disregarded Muslim women as fashion consumers for a long time and it is now beginning to wake up to that. On one hand, Muslims are very pleased to be marketed to, on the other hand I think we are going to see more critical responses to that as well.”

Stories from Arabia: Bridging the gap

Modest and Arabian fashion influence continued through to London Fashion Week in mid-September, where designers from the Middle East showcased their collections.

Stories From Arabia is a fashion platform: this year it represented eight designers at London Fashion Week, featuring a plethora of embroidered designs, Moroccan-style kaftans, fluid silhouettes and beaded gowns.

Jalila Elmastouki, its founder, told Fabuk Magazine earlier this year that the platform “creates that bridge between Arabia and the Western World to change the way people think about the region and to support Arab designers by making their work accessible to a British audience”.