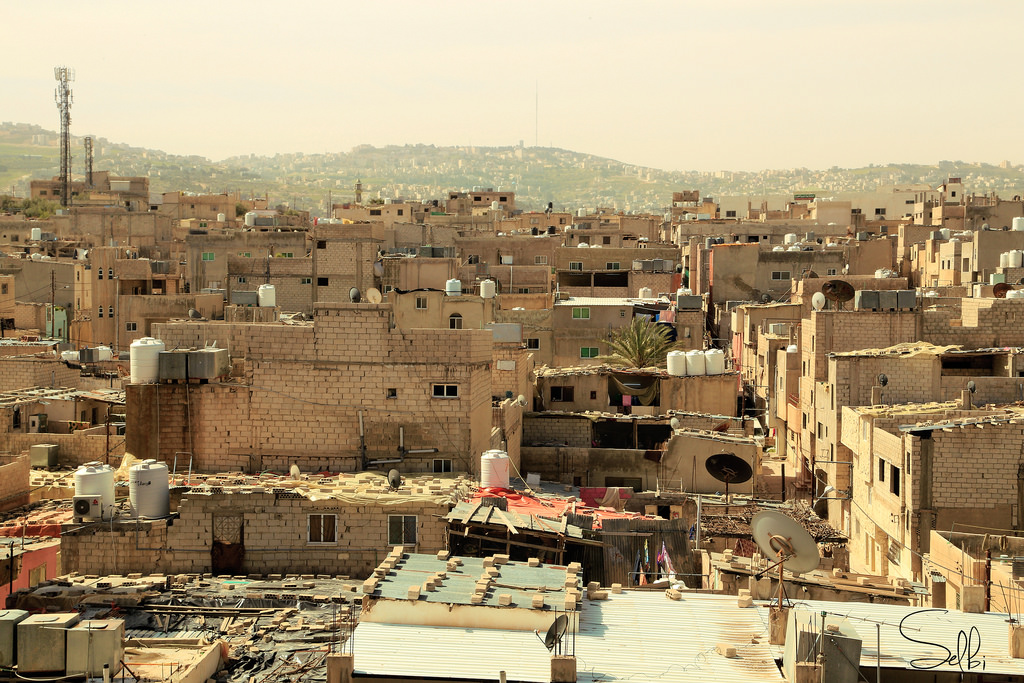 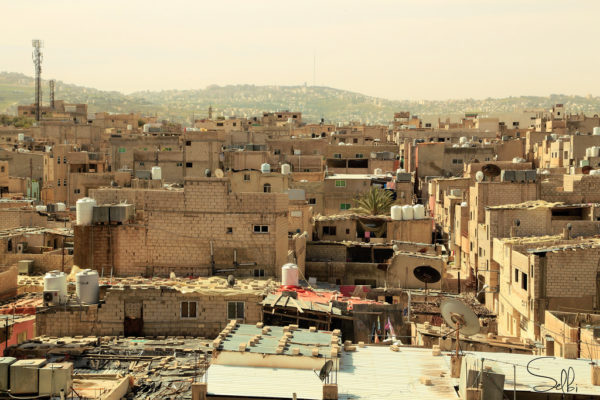 BAQAA REFUGEE CAMP, Jordan – It is half an hour’s drive from the Jordanian capital of Amman to Baqaa, where 119,000 Palestinian refugees have lived since the refugee camp was set up in 1968.

It is the largest Palestinian refugee camp in Jordan and one of the United Nations Relief and Works Agency’s 10 officially registered refugee camps in the country.

The camp lies 20km north of Amman and sits on a low ground where rainwater gathers and pours in from the surrounding mountains.

Greenhouses and crops of tomatoes, olive trees and citrus fruits enclose the camp and form its borders.

Kathem Ayesh, the head of the Jordanian society for return and refugees, and once an UNRWA employee of 27 years, said there was an artesian aquifer under the 1.4km square of Baqaa camp, leased by the Jordanian government.

“If you dig two or three metres underground you will find water,” Ayesh said.

A two-bedroom flat of 100 sqm in Baqaa would cost around 18,000 Jordanian dinars ($25,000). A considerable sum for any resident in the camp, considering a business graduate employed at a bank in Amman would be paid the equivalent of $564 a month.

But political stability and financial prosperity are well out of reach for Baqaa and its residents.

Just one year after the camp was set up, Jordanian armed forces bombarded and invaded Baqaa’s streets after clashes erupted in Amman between the Palestinian Liberation Organisation (PLO) and Jordan’s army in what became known as the “Black September” conflict.

The conflict resulted in the PLO moving its headquarters to the Lebanese capital of Beirut, and Jordanian King Hussein regaining control over areas captured by Palestinian fighters.

Like Baqaa, which is easy to monitor from the surrounding mountains, most refugee camps in Jordan are built in an open lower ground for security reasons.

Baqaa and other refugee camps were left to UNRWA after Black September, losing Palestinian factions direct aid and support.

UNRWA, established on 8 December 1948 following the Arab-Israeli war, is facing a shortfall of $250m after the United States cut its funding last year.

It held a pledging conference on the 25 June in New York, after moving the conference’s date from December to June to allow time to find new funding sources that would keep its facilities working.

US aid to UNRWA has been its saving grace for years. The US has been the largest single donor, providing more than $364m last year. The next largest, the EU, gave less than half that figure.

Its mandate was to carry out relief programmes that responded to the needs of almost 750,000 Palestinian refugees who were expelled by Zionist gangs from their villages and towns in 1948.

It now provides assistance to some 5.4 million Palestinian refugees registered in Jordan, Syria, Lebanon, the West Bank and the Gaza Strip, where it began operating in 1950.

Saudi Arabia is the largest Arab funder, and fifth on UNRWA’s donor ranking, with $53m. Jordan, which hosts the largest percentage of Palestinian refugees, donated $62,000 while the Palestinian Authority donation was $3.7m.

Ayesh was the head of UNRWA’s workers union and headmaster of Baqaa Elementary School for Boys for 25 years. He sees UNRWA’s importance as embodying the Palestinian refugee problem and their right of return.

The school where he taught and managed was called al-Madrasah Al-Siniah, and was built by the Chinese government in the 1970s.

“UNRWA has stopped, even before Trump cut the funds, providing good services to Palestinian refugees in Baqaa and elsewhere. Those refugees had to find other institutions like NGOs for help,” Ayesh said.

“By ending UNRWA, Israel and the US are looking to end Palestinians’ right of return. This is the final goal they want to achieve.”

Ayesh said that school classrooms in UNRWA’s schools have become crowded over the years and ended up with 45 to 50 students per class. But still, UNRWA provides students school textbooks for free.

“In the 1970s, the school were providing stationery for the students, but with the funding crisis, the services were minimised,” Ayesh said.

UNRWA has adopted UN General Assembly Resolution 194’s definition of Palestinian refugees as “persons whose regular place of residence was Palestine during the period 1 June 1946 to 15 May 1948, and who lost both home and means of livelihood as a result of the 1948 conflict”.

The resolution states that Palestinian “refugees wishing to return to their homes and live at peace with their neighbours should be permitted to do so at the earliest practicable date, and that compensation should be paid for the property of those choosing not to return”.

Israel refuses to allow Palestinians to return to towns and villages that are inside the 1949 armistice border that separates the occupied West Bank and Gaza Strip from lands controlled by Israel in 1948.

Ayesh’s family was forcibly expelled in 1948 from Miska, a village southwest of Tulkarem. His family sought shelter in the city of Nablus in the West Bank, where he finished his schooling in 1973.

He then completed a BA in chemistry and an MA in education at the University of Jordan, before working as a teacher and then headmaster in UNRWA’s educational system from 1981.

He lived on the other side of Baqaa refugee camp, and he and his children received UNRWA’s services.

Ayesh believes that UNRWA had served the Palestinian national cause without intentionally wanting to do so.

“UNRWA maintained throughout the years a kind of identity that gathered Palestinians up till the 1960s, when Palestinian political organisations were founded. It also kept the refugee problem that is still pending an international solution alive. It also still speaks about UN Resolution 194,” he said.

UNRWA is a subsidiary organ of the United Nations General Assembly, and its mandate is renewed every three years.

Ayesh sees UNRWA’s final aim as assisting Palestinian naturalisation in the countries they ended up refugees in.

“UNRWA is not a Palestinian organisation, but an international one, thus it provided services to Palestinians as refugees to help them feel at home in the countries they fled to, and [where they] eventually naturalised. But this did not work out. Jordan refuses to be transformed into an alternative homeland for Palestinians, despite Israel’s ambition to do that, and Palestinians want their right of return.”

Ayesh said that if UNRWA was shut down chaos would erupt in Jordan, where the state institutions are weak and cannot afford to provide assistance to Palestinian refugees.

UNRWA’s Center for Women Programme was shut down recently in Baqaa due to a funding shortage. Ayesh added that since 2012 UNRWA employees had not received any salary raises.

Abdelrahman Hammad, a shopkeeper in Baqaa’s market, sees UNRWA’s funding crisis as part of US President Donald Trump’s “deal of the century”.

“It is not a deal, but an attempt to eliminate the Palestinian cause and the right of return. The deal of the century does not mean anything to me,” Hammad said.

Baqaa’s market is set up on what should be the main street, where cars should drive, and Hammad’s shop is on the corner of two main market roads.

“Things have changed in Baqaa. People are frustrated. Yes, you don’t see demonstrations on Land Day as before, but this might change any time,” Hammad said, referring to a major day for Palestinian protests against their loss of land and rights.

Hammad is from the Gaza Strip, and unlike Ayesh he holds a temporary Jordanian passport, which means he can’t vote and has to renew his passport every five years.

His father came to live in Baqaa in the 1980s, after travelling to Egypt and Libya for study and work. Hammad’s family are refugees from Ibdis, a village northwest of Gaza City that was destroyed in 1948.

He believes that UNRWA’s role is over-exaggerated.

“UNRWA is a small and secondary player in the region. Its role is not major and it adapts to political conditions, not the opposite. Who governs UNRWA is really the funders, not the UN,” Hammad said.

Ayesh resigned from UNRWA in 2008, after he was given an option between his job and his membership of a political party. He speaks about internal tensions between UNRWA’s management and its local Palestinian workers.

“All the general commissioners since UNRWA started are foreigners. None of them was a Palestinian or an Arab. Why?” Ayesh asked.

He added that, as an UNRWA employee, you can’t express you national thoughts and political ideas, in the name of “objectivity”.

“UNRWA is always afraid of being castigated by the Zionist entity [Israel] as an organisation that supports violence and terrorism. This is the reason that you are silenced if you are an UNRWA employee when it comes to political thoughts. UNRWA’s management believes that foreigners are willing to be objective in their work while Palestinians can’t,” Ayesh said.

UNRWA’s employees are banned from expressing any political thoughts on social media.

A worker at UNRWA’s headquarter in Amman, who refused to give his name, said that “you can’t talk to media about a strike or complain about the management, otherwise you will be punished”.

His salary is good and UNRWA’s health insurance covers 80 percent of medicine and treatment. But, for him, Palestinians cannot live by bread alone. Political free speech is vital to him.

He referred to a mural drawn recently on UNRWA’s building in Baqaa and which was defaced because “it carried Palestinian national and political symbols”.

“You have to live as a refugee without identity and national and political thoughts, according to UNRWA. In the name of objectivity, you are being silenced and we refuse this,” he added.

Chris Gunness, UNRWA’s spokesperson, confirmed to the Middle East Eye that any employee on a UN payment roll could not combine membership of the political party and his job.

“Anyone who receives an UNRWA cheque is not allowed to be a member of political party, even me. Also, you have to assign to UN values regarding expressing your thoughts on social media,” Gunness said.

He conceded that none of UNRWA’s general commissioners had been Arabs or Palestinians since the agency was founded.

“General commissioners are appointed by the UN secretary-general, who decides who to choose, not UNRWA,” Gunness said.