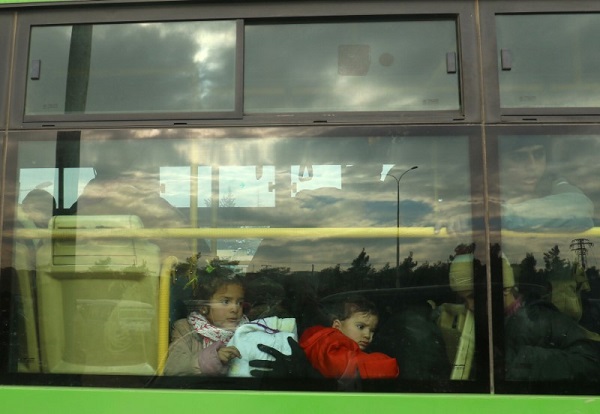 Evacuees from rebel-held eastern Aleppo arrive by bus to an area on the western edge of Aleppo city. REUTERS/Ammar Abdullah

The conflict in Syria has returned to our screens this festive season, with heartrending footage of desperately ill children needing immediate evacuation from one of the last rebel-held enclaves. There were pleas from charities and churches, from the UN (via its humanitarian coordinator) and from the Pope (in his Christmas message) on behalf of all children in war zones.

And who in their right mind could object? Who would be so callous as to deny a cancer-stricken toddler safe passage for the few crucial miles to Damascus that could save her life? Who would resent charities and churches capitalising on the festive season in the hope of curbing suffering and saving lives?

Well, with Syria, we all know who, don’t we? Big bad Bashar al-Assad, still hanging on as President of Syria; his Russian ally, Vladimir Putin, and their mutual friends in Iran – and it was to these villains that the UN coordinator, Jan Egeland, a British charity adviser, Hamish de Bretton-Gordon, and others had addressed their public appeals.

Within a day or so, however – and perhaps contrary to their expectations – a seasonal miracle happened. Three small children and a man needing a kidney transplant were on their way out of eastern Ghouta. Another 25 patients – of around 200 on evacuation lists – were preparing to follow. At which point, it might perhaps be noted, all mention of Assad et al was dropped. Could it have been that, by seeming capable of the merest vestige of humanity, his value as an emblem of iniquity had been lost?

Even as the first convoy was revving up, however, it also turned out that the whole picture was a bit more complicated than the Christmas news stories had suggested. Jan Egeland was back on the airwaves, warning that children waiting for evacuation could be used as bargaining chips. There were reports, he said, that those being allowed to leave were, in effect, being exchanged, one for one, for government officials held captive by the rebels in their enclave.

Mr Egeland objected – as he was entirely right to do – that evacuation on emergency medical grounds is a right, and that nothing should be allowed to diminish it. Alas, though, this is not how the world works, least of all this particularly messy part of the world engulfed in a civil war. You can appeal to law as much as you like, but if there are individuals in acute danger, especially children, and if there is a deal to be done, this is what – like it or not – will generally happen.

As the conflict in Syria has dragged on, it has reminded me of nothing more than accounts of the Thirty Years War in Europe, and the spare dramatisation of that meandering conflict in Bertolt Brecht’s Mother Courage and Her Children. On the edges of the fighting, a whole war economy soon evolves, which demands immediate quid pro quos. It is an economy in which people and goods alike assume a value to both sides, and trade will go on under those brutally basic rules until a new order is eventually established.

Now it is entirely admirable that many people – and perhaps most of those blessed never to have lived through war – will demand that children, all children, be spared the experience of a war that is always and only the fault of adults. Look how successfully charitable campaigns, whether for evacuations or asylum, focus on the plight of children. There is a view that saving the children has to be the only, or at least the overriding, objective and the simplest expression of right and wrong. And it seems to me that this absolutist argument is entirely defensible.

The trouble is that it really is not that simple, especially not in a war that appears, as in Syria, to be reaching its endgame. The sick children highlighted this Christmas are among an estimated 400,000 people trapped in eastern Ghouta, one of the last rebel-held areas of the country. It is reported that conditions there have deteriorated drastically over the past two months. Food, medicine, fuel – everything is running short, as the forces of Assad tighten the noose with a view to driving the rebels out.

What is more, the dilemma for opponents of Assad and their supporters, and for aid organisations working in and around eastern Ghouta, is the same as it was in eastern Aleppo, as in Idlib, as elsewhere. How long do you help the besieged population to hold out? How far do you negotiate for temporary respite to get food and medicine in and sick children and others out, if defeat is probably inevitable? Do such efforts not just extend the humanitarian disaster, for children as for everyone else? At what stage is it in fact wiser, more humane in fact, to surrender or sue for peace?

Which is where international charities and other NGOs of today, not to speak of proxy foreign interventions, can be a complicating factor. Those who argue that food, medical and other aid is purely humanitarian and carries no political or military significance may speak in good faith, but assistance even of this kind can tilt the advantage. There is almost no assistance, humanitarian or otherwise, that will not affect comparative power in some way, and the combatants on all sides know this full well.

Something similar applies to “law”. It may be unlawful to target hospitals, but what if a hospital is used as a safe haven for combatants? Yes, they are. And children can be exploited in combat, not only, despicably, as child soldiers but for propaganda. Remember seven-year-old Bana al-Abed of Aleppo?

The siege of Aleppo, in fact, ended in classic fashion, with a military victory and a deal that allowed rebel fighters free passage to rebel-held territory. But how many lives could have been saved and how much suffering reduced if there had been less outside assistance, both material and moral, to the rebels?

The United States quietly ended most of its military support to anti-Assad rebel groups recently, and it is not clear whether the UK followed. But it is not only military support that prolongs a conflict. Other forms of assistance can do so, too, even when labelled humanitarian and neutral; even when the beneficiaries are sick children. Such is the cruel, undiscriminating, reality of war.