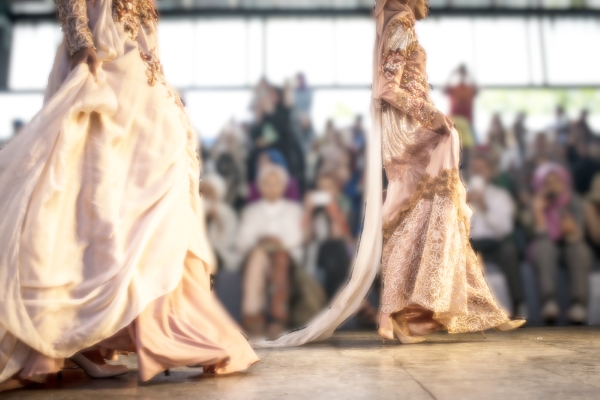 Twice so far this year London has held a “modest fashion” week, most recently this month. Modest fashion is also known as Islamic fashion and takes inspiration from the more modest way devout Muslim women dress. Think covered hair, flowing lines and a riot of colour inspired by African, Asian and Arab heritage.

Of course, Islamic fashion is a niche market, but one with potentially mass appeal: the figure frequently quoted is that the global Muslim clothing market is US$300 billion per year. Both luxury and high street brands have jumped on the bandwagon, from Dolce & Gabanna and Oscar de la Renta to H&M and Marks&Spencer.

Established fashion labels look at the numbers of rising middle-class consumers across the Islamic world – potentially hundreds of millions of people – and salivate over gaining a slice of it.

Yet Islamic fashion is potentially far more interesting than other niche market segments. In some ways it upends the traditional direction of fashion – the exposure of more and more flesh, let’s be honest – while at the same time working with the grain of global capitalism. (If you don’t believe this marriage of Islamic fashion and capitalism exists, ask any woman from the Gulf how much abayas can cost.)

Fashion is highly sexualised. There is a very particular view of women’s bodies that is sold as desirable and fashionable. Modest fashion doesn’t opt out of that paradigm – indeed it brings with it its own sets of rules – but it does change it.

How does it change it? By offering different ways to be fashionable – and by proving that women aspire to look well-dressed outside of the received views of what is fashionable.

Women who at the moment find that high street fashion isn’t built with them in mind – older women, those with plus-size bodies, those who simply don’t want clothes that fixate on their curves – will find that the desire to tap into the market of Muslim women will also lead stores to cater to their needs too.

Islamic fashion will not only find favour with women who appreciate flowing lines and covered hair, regardless of religion, but it will also lead to a more segmented fashion market. High street designers will gradually find it normal to release, for example, a “bohemian festival” line of summer clothing, with designs in the range that cater to modest wear customers and those with plus-size bodies. The whole notion of fashion as one industry with one set of rules will change. That’s the good news.

Now the bad. Those who are cheerleading modest wear because they believe it will undercut what they see as the current fetishisation of the female body in mainstream fashion will be disappointed. Those who think fashion today is oppressive will find modest wear, despite its origins in faith, can be just as unforgiving.

In fashion today, designers already compete to reveal women’s bodies – the “barely there” underwear, curve-clinging trousers, dresses that are skirts and skirts that are belts. Such competition is essential to the business of fashion, because it creates the desire to buy more and different clothes, to “compete” with other women over who looks the best. (Put like that, the fashion world sounds starkly amoral. It is.)

Over time, the market will also make modest wear more “competitive”. The choice of clothing offered will be such that women will either compete on price (the more expensive the scarf, the dress, the shoes, the better), or emulation (how closely can modest wear replicate the look of more mainstream fashion), or on something else, perhaps an ethnic or religious identity (how authentically Arab or African is the clothing). This will create its own set of expectations for how women should dress.

Those who think modest wear will remove women from the treadmill of female beauty standards are about to receive a harsh lesson in capitalism and society.

For some women, the whole idea of fashion, particularly western fashion, is oppressive. The necessity for women to be perfectly turned out, arms and legs devoid of body hair, covered in make-up, lipstick and hair product creates an impossible and unnatural standard of beauty that, when unmet, leaves women feeling unworthy.

Modest wear, it is believed, will change that, and remove such oppressive beauty standards. Unfortunately, modest wear will do nothing of the sort. While it will change the accepted norms, it will only change them, not remove them completely. In every society that has a different set of beauty norms, whether those norms are based around the hijab, the sari or the kimono, these norms can be quite exacting.

Society’s desire for women to dress a certain way, and for the wider society to judge even small infractions of those rules, seems fairly universal. Some will call that sexism, others the patriarchy, others human nature. It seems to me that it is perfectly possible to change that desire to police the way women dress. But I doubt modest wear will do that. Modest fashion will only change the rules. The very existence of fashion rules will not be broken any time soon.