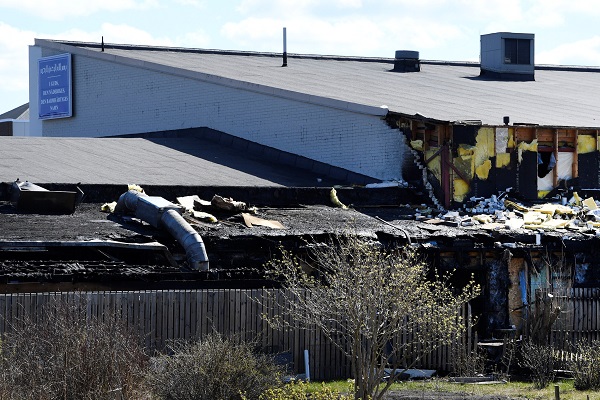 Parts of the Imam Ali mosque in Jarfalla north of Stockholm, Sweden has been destroyed in a fire during the night of May 1, 2017. Anders Wiklund/TT News Agency via Reuters

STOCKHOLM (Reuters) – Swedish authorities arrested a man brought in for questioning about possible arson on Monday after a fire damaged a Shi’ite mosque on the outskirts of Stockholm overnight, a police statement said.

Nobody was injured in the fire in the Jarfalla suburb of the Swedish capital.

Police said the man had been placed under arrest but gave no further information. It did not identify the suspect.

Swedish authorities are wary of possible reprisals after a man rammed a hijacked beer truck into a busy downtown pedestrian mall last month, killing five people. An Uzbek whose asylum request was rejected is being held as the main suspect.

Islamic State, a radical Sunni group that has targeted Shi’ites in several countries, claimed responsibility for a fire last year at a small Shi’ite mosque in Malmo in southern Sweden.

The main suspect in the case was accused on terrorism charges but has been acquitted.