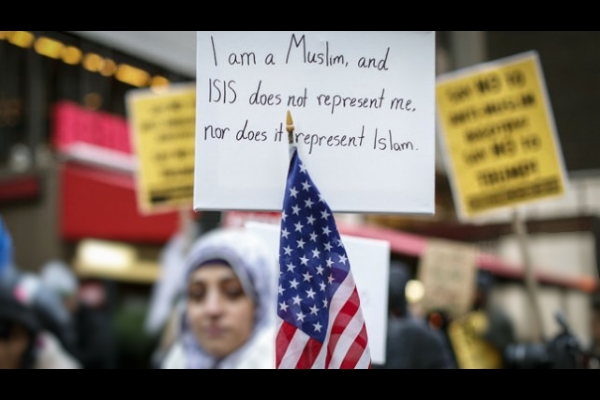 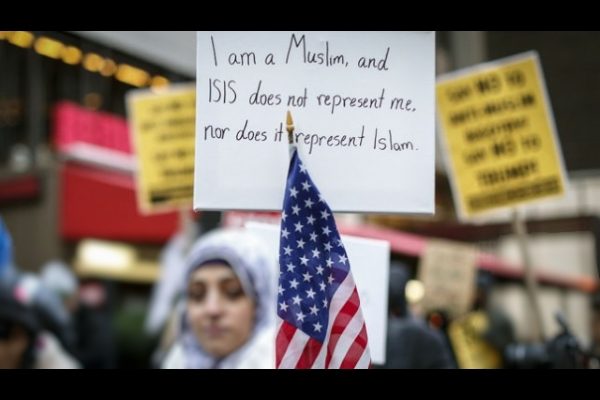 For what, exactly, are American Muslims apologising?

What sin have they committed as a collective, to be pushed into this wretched state of being – having to demonstrate their humanity, defend their religion and distance themselves from every act of violence, even if only allegedly committed by a Muslim, anywhere in the world?

Long before the malicious “Muslim Ban” was first approved by the Donald Trump administration – banning citizens of seven Muslim-majority countries from entering the United States for 90 days – Muslims in the US have always, to varying degrees, been embattled: collectively demonised, racially profiled by government agencies, and targeted in numerous hate crimes by other Americans.

The seemingly sudden realisation by various liberal groups that American Muslims are mistreated in their own country is hardly convincing.

In a sense, it is also patronising, for the cause of the defenceless Muslim is now being used as a political tool, where Democrats and others are attempting to undermine the deplorable actions of their Republican rivals.

But where was this “love” for Muslims and the recognition of their humanity during the administrations of Barack Obama and Bill Clinton? Each of these Democratic Party presidents has a horrific legacy of violence and discrimination against Muslim countries; in fact, against Muslims everywhere.

Is it acceptable then, on the one hand, to kill a Muslim while, on the other, to praise Islam as a religion of peace? In fact, the warmongering Republican administrations of George H Bush and George W Bush did precisely that. Both Bush presidents, at the time, assured us that their wars were never against Muslims yet, somehow, the Muslim death toll has constantly surged since the first Bush went to war in 1990.

In a landmark study released in March 2015, the Washington-based group, Physicians for Social Responsibility, showed that the US self-styled “war on terror” has killed anywhere between 1.3 million to two million Muslims in the first 10 years since the September 11 attacks.

Award-winning investigative journalist, Nafeez Ahmed, concluded that at least four million Muslims have been killed by the US since 1990.

This does not take into account all the killings that have taken place in the last two years.

Yet, we are meant to ignore all of this, to pretend that the issue is merely that of a racist, obnoxious president and that the pinnacle of American violence against Muslims can be reduced to a 90-day travel ban on seven Muslim countries.

Subscribing to this mischaracterisation does not only reflect ignorance, but also complete disregard for the millions of innocent lives that have been lost so that the US may get another chance at preserving its vastly dwindling empire.

At the Democratic Party National Convention (DNC) last July, former President Bill Clinton took the stage to articulate a retort to the Republican party convention’s hate-fest of Muslims, blacks, Latinos and everyone else who did not subscribe to their skewed view of the world.

But Clinton’s words were a mere liberal spin on the same chauvinistic, racist and exclusionist culture that drives the political discourse of the right. “If you’re a Muslim and you love America and freedom and you hate terror, stay here and help us win and make a future together; we want you,” Clinton said, before a large audience, which roared in cheerful applause.

Nothing is as dehumanising for Muslims as to feel that their inclusion, their citizenship and their humanity is conditioned by a set of condescending rules, articulated by the white, Christian elite.

What Clinton has wished to forget is that an estimated third of the slaves who built his country were, in fact, Muslims – shackled and dragged against their will to assemble the US, field by field and brick by brick.

It is the slaves that mainly brought Islam to the US, and it is Islam that armed them with the virtue of patience and strength of character in order to survive one of the most ghastly genocides in human history, ancient or modern. It is precisely because of this that the identity of the American Muslim is, at its heart, a political one, one concerned with human rights, with justice and equality.

Thus, it was no aberration that black Muslims have played a tremendous role in confronting, challenging and clashing with the ruling white elitist order that has controlled the US from the very start.

It is the Martin Luther King, Jr.-Malcolm X pair – backed by millions of black people throughout the country – that helped define the modern character of the black man and woman. They led the civil rights movement, exacting basic human rights at a heavy price and against terrible odds.

The centre of gravity of the struggle for rights in the US might have shifted back and forth between gender, class, race and religious categorisation but, ultimately, it is inspired by the same historic fight of those cast as lesser: The slaves seeking freedom in a society that they had, essentially, built.

The American Muslim, although not always identified as such, has always hovered around the core of that ongoing fight.

It is important that American Muslim youth understands this well – their fight for equality and human rights in their country is not a manifestation of some Democratic Party’s political game. Democratic administrations have historically been on the forefront of wars and mistreatment of Muslims, abroad and at home.

Those aspiring to be the “good Muslims”, the Uncle Toms, the “not all Muslims are terrorist” type, can only hope for second-class status. But those who aspire for true equality and justice ought to remember the words of American revolutionary, Assata Shakur: “Nobody in the world, nobody in history, has ever gotten their freedom by appealing to the moral sense of people who were oppressing them.”

Those who have done the oppressing constantly try to redefine the nature of the struggle of those whom they oppress. For Bill Clinton, the issue is solely Muslim “terrorism”, never the terror inflicted upon Muslim nations by the US through a series of unjust wars that have killed millions.

The coloniser, the oppressor, the invader is always, always blind to his crimes. He can only see the violent reaction – however minuscule – of the people he subjugates.

According to the New America Foundation, alleged “Jihadists” killed 94 people in the US over the course of 10 years, between the years 2005-2015.

It is around this same period that the US has killed nearly two million Muslims – in their own countries.

Yet the government-and-media-driven fear-mongering, anti-Muslim and anti-Islam discourse (for which both liberals and conservatives are equally responsible) has made “terrorism” the leading “fear” among Americans, according to a major national survey in 2016.

Even if we are to argue that the 94 deaths over the course of a decade are a compelling reason for irrational fears and mass phobias, US mainstream media and intellectuals are completely uninterested in unearthing the reasons of why some Muslims may wish to direct their violence against the US.

They do not seem to fathom that every violent act has its roots. They refuse to acknowledge that the death of four million Muslims does matter to someone, and counts for something.

In a typically uneducated piece in the New York Times published a few years ago, Thomas Friedman argued that the problem lies in the failure of the American “narrative” to explain to Muslims that the US foreign policy “has largely dedicated to rescuing Muslims or trying to help free them from tyranny”.

It is the failure of the “narrative” that is allowing, according to Friedman, the “jihadists to obscure” the otherwise US charitable rule in the Muslim world.

Unsurprisingly, the New York Times, and Friedman, in particular, have cheered for all of America’s bloody wars and military interventions, backed Israel’s wars against the Palestinians and have historically whitewashed the crimes of the American empire as virtuous, moral and driven by human rights and democracy.

Now, the New York Times, along with other liberal media, is vehemently opposing Trump’s measures against Muslims and refugees as “un-American” – a term that can only be truly understood within the context of intellectual hubris, not historical fact.

American Muslims should not attempt to seek validation for their rights and identity from American liberal media, politicians and groups.

They must quit trying to humanise themselves, from distancing themselves from their own brethren around the world and ameliorating their religion. Instead, they should seek solidarity with other marginalised groups that are also targeted, victimised and forced to live in fear. It is solidarity that they need, not constant apology for who they are.

American Muslims should seek true, strategic solidarity with African American groups (millions among them are Muslims, as well), Latino and Native American communities and nations.

These groups have a shared history of pain that has overlapped for many years and many generations. Besides, the American Muslim identity was born and moulded in the heart of a painful struggle, from the moment a Muslim slave took his first step into the US, to this day.

The protracted nature of their struggle requires intellectual courage, political unity, intersectionality and solidarity, all articulated in purely revolutionary thinking.

In his book, Wretched of the Earth, one of the 20th century’s most powerful revolutionary voices, Frantz Fanon, wrote, “Each generation must discover its mission, fulfil it or betray it, in relative opacity.”

For this generation of American Muslims, this is their moment: To discover and fulfil their mission, to define and assert who they are as the descendants of slaves, immigrants and refugees – the three main building blocks of the US.

Either that, or they will continue to foolishly scramble for validation from those who have oppressed them in the first place.

Ramzy Baroud has been writing about the Middle East for over 20 years. He is an internationally-syndicated columnist, a media consultant, an author of several books and the founder of PalestineChronicle.com. His books include Searching Jenin, The Second Palestinian Intifada and his latest My Father Was a Freedom Fighter: Gaza’s Untold Story. His website is www.ramzybaroud.net.