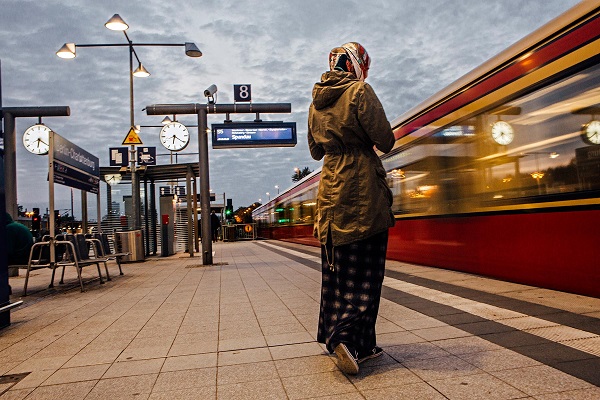 Angela Merkel, speaking Tuesday at the Christian Democrat party conference, gave her support to a proposed ban on Islamic face veils in Germany, calling them “not appropriate here” and saying they should be banned in the country “wherever legally possible.” The ban is backed by right-wing nationalists and an increasing number of populists grown fearful of immigrants. The proposal was prompted after an Afghan teenager who sought asylum in the country raped and murdered 19-year-old college student Maria Ladensburger this October.

This signals an abrupt shift to the right for Merkel, who just last year opened Germany to over a million asylum-seekers, most of them Muslims from regions ravaged by war. That humane decision, though — the “Welcome Policy” — was immediately savaged by far-right and nationalist groups, and soon enough, a pretty big portion of the public.

Merkel — a conservative who’s been Germany’s Chancellor since 2005 — is again up for re-election next year. She’s going to have to take up what’s now become an all too familiar fight against a surge of far-right nationalism in her party. She’s probably most worried about the far-right Alternative for Germany party (AfD), which won a startling 145 seats in the latest state elections and touts an extreme anti-Islamic platform that calls for bans on face veils, minarets, calls to prayer, and other Islamic symbols and practices. Their slogan: “Islam is not part of Germany.”

This is probably the first of many signals Merkel will send to her base in coming months as she dusts off her conservative credentials and tries to shore up more support from the right, so it’s unclear whether she’s being cynical or serious. No matter — there’s a lot more to it when you look closer. The ban is about much more than politics, violence, or terrorism. It about much more than women’s rights, even. It’s about identity — what it means to be German or European.

I’ll go further: It’s about what it means to be human. Given the history in that part of the world, this terrifies me. I know that sounds sensational and clickbaity, but let me explain. See if you agree.

What the ban will do

First of all, the ban wouldn’t do much. There are a little less than five million Muslims in Germany, and experts estimate that none of them wear a burqa, which covers not just the full body but has a beekeeper-ish mesh over the eyes as well. And only a few hundred Muslim women in the country wear another traditional full-face veil, called the niqab. Then there’s the hijab, which is the headscarf alone — no veil. That’s far and away the most popular.

Burqa bans have bounced around Europe for a while. This summer the mayors of several towns in France banned “burkinis,” prompting a major backlash in France and the U.K. before those laws were overturned by the French courts. And to be completely honest, the burqa itself — with its masked eyes — does invoke a reflexive, visceral unease in me before reason takes control. Not proud, but it’s true. It’s something about the covered eyes. There’s an “uncanny valley” effect, I guess. It doesn’t bother me in a cultural sense.

Still, even if the ban is passed, it would affect so few Muslim women that hardly anyone aside from those directly affected would notice. But that doesn’t matter to the far right, because it was never about Muslim women, anyway.

These nationalist messages resonate with voters who see Merkel’s “Welcome Policy” (which has since been halted) as a huge mistake. Many cite violent crimes committed by asylum-seeking immigrants, such as during the New Year’s celebrations in Cologne when an estimated 1,000 women were reportedly sexually assaulted. This week the German government prompted a backlash when it warned the public not to respond to Ladensburger’s murder by attacking or marginalizing immigrants. This also led to accusations — familiar to us in the U.S. — that the media, which didn’t broadcast the story in main headlines, was sacrificing security in the name of political correctness. The next day another asylum-seeker was charged for raping two students.

This merely proves that asylum-seekers are just as capable of committing heinous crimes as anyone else. More to the point, perhaps, is the recent series of terrorist attacks in Germany carried out by asylum-seekers inspired by but unaffiliated with the Islamic State. A shooting outside a McDonald’s at a Munich mall resulted in nine deaths. A suicide bomber injured 15 at a concert. There’s also been a run of knife attacks, which are terrifying to think about.

That shooting, though? Not an asylum-seeker. An Iranian. His parents were immigrants. He was a German citizen, born in Munich.

Sleight of the right hand

There’s a larger political trend in Europe, and really, across the world — see Brexit, Trump, Erdogan, Duterte, etc. Right-wing nationalists are gaining critical momentum and political power, largely because of the “immigration issue.” Germany obviously isn’t immune to this. It’s particularly troubling to see it there, though.

First, Germany is basically the leader of the E.U., and all the more important after Brexit. Germany has the largest economy in the E.U. and third-largest in the world. The fact that right-wing parties are gaining traction there raises the possibility of a potentially devastating “Germexit.”

And I don’t need to dwell on this, but we can’t totally discount Germany’s far-right history. The nation has gone to extremes to confessing that history, vociferously denouncing it, and teaching it in all its blackness and shame in order to stop similar populist movements from ever taking root.

And yet it’s happening. In supporting the ban, Merkel and her more centrist Christian Democrat party acknowledged there is a problem with Islam. Right-wing nationalist rhetoric has seeped into centrist parties: Women in Europe can wear whatever they like — but not Muslim women.

Ah, but I can hear them now: But Muslim countries ban veils, too! And those places are far worse to women!

Those are fundamentally flawed arguments. In those countries the debate truly is about how women should be treated, often in the confines of a shared religion. The veil obviously isn’t perceived there as a threat to their way of life — but to Western nationalists it is. When people in Western countries demand that veils be banned, it’s not about women’s rights at all: That’s a cynical and despicable argument using the very political correctness the right wing despises. That lie is especially despicable when it exploits and twists the name of Maria Ladensburger, a young woman whose rape and murder had obviously nothing to do with a veil. The fact that the response to that crime was a call to ban all face veils says a whole lot.

The real crime here is a crime of identity. It’s what the veil represents. Nationalists might publicly call it violence, terrorism, even immigrants, but it’s much deeper. Islam is the crime. And the crime that Islam committed isn’t rape or murder or terrorism. The crime of Islam is simply being a type of human — a type of human that isn’t fully human. The veil is the perfect target: A faceless people.

This goes way beyond how we or other nations and cultures treat women. This is about who has the privilege of law. The real argument the right wing is making when calling for the burqa ban is that Muslim women do not deserve the full privileges of law. In democracies such as Germany the law is an egalitarian human right.

We are slowly but surely drawing a line between who is human and who is not.

Merkel — who I believe does have noble intentions — will probably keep shifting to the right to secure votes, precisely to fight off the advances of the far right. But her embrace of right-wing policies — even cynically — is tacit complicity in a nationalist ideology and sends a troubling message to the German public. What’s more, these policies will radicalize more Muslims and asylum-seekers, begetting more attacks, begetting more severe policies, and so on and so forth. Right wing nationalism will continue to surge, and sadly, so will violence against immigrants. If this keeps going, that violence will be commonplace.

These veil bans are the first step to dehumanization. It’s ironic, and probably not coincidental, that the veil is literally a mask that covers a human face. The populists in Europe don’t want to see Muslim faces. They want to replace one veil with many, many millions more.