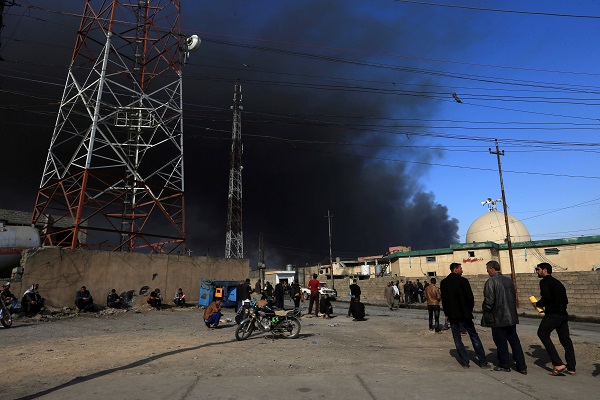 KHAZIR/IRBIL, KURDISH IRAQ – “What about the American election?” asked Abass, a 25-year-old former student from a village near Mosul. He had fled ISIS militants three days before, and moved into a tent in a camp outside the war zones.

It had been more than two-and-a-half years since he stopped going to college after ISIS militants took over the region, but he was still interested in politics.

Like more than a dozen other people, he had gathered around to listen to us interview Ahmed, a grandfather, about what it was like to live in a village under ISIS. Other people in the crowd were chiming in about the war and the militants as Ahmed spoke, but when Abass jumped in, everyone stopped.

Ahmed was next to speak on the issue. “Trump, definitely Trump,” he said. “Trump is strong and will sweep in and destroy all terrorists in Iraq.”

Abass laughed, and said what is more or less the equivalent of “No way man,” in Arabic. “Everyone knows Trump hates Muslims.” At this, the crowd grew boisterous, arguing among themselves gleefully. The vote in the U.S. was still a week away and in their opinion U.S. leadership is directly tied to the security – or complete lack thereof – of the people.

Then-candidate for U.S. president Republican Donald Trump was seen as strong against terrorism, but definitely a racist. Trump’s opponent Democrat Hillary Clinton was hailed for not being a racist, but was held responsible for policies in the Middle East that led to the humanitarian crisis unfolding around them. To what degree she is responsible seemed to sway some people to or from her side.

“How are you even following the elections?” I asked. No one in the crowd had been out of ISIS territory for more than a few days. “You said under ISIS mobile phones are forbidden, satellites forbidden and your televisions were stolen.”

“Radios of course,” answered Ahmed, and then resumed his tale about ISIS walking into his unguarded town and declaring it would now rule in an Islamic way. Two-and-a-half years later, homeless and heartbroken, their rule was anything but Godly, he said.

It was mid-morning here on Nov. 9 when the election results were called and I was surprised how fast my phone lit up. While my American friends were sleeping, exhausted from being glued to the televised election result shows, friends across the Middle East were starting their day.

Zachariah, a Yemeni refugee in Saudi Arabia was the first to send me a Whatsapp message text/emoticon equivalent of chanting, “Trump” in both English and Arabic. As far as he was concerned, a vote for Hillary was a vote for ISIS.

Another friend here in Kurdish Iraq sent word by Facebook, arguing passionately that Trump will be a strong leader against terrorism, and the cacophony of conspiracy theories surrounding Hillary Clinton couldn’t all be wrong. Both candidates were lame, he argued, and at least Trump was smart enough to win, even if it was by using anti-Islamic rhetoric.

A few hours later back at the refugee camp, which had gone from empty to packed in a matter of weeks, there was little talk of the U.S. election. Security forces at the gates were overwhelmed trying to keep order as aid workers and families tried to get in and out.

Driving out of the camp and the military zone that evening, a Peshmerga soldier stopped our car at a checkpoint.” You’re American?” he asked in Kurdish.” Who do you support, Trump or Clinton?”

My colleague translated, and I asked “What’s the right answer?” not wanting to offend the soldier.

“Just say you didn’t vote,” my colleague advised. But before I could answer, the soldier stuck his thumb in the window and pointed up.” Yeah, Hillary,” he cheered.