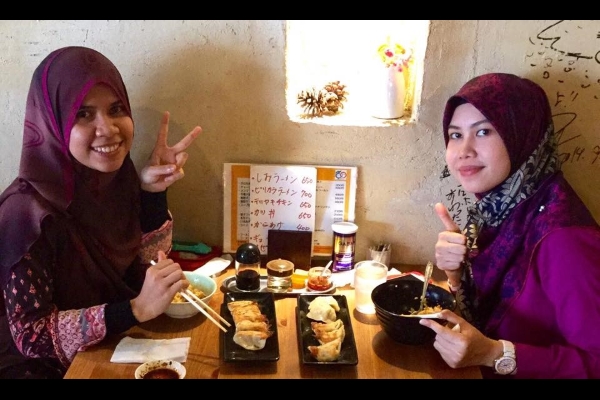 By: Walter Sim Japan, The Straits Times Correspondent In Tokyo

In a humble 70-year-old restaurant in a city two hours north of Tokyo, owner Dainari Goka serves up piping hot bowls of ramen and plates of gyoza dumplings – with a twist.

These dishes are made using halal meats, with chicken as the broth for the ramen, and tempeh (a soy product) and vegetables replacing the usual pork in the dumplings.

Mr Goka, 40, is the third-generation owner of the Nikkoken eatery in Sano city, and has been serving a Muslim-friendly menu since 2000.

“I met an African drummer from Guinea who was in town, and he asked me what was there for Muslims to eat,” he told The Straits Times in a recent interview. “That was what got me interested in what was, to me, a foreign culture and religion.”

He now offers two menus – a regular Japanese menu as well as a Muslim-friendly one – and uses a different set of crockery and utensils to prepare and serve halal meals.

He serves at least 1,000 Muslim customers a year from countries such as Indonesia, Pakistan and Saudi Arabia who in turn leave their mark by penning messages on the wall of Mr Goka’s restaurant.

His eatery is one of many businesses – including hotels and karaoke outlets – across rural and cosmopolitan Japan that have increasingly catered to Muslims, as Japan sees an increasing number of Muslim residents and tourists alike.

There are an estimated 100,000 Muslim residents living across Japan, while the number of Muslim visitors is expected to hit one million by the time Tokyo hosts the Olympic Games in 2020.

The latest available data from the Japan National Tourism Organisation indicates an exponential growth in visitors from countries where Muslims form the majority.

In the first nine months of the year, there were 249,800 tourists from Malaysia, a 33.4 per cent rise from the same period last year, while the number of Indonesian visitors grew by 27.7 per cent to 184,900 over the same period.

A Muslim hotel, Syariah Hotel Fujisan, opened near Lake Kawaguchi at the foot of Mount Fuji in July, replete with a prayer room and halal menus for its guests.

Since June, Japan Airlines has been providing halal-certified Muslim meals on its outbound international flights from Japan.

Tertiary institutions such as Kobe University and Nagoya University, too, have stalls with Muslim-friendly menus in the cafeterias.

Maps identifying Muslim-friendly businesses have been produced for cities such as Sapporo, Kyoto and Osaka, as well as areas in Tokyo such as Asakusa and Shinjuku.

Sekai Cafe in Asakusa has catered to Muslim customers since 2014, and its store manager Noritaka Shibayama, 33, said he communicates closely with his customers to craft his menu.

He has also added a prayer mat to a corner in his cafe.

Likewise, karaoke chain Manekineko has prayer mats in eight of its more than 400 outlets in Japan, including the Yotsuya-sanchome outlet in Shinjuku ward.

Mr Daiki Yamatani, 34, who does sales and promotions for Manekineko, said the firm had observed a gap in the market with an increasing number of Muslim tourists and exchange students in Japan.

The Yotsuya outlet, which markets itself as the first karaoke shop to offer a “halal menu”, worked with a Bangladeshi chef to create a Muslim menu, and also organises monthly events catered to Muslims such as rice dumpling-making.

He admits there was initial scepticism.

“There used to be a lot of fear because of terrorism,” he said, referring to the killing of two Japanese hostages by the Islamic State in Iraq and Syria militant group.

“But there is now growing awareness and curiosity (about) the religion, as the country receives more Muslim tourists,” said Mr Yamatani.

This has led Mr Shinya Yokoyama to start Halal Media Japan as a one-stop portal for Muslim-related information in the country to erase a perception that it was difficult for Muslim visitors to get around Japan.

Its food listings identify, among other things, eateries that are “halal certified”, those that have “halal meals” but still serve alcohol on the menu, and those with Muslim owners or chefs.

“Japan’s halal movement is only just starting, and we want to welcome Muslim people,” he said.