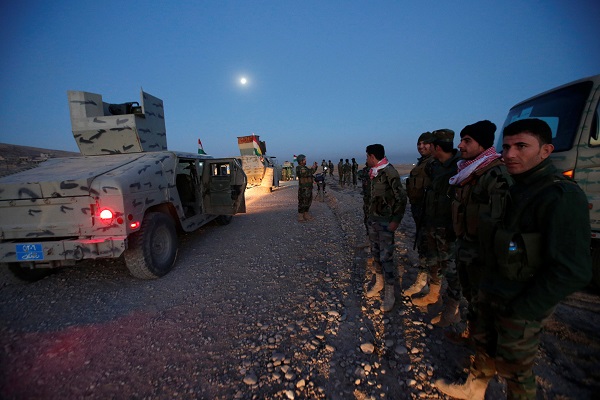 GOGJALI, IRAQ – Iraqi troops were moving cautiously Thursday in a neighborhood just inside the city limits of Mosul, going from house-to-house to ensure the safety of civilians. The soldiers had to be wary of booby-trap bombs as well as ambushes and sniper fire from Islamic State militants, who are being urged by their leader to remain and resist losing the last major city they hold in Iraq.

The breach into the city of Mosul, which IS seized more than two years ago, triggered the exodus of hundreds of families. They started to stream out of Mosul, some carrying white flags, others flashing victory signs at elite government troops with Iraq’s U.S.-trained Golden Division, who spearheaded victories this year elsewhere in Iraq against the jihadists, including at Fallujah.

While locals in the eastern district of Gogjali welcomed their liberation from the jihadists, fears are mounting that, as neighborhoods in the more pro-IS western parts of the city fall to government troops, a cycle of retaliation and revenge will be triggered, both by locals who suffered under the jihadists’ two-year-reign over Mosul and by Sunni militiamen, who have already been accused of carrying out revenge attacks on men and boys in nearby villages suspected of having ties to IS.

Rights group Amnesty International said Wednesday it had received reports of alleged jihadist sympathizers being publicly humiliated, tortured and beaten as fighters with a militia called the Sabawi Tribal Mobilization swept through villages to the south of the city. Lynn Maalouf from Amnesty said there was a “dangerous culture of impunity in which perpetrators of such attacks feel they have free rein to commit crimes and go unpunished.”

Retaliation wasn’t visible Thursday as the elite Iraqi counter-terrorism forces wearing their trademark black combat fatigues sought to consolidate their hold on the Gogjali district and nudge into neighboring ones. Their commanders and a Kurdish peshmerga general overseeing a battle on the outskirts of the Mosul say they are only at the first stage in a prolonged and fierce urban battle, and they are ready for weeks of house-to-house fighting.

Weeks of fighting ahead

They suspect IS militants will blow the five bridges spanning the River Tigris that cuts through the city and will make a final stand in the west of Mosul.

“At best it will take a month — at worst two months,” Peshmerga Gen. Nuraddin Tatarkhan told VOA. Booby-trap bombs triggered mainly by pressure pads are among the biggest danger for advancing forces, as well as sniper fire.

“They keep changing the designs of their bombs,” he said.

A veteran of Saddam Hussein’s army, Gen. Tatarkhan recognizes the military tacticians among the IS leadership as former Baathists and veterans like him of the Iran-Iraq and Gulf wars. Their tactics, he says, will be to drag out the resistance, copying what they did to attack U.S. forces after the ouster of Saddam Hussein. He also warns there are many foreign IS fighters in Mosul — among them battle-hardened and highly fanatical Chechens and Kazakhs who will fight to the bitter end.

The foreign fighters, he says, will likely heed the call by their leader Abu Bakr al-Baghdadi, who on Wednesday broke a nearly yearlong silence with a 31-minute audio recording urging his forces to remain firm in the face of the offensive on Mosul.

“Know that the value of staying on your land with honor is a thousand times better than the price of retreating with shame,” he said, adding: “This war is yours. Turn the dark night of the infidels into day, destroy their homes and make rivers of their blood.”

For those IS fighters who do want to flee Mosul, their escape route has been made much harder. Shi’ite militiamen with the Iraqi Popular Mobilization Units working on the west of the city said Thursday they have control of a large portion of the Aleppo-Mosul Highway that runs to the terror group’s main Syrian stronghold at Raqqa.

To escape west into Syria, IS militants will have to navigate much more difficult roads, which as the rains come will be much harder to move along to enter the Syria’s eastern provinces of Deir Ezzor and Al-Hasakah.

On Thursday, civilians could be seen leaving Mosul, heading for camps to the east of city, trudging along roads with toddlers and helping elderly family members. Many of the women wore niqabs covering their faces. Some men still wore the short trousers and long beards demanded by the jihadists, but others had quickly shaved, saying they were relieved to be able to do so. Some men relished smoking their first public cigarettes in two years.

Iraqi officials estimate that more than a million civilians remain in the city and fears are growing for their safety. The Norwegian Refugee Council aid agency has warned their lives are “in grave danger” due to the fighting. IS has tried to add to the city’s population and as its fighters withdrew from outlying villages it forced some families to accompany them as human shields.

One family of nine — toddlers among them — now at the Khazir camp for displaced people told VOA they had had to run for 20 minutes to escape IS and that the militants shot at them as they fled.

“The children lost their shoes and we had to stop and hide and then start to run again,” said Zainab.

They decided to flee because “IS were treating us very badly and shooting men who wouldn’t join them. They captured my husband as we ran and they beat him and screamed he was a very bad man for letting his family go,” she said.

Twenty-year-old Abbas said he was happy to be leaving Mosul. He said the four-day battle for control of the neighborhood had been terrifying and fierce. “Daesh fighters wouldn’t leave — they were mainly Chechens, Turks and Tunisians,” he told VOA.

As he spoke, flocks of sheep passed by. Many families refused to leave Gogjali without their prized livestock and they grouped together to herd sheep, mules and cows away and headed towards Kurdistan. Fearing mines, they avoided wasteland and the fields on the outskirts, clogging the main road into the neighborhood. Livestock and military vehicles competed for priority as they moved in opposite directions past wrecked shops, shattered masonry and over a carpet of broken glass and spent and live rounds, testimony to the ferocity of the conflict.

Civilians left Gogjali in a variety of vehicles, some with their windscreens blown out and with bullet holes peppering their sides. They used cars, tractors, trucks, SUVs, tractor-trailers and motorized tricycles, most sporting white flags. Some families had no choice but to trudge along on foot, carrying belongings and cradling babies in their arms. Others helped the hobbling elderly.

Many reporters as they left Mosul Thursday evening offered rides to families with young children or frail relatives, piling them in their pick-ups and SUVs. Many families said they hadn’t wanted to leave their homes, fearing they would be pillaged.

The head of the family, 45-year-old Tareq, said they had endured days of fighting. Their house is near Mosul’s main TV tower, the scene this week of some of the most vicious combat. “We all stayed in one room for four days. There were heavy bombardments and lots of mortar exchanges. The most terrifying were the airstrikes and one hit the house next door, killing a woman. The children screamed and cried but we didn’t dare go out. It was horrible, Thank God, we are all safe now,” he says.

On the first day of battle, in the cramped room where his extended family were crowded, his niece gave birth to a baby girl. They named her Huriyah, or Virgin.

IS fighters withdrew Wednesday, he added. He said life under IS for the past two years had been “difficult,” he said. “They killed many people, especially those who had been in the Iraqi army or were policemen or who refused to join IS,” he explained.

By Thursday, 40,000 civilians fled Mosul and its outskirts, far fewer than had been expected and much less than the 800,000 who left when IS overran the city in 2014. But hundreds left Thursday from just one small outer district, suggesting that when the fight moves deeper into the city, thousands could be heading out when they get the opportunity.