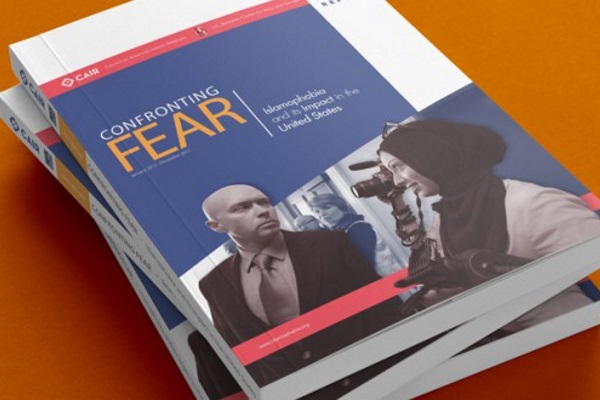 Copies of Confronting fear, a report examining Islamophobia and its impact in the U.S. Photo courtesy of CAIR

The entire report is available here.

Inciting hate toward American Muslims and Islam has become a multimillion-dollar business, according to a report released on Monday.

Released by the Council on American-Islamic Relations (Cair) and University of California Berkeley’s Center for Race and Gender, the report names 74 groups it says contribute in some way to Islamophobia in the US. Of those groups, it says, the primary purpose of 33 “is to promote prejudice against, or hatred of, Islam and Muslims”.

Corey Saylor, author of the report and director of Cair’s department to monitor and combat Islamophobia, said: “The hate that these groups are funding and inciting is having real consequences like attacks on mosques all over the country and new laws discriminating against Muslims in America.”

Saylor added that the Washington-based Center for Security Policy and Act! for America have the most impact, because they are trying to push their anti-Muslim rhetoric beyond their formerly fringe following.

Two groups on the list, the Center for Security Policy and the David Horowitz Freedom Center, have given awards of recognition to Jeff Sessions, a US senator from Alabama who chairs Trump’s national security advisory committee and is a possible vice-presidential pick.

On Monday, the headline on the David Horowitz Freedom Center website was “Muslim privilege killed 49 people in Orlando”, a reference to the mass shooting on 12 June in an Orlando LGBT nightclub by Omar Mateen, a Muslim American from Port St Lucie, Florida.

Two other Trump foreign policy advisers have ties to groups named in the Cair-UCB report. The Center for Security Policy lists Joseph Schmitz as a senior fellow; Walid Pharesreportedly served on the board of Act! for America.

The Guardian contacted Brigitte Gabriel, the founder of Act! for America, and the Center for Security Policy, which is led by Frank Gaffney, who advised Ted Cruz on national security during the Texas senator’s presidential campaign. Neither group responded immediately.

The Trump campaign and Sessions’ Senate office also did not respond to requests for comment.

Act! for America Education runs the Thin Blue Line Project, a password-protected database of information about Muslim communities in the US. According to the group’s website, the project “provides educational and informational content about issues relating to national security and terrorism and how the call to Jihad is accelerating homegrown terrorism”.
In a 2 June article, Stephen Piggott of the Southern Poverty Law Center wrote that the Thin Blue Line Project’s key component is a “Radicalization Map Locator … which lists the addresses of every Muslim Student Association (MSA) in the country as well as a number of mosques and Islamic institutions – all listed as suspected national security concerns”.

The Cair-UCB report also tracks anti-Islam bills, which it says have become law in 10 states, and 78 recorded incidents in 2015 in which mosques were targeted. Saylor said this was the highest yearly number of attacks on mosques since Cair started tracking in 2009.