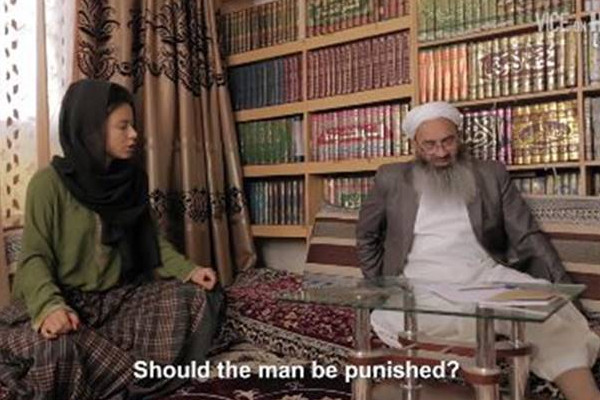 A promotional video featuring a Vice News reporter and an Afghan lawmaker was recently doing about as well as promotional videos can on social media. The story presented by Vice, really HBO, is one of an “ordinary” but defiant female protagonist, journalist Isobel Yeung, who confronts a living symbol of patriarchy, the bearded and turban-wearing Afghan MP and cleric Qazi Ahmad Hanafi, in defense of down-trodden Afghan women. That sounds like a great story to sell a documentary by playing on sympathies for abused Afghan women while stoking rank prejudices against the men their mothers bore. Emotive stuff designed to “go viral” but not much else.

The last time I recall seeing such one-dimensional “concern” for the abused section of Afghanistan’s female population from quarters of the western press was in the lead-up to President Bush’s invasion. And I suspect in this instance the concern is no more genuine.

Now many are outraged and baffled by Hanafi’s reaction to Yeung’s apparently “reasonable” questions and in the absence of a complete picture of his point of view we are left only with Yeung’s and HBO’s suggestion that it was due to his obvious prejudice against women. After all he is Afghan and does wear a turban and is from a “conservative” province. He wouldn’t even look at Ms. Yeung in the face according to some reports. So it must be that he simply can’t handle an intelligent question from a liberated woman. That must be it, right?

But I don’t think so.

Yeung’s question was, “What if a husband rapes his wife. Is that domestic abuse?” And everything after that was downhill. There are so many layers of ignorance, prejudice and stereotypes that are being played upon by Yeung and HBO here to create a “viral” effect in that 28 second video but most are beyond the scope of this post. I will confine myself to the misrepresentation of Islamic Law and it’s advocates like Qazi Hanafi that I believe the press is too often guilty of.

Firstly, it seems to me that much of the emotive power of the clip rests in the palpable tension and seemingly inexplicable disconnect between Yeung’s asking of an apparently “straightforward question”, as one YouTube commenter put it, and Hanafi’s dismissive and eventually crude, almost vulgar, response. The fact that he is a lawmaker and cleric only heightens the audience’s outrage.

I say that because rape is an illegal sexual act that is both immoral and illegal in the east and the west, both in Islamic Law and every other civilized legal system. It is a crime parallel to fornication and adultery in Islamic Law, though with no parallels in the legal systems of developed nations where it is about the only remaining illegal sexual act that can occur among adults. Other sexual acts like adultery may be immoral in the west though not illegal. The distinction between illegal and immoral is an important one that is too often lost on many Muslims who think superficially about the west, as well as upon westerners thinking superficially about Islamic Law. Where Islamic Law departs from western legal rationale on rape in marriage is with regard to the treatment of consent which returns to the terms of the marriage contract in Islamic Law.

But when Yeung asks, “What if a husband rapes his wife. Is that domestic abuse?” She ignores the legal nuances and instead asks an elected law-maker and cleric in a foreign land whether he considers a criminal act to be crime. And the act in question: non-consensual intercourse between spouses is not a crime in his jurisdiction but is being debated. So I submit that that is not a genuine question. It is, at the very least, an aspersion if not an accusation. Only criminals are asked whether they consider crime unobjectionable. He was being interrogated like an advocate of illicit sexual activity by a self-assured yet woefully uninformed pedestrian. It was a provocation even if unintentional. And I can see why he would have taken it as a direct assault on his character and dignity. In the clip it did seem that Hanafi attempted to discuss the definition of rape only to be told, as if he were a child, “I think we both know what rape is.”

Yet that is clearly not the case. While it seems Hanafi knows what rape is at least in Islamic Law, it is unclear that Yeung is aware of or even concerned with her subject’s legal positions. Were she concerned with her subject’s rationale something like, “Do you consider a husband forcing himself on his wife to be both illegal and immoral, only one of the two, or neither?”would have been a far more useful and respectful way to approach the matter. Yet it seems Ms. Yeung was engaged in activism, not journalism. And that is unfortunate as she could have reduced much tension and averted much insult and injury by simply doing some homework on rape and marriage in Islamic Law in preparation for the interview. Also there is scarcely a more effective form of activism than solid journalism. Yet the other way around doesn’t work.

What Yeung is likely unaware of, and negligently so, is that in Islamic Law the legal bedrock of marriage (that speaks to preventing and resolving disputes) is a contract that requires both parties consent to some very specific (though amendable) terms. The terms are that the husband take full financial responsibility for the upkeep and protection of the wife (with no right whatsoever to her assets whether acquired by her before or during the marriage), and that he provide her a dowry of wealth of her choosing in consideration of which she agrees to make herself sexually available to him with the understanding that they are both of sound mind and body, and capable of conceiving children. Therefore, a wife may not be compelled by a court to do housework even though in most societies, in good marriages, wives are expected to do that task and it is considered immoral, though not illegal, for her to refuse to do so. And a husband may not be compelled by a court to be gentle and skillful with his wife, whether in or out of the bedroom, even though in most societies, in good marriages, men are expected to make an effort to do so and being harsh and boorish with her is considered immoral though not illegal (unless physical harm is involved).

In cases of dispute virtually any lapse on the part of the husband regarding his financial obligations to her, be it non-payment in full of her demanded dowry or his inability (even if due to disability) to maintain her to a reasonable standard, could see her legitimately refuse him sexually and successfully have the marriage annulled in a court due to his breach of contract. On the other hand, her refusal to sleep with him without a reasonable legal excuse likewise amounts to breach of contract on her part (remember her only contractual obligation is to make herself available) which is why his forcing himself on her in such a situation, while morally objectionable, is not deemed illegal (unless he physically harms her in the process). Valid legal excuses in Islamic Law for a wife to refuse her husband’s advances would be his non-payment of dowry or other failure to honor is contractual financial obligations, illness, menstruation, or his seeking to perform an illegal sex act like sodomy. In such cases the wife may legally refuse him with force, even lethal force if necessary. And only in such circumstances would the husband’s forcing himself on her be both immoral and illegal and therefore approximating what in the west is called marital rape. So not only was Yeung’s question not straightforward but it was also uninformed and unhelpful.

In my opinion general ignorance including, and perhaps especially, regarding Islamic Law among Muslims, male and female, which is tied to poverty and illiteracy is the biggest barrier to Muslim men and women attaining their God-given mutual rights and protections vis-à-vis their governments or each other. And ignorance and/or insensitivity to Islamic Law and social custom on the part of well-intentioned outsiders is the biggest barrier to the execution of successful programs of positive social change by agencies like the UN. It seems clear to me from the details and intent of Islamic Law that effective solutions to problems of violence against women exist within an Islamic legal framework but they require that issues of mistrust and misunderstanding be addressed in earnest.

Thus promoting knowledge and understanding, and the lowering of social and cultural barriers are of paramount importance on such critical matters as the abuse of women. I would therefore deem a journalist who lacks a basic understanding of the Islamic marriage contract, or one who isn’t even aware that classical Islamic Law deems a man’s looking at a woman’s face to be inappropriate, as unfit to handle the types of issues HBO and Yeung are trying to tackle in this documentary. When outlets like HBO take the easy route on such sensitive and complex matters contenting themselves with poor research and journalism they invariably end up producing material that lacks the depth and force to contribute positively to efforts like those by actors such as the UN that seek to actually come up with effective legislation and other social mechanisms to deal with the real crises on the ground in places like Afghanistan.

By taking the easy route and playing to the gallery of base prejudices and stereotypes that make for emotive drama, media outlets end up sacrificing their journalistic integrity and ethics at the altar of cheap exhibitionist activism that flies off the shelves yet only to add fuel to the fires of mistrust and misunderstanding everywhere. Now that may be great for HBO’s bottom line. It may even be great for journalists so privileged that they feel that a slight to their dignity merits the removal of elected officials in other people’s nations.

But such endeavors do nothing positive for abused women in Afghanistan or anywhere else.