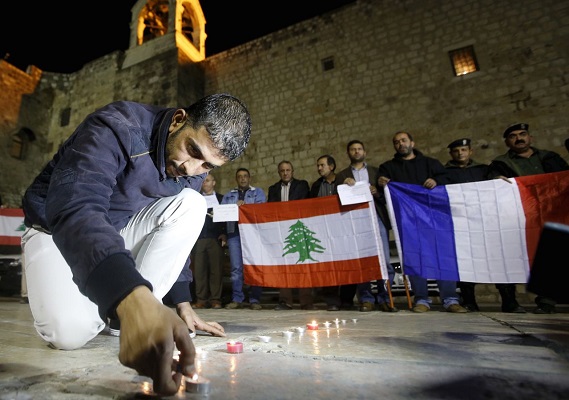 I’m just back from Paris – exhausted and not a little upset by what I saw and heard.

One of the few good things to come out of these bleak few days is the sudden interest in atrocities committed in the Middle East and Africa. Some have criticised us – the media – for unequal coverage of two terrorist bombings, one in Beirut last Thursday and the other in Paris on Friday.

I’m hoping they’re not the kind of person who jumps on a hashtag bandwagon and then goes back to watching videos of skateboarding dogs, but will start a movement demanding more in-depth international news.

I wasn’t in Beirut during last week’s bombing, but I was for one in November 2013 in which 23 people were killed – here’s my report, in case you missed it at the time.

I see that 80 people recommended my blog and video story while 29 retweeted it. Compare that to the response my colleague, Krishnan Guru-Murthy, got when he challenged the movie director, Quentin Tarantino, on the use of violence in his films: 3.52 million views on Youtube and rising.

It’s not that we don’t cover bomb attacks in Beirut and elsewhere, but sometimes the viewer shows less interest. Many are more interested in show business, celebrity and news closer to home.

I have spent my whole career reporting atrocities in Africa, the Middle East and Asia. That’s what I do. Some people watch and care. But many people, if I’m honest, switch off.

At Channel 4 News we continue to report the war in Syria (I was just there – did you watch my reports?), the resulting refugee crisis (ditto) and events like the Al Shabaab attack in Garissa, in northern Kenya in April.

But sometimes I feel we’re howling in the dark because so few of you respond. That attack in Kenya, the most viewed story on the BBC website on Sunday, garnered considerably more interest last weekend than it did at the time.

I don’t think that the lives lost in Paris are more valuable than those lost in Beirut. I do think that the atrocities have different meanings, because it is relatively easy for Islamic State to bomb Lebanon whereas a huge attack in a European capital shows them to be a far more dangerous organisation than previously recognised.

So, yes, Paris was a bigger story in news terms, apart from the higher death toll. And, yes, the viewing figures went up, because this was a story people could relate to – more Britons visit Paris than Beirut.

There are also practical issues – South Beirut, where last Thursday’s bombing occurred, is controlled by Hizbollah, who rarely let journalists film and never freely. There’s no way the hundreds of journalists who descended on Paris would have been permitted to flood a Hizbollah area for days on end. But that’s just a logistical issue, not your problem.

If you don’t watch the extensive foreign reporting we provide, it must be partly our fault. We have to look for new ways to tell the story – did you see our recent interactive online package that asked viewers to make the choices refugees have to make?

Several of my colleagues – Marie Colvin of the Sunday Times, and the US reporter James Foley who was murdered by IS – lost their lives doing this work. If they had survived, they would have been in Paris too reporting this awful mass crime in a European capital, in which, incidentally, many non-white people were killed.

But they’re not because they died reporting in very dangerous circumstances stories that I fear those tweeting, #Beirut2Paris, didn’t bother to read or watch.