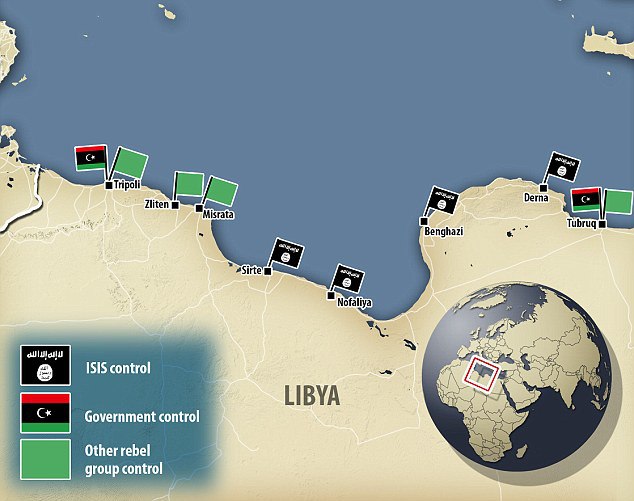 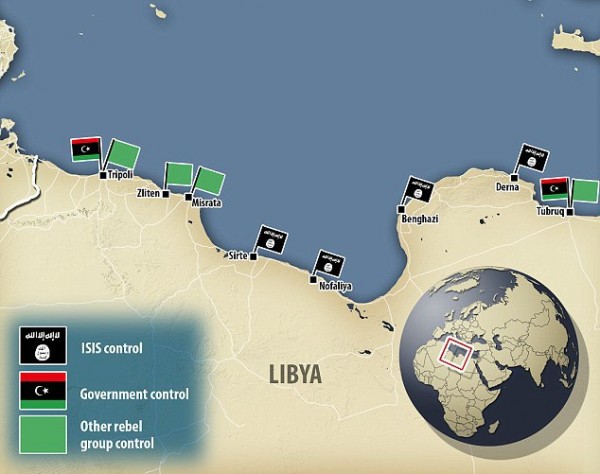 As ISIS is using the chaos in Libya to set up local bases and hit the country’s crucial oil revenue since the takeover of Sirte, it is yet unclear whether that may help the group to extend its foothold.

The UN Security Council adopted two separate resolutions on Libya last Friday, the first demanding an “immediate” ceasefire and extending the UN Support Mission in Libya (UNSMIL) until 15 September, and the second easing the arms embargo on the country in light of the terrorist threat there.

While UN-facilitated negotiations between the country’s rival factions are continuing, the political impasse is far from being resolved. Two governments -one internationally recognized in Tobruk in the east, the other set up in Tripoli in the west- are fighting for control four years after a civil war ousted longtime dictator Gaddafi. Neither of the governments has been able to stabilize the situation in the country. Based on a BBC investigation, there could be up to 1,700 different armed groups in Libya competing for power.

The security vacuum is noticeably exploited by ISIS fighters and local militias that have pledged allegiance to ISIS, which has made significant gains in Libya in the past months. Its presence in the North African country has expanded from Derna since October 2014, when the group officially announced the expansion of its caliphate to Libya. In February 2015, Sirte, the hometown of Col. Muammar Gaddafi, became the third city to fall into hands of ISIS.

According to Dr Khaled Hanafy Aly, researcher in African affairs at the Al-Ahram Foundation, the emergence of ISIS in Libya should not be disconnected from two aspects. First, ISIS’s expansion fits with the transition pattern of jihadist militants operating in Libya from local to regional. Ansar al-Sharia, Libya’s largest armed jihadist group, with thousands of fighters including foreign fighters from Tunisia, Algeria, and other African countries, is a clear example of this pattern. Second, ISIS has extended its influence through tribal support, including from ex-regime loyalists belonging to al-Qaddafa (Gaddafi’s tribe) with young men struggling amid displacement and social exclusion who likely will back the group or fall in its ranks.

“The Islamic State has become a ‘banner’ for those Libyan tribesmen to express local grievances, tribal and religious, and change the political equation in their favor after the 2011 revolution,” said Dr Aly.

ISIS has succeeded in ideologically attracting groups previously aligned with Ansar al-Sharia and al-Qaeda to swear allegiance to it, provided they pledge loyalty and accept the group’s doctrine.

In Sirte, as evidence suggests, remnants of the former Libyan regime have supported ISIS or fallen into its ranks to get protection and avoid being persecuted or arrested for their loyalty to Gaddafi.

Sirte, a major Libyan port city west of Benghazi on the Mediterranean coast, seems so far ISIS’s outpost of most serious concern as it is a key area full of resources to earn revenue for the organization.

According to the Arab Oil & Gas Directory (AOGD) 2013, about 80 percent of Libya’s recoverable reserves are located in the Sirte basin, which also accounts for most of the country’s oil output. Libya has the 9th largest proven oil reserves in the world and the largest reserves in Africa.

With the takeover of Sirte, ISIS gets access to the area’s oil reserves. The group has targeted Libya’s only source of income by launching a series of attacks on nearby oil sites in recent weeks, thus depriving its rivals of the resources needed to face ISIS-allied fighters.

In last month’s assault on the al-Ghani oilfield, south-east of Tripoli, ISIS militants reportedly killed at least 8 Libyan guards; several of them were beheaded, and abducted nine foreign oil workers. Earlier in March, the deadly attacks on Libya’s oil infrastructure by ISIS forced the national oil company to close operations at 11 oilfields in its central region.

The area of Sirte is also where ISIS militants beheaded 21 captured Egyptian Christians whose execution they announced in a video posted last February.

As a result of the deteriorating security, ISIS’s entrenchment in the Sirte area may pose a real security threat for foreign investors at a time when oil is cheaper and Libya’s oil industry is almost entirely inoperative.

For Gen. Nabil Fouad, a former officer in the Egyptian army, each warring party in Libya is intent on fighting the other to control key cities and the country’s oil riches. In his view, although some foreign investments may be at risk, if any company feared any direct threat they would close oil facilities in the targeted areas however they would not pull out of Libya altogether.

Gen. Fouad added that, if the Sirte takeover by ISIS was perceived as a major problem for foreign interests, Europe should step in to both stop oil exports from this area and block smuggling of fighters and weapons to ISIS.

“European countries should agree to impose a siege on the Libyan coast to deny ISIS control over oil sales as well as trade and criminal networks,” he argued.

Aly suggests that whichever party, including ISIS, gained control of the oil sites in central Libya could change the power balance between the two opposing governments and their related militias.

No Libyan authority has been able to take any effective action against ISIS, nor has any militia been able to remove the organization from its local bases.

ISIS is still holding an appeal despite the recent battlefield setbacks in Iraq and Syria.

The researcher thinks ISIS may increase its foothold in Libya, taking advantage of the country’s growing disunity, especially in the absence of international pressure. He doesn’t see the emergence of ISIS in Libya different from that in Syria and Iraq.

Fouad has a different opinion as, he pointed out, what is happening in Syria and Iraq is unrelated to the situation in Libya. Expressing optimism that the Libyan army is seeking to regain ground, and receiving support from external parties, he said that there is constant high-level coordination between Egypt and Libya in fields like intelligence, military, security and logistics. In addition, Egypt recently agreed to give the Libyan army training and technical assistance in Egypt.

“Libya is a transit point for ISIS, a sort of backup plan in case the organization suffers territorial losses in Iraq and Syria, affiliated militants can reassemble in Libya and move on to other countries,” the strategic analyst maintained.

“I don’t think ISIS is a ‘winner’ in Libya nor it will get any further in the country,” he added, “the best they can do is to keep the areas they are controlling.”

The UN warned a few days ago that the number of people now under arms, estimated at 100,000 to 300,000, was ten times more than the 30,000 or so Libyans who took part in the revolution that overthrew Gaddafi in 2011. The UN also said that Libya’s factions may include between 1,000 and 5,000 fighting for the ISIS militant group.

Gen. Fouad clarified that, more than people taking arms, what has increased is the number of recruits in armed militias and fighters.

The Arab Spring, welcomed by Western states, has turned out to be a total disaster for the wider region. Given the fluid situation in Libya, it’s hard to predict how things will evolve.

Dr Aly expects Libya’s future will still look unstable, with power split among several actors, and no minimum political consensus. For him, neither international players nor internal forces will sort out Libya’s mess.

“The solution is to build a socio-political agreement among the different tribes, which are at the core of Libya’s social infrastructure, to get involved those particular ones that hold the keys to solve the crisis,”the research proposed.

Ex-army officer Fouad is convinced that things will stay the same, or possibly get worse, until there’s an international decision to arm the Libyan army, or the Arab coalition takes action on Libya with the countries giving political support and others helping militarily. The analyst insisted that European countries should reach a joint effort to cut all arms supplies and funding to ISIS.

Prior to last Friday’s UNSC vote, Libya, backed by Egypt, had asked for an end to the arms embargo to allow the government to build up its army and take on groups such as Islamic State. Its demand was however dropped. Instead, the resolution adopted now calls on a Security Council committee to “consider expeditiously” requests for arms purchases from the Libyan government.

The refusal to allow the arms purchases came after a UN panel of experts warned that the arms shipments could fall into the wrong hands in a country awash in weapons, and known as a major arms trafficking hub for North Africa.

As chances that the two rival sides agree on forming a national government appear remote right now, the Libyan turmoil is providing fertile ground for ISIS. Facing growing pressure from US-led airstrikes on its strongholds in Iraq and Syria, ISIS is holding on to its Libyan foothold.

More than a new frontier to expand ISIS’s caliphate, Libya may just remain an appealing gateway to Europe as well as to three other North African countries—Algeria, Morocco and Tunisia.

Jihadists claim that Libya is the key to spreading takfiri-jihadism throughout the Maghreb and Sahel regions. The impact of a prolonged encroachment of ISIS in Libya would be inevitably felt across several countries in North Africa.