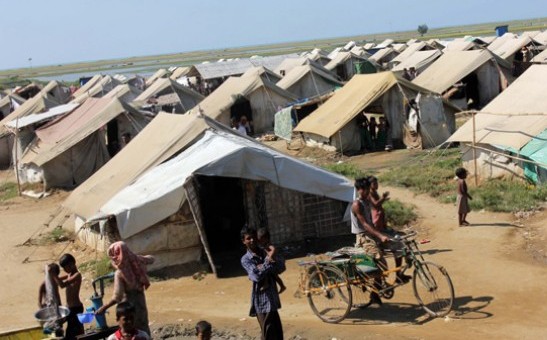 In a formal press conference on Thursday the authority admitted that the victims were killed during a disturbance in Parain village of Mrauk U township, an ancient city of the State.

U Hla Thein, president of Rakhine State Documentation & Information sub-Committee addressed the  media, but he avoided giving details about the cause of the death of three women namely Daw Kha Tayzar (aged 40, daughter of U Shaw Bi Alam), Daw Nu Mad (aged 50, daughter of U Ali Armud) and Daw Ali Niser (aged 25, daughter of U Ilsu).

The affray took place at around 1 pm on the day when a mob from the Parain village tried to prevent a group of people who came to the village to construct homes, Hla Thein elaborated.

Meanwhile, the riot police and Army personnel tried to intervene but the mob did not bow down and tried to attack the security forces. Finally the security personnel used 40 mm rubber bombs and 12 volts bullets to disperse the mob.

After the incident, a group of officials led by district chairman along with security personnel entered into the village and found the dead bodies of three women, belonged to the Muslim community.

“The authority is investigating the incident to understand the reason for the death of three women, whether they died because of shooting by security forces or the clashes between the two groups,” informed Hla Thein.

He also added that the investigating agency has found several injury marks on their bodies and would come to the conclusion about the cause of death.

A good number of reporters attended the press conference, which began on 9:30 am and concluded at 12: 30 pm.