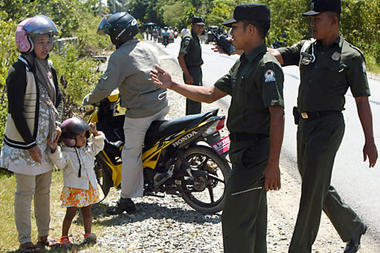 In the Aceh town of Lhokseumawe, the moral crusade continues.

Religious leaders have expressed support for the new regulation, but women’s groups say it is ridiculous and unfair. They say local laws enacted in the name of religion and morality have disproportionately affected women.

Andi Yetriyani from the national body on women’s rights says the bylaw is a big step backwards for Aceh, and for Indonesia.

“Basically this is a discriminatory regulation against women,” Yetriyani stated. “It is also undermining the whole movement for advancing human rights in Indonesia.”

So why aren’t Achenese women taking to the streets?

Yetriyani says it’s not so easy.

“These bylaws you know are framed under the sharia, so many of the Indonesian people do not dare to challenge it because you [they] will be condemned as against Islam,” Yetriyani said.

Women’s groups in Aceh say the local ordinance is a waste of money – as more moral police will be recruited to enforce it.

They argue that regional funds would be better spent on improving health and education.

Aceh was granted regional autonomy when a peace deal between the central government and Achenese separatists was brokered in Helsinki in 2005.

Since the agreement, and the subsequent introduction of sharia law, reports of human rights violations have steadily increased.

Andreas Harsono from Human Rights Watch says that a number of local laws in Aceh violate freedom of expression, association and religion.

“These violations not only violate international human rights law but also violate the Helsinki agreement between Indonesia and the Free Aceh Movement in which both sides agreed they are to protect and promote human rights,” he said.

The Indonesian Home Affairs Ministry says it will review and potentially repeal the motorbike bylaw.

The ministry has blocked more than 2,000 local laws across the country, but it has never revoked a sharia bylaw in Aceh.

But in Aceh, freedom of expression and association continue to be restricted on the grounds of Islamic morality. And minority religious groups are also under pressure.  Almost 30 churches were shut down in the province last year.

Harsono says that Islam in Indonesia is starting to bear some uncomfortable parallels with Pakistan – and that moderate voices are being drowned out.

“The thing is, more radical fundamentalist Muslim speakers are more outspoken. The battle is still going on. We still do not know what will be coming out of it. Although, we are nervous to see statistically the number of discriminatory bylaws are increasing,” Harsono noted. “So I’m afraid it is going to be a long dark era. When will it end? When will it be enough is enough?”

In a country where the majority of the population holds moderate Islamic views, Aceh is the only Indonesian province governed by sharia law.

Aceh residents have been informed the new bylaw is expected to be implemented in the coming months.