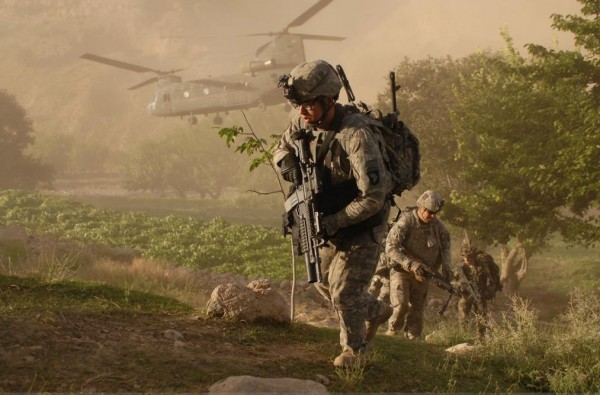 Among multiple layers of deception and newspeak, the official Washington spin on the strategic quagmire in Afghanistan simply does not hold.

No more than “50-75 ‘al-Qaeda types’ in Afghanistan”, according to the CIA, have been responsible for draining the US government by no less than US $10 billion a month, or $120 billion a year.

At the same time, outgoing US Defense Secretary Robert Gates has been adamant that withdrawing troops from Afghanistan is “premature”. The Pentagon wants the White House to “hold off on ending the Afghanistan troop surge until the fall of 2012.”

That of course shadows the fact that even if there were a full draw down, the final result would be the same number of US troops before the Obama administration-ordered AfPak surge.

A recent, detailed study by the Eisenhower Research Project at Brown University revealed that the war on terror has cost the US economy, so far, from $3.7 trillion (the most conservative estimate) to $4.4 trillion (the moderate estimate). Then there are interest payments on these costs – another $1 trillion.

That makes the total cost of the war on terror to be, at least, a staggering $5.4 trillion. And that does not include, as the report mentions, “additional macroeconomic consequences of war spending”, or a promised (and undelivered) $5.3 billion reconstruction aid for Afghanistan.

Who’s profiting from this bonanza? That’s easy – US military contractors and a global banking/financial elite.

The notion that the US government would spend $10 billion a month just to chase a few “al-Qaeda types” in the Hindu Kush is nonsense.

The Pentagon itself has dismissed the notion – insisting that just capturing and killing Osama bin Laden does not change the equation; the Taliban are still a threat.

In numerous occasions Taliban leader Mullah Omar himself has characterised his struggle as a “nationalist movement”. Apart from the historical record showing that Washington always fears and fights nationalist movements, Omar’s comment also shows that the Taliban strategy has nothing to do with al-Qaeda’s aim of establishing a Caliphate via global jihad.

So al-Qaeda is not the major enemy – not anymore, nor has it been for quite some time now. This is a war between a superpower and a fierce, nationalist, predominantly Pashtun movement – of which the Taliban are a major strand; regardless of their medieval ways, they are fighting a foreign occupation and doing what they can to undermine a puppet regime (Hamid Karzai’s).

Look at my bankruptcy model

In the famous November 1, 2004 video that played a crucial part in assuring the reelection of George W. Bush, Osama bin Laden – or a clone of Osama bin Laden – once again expanded on how the “mujahedeen bled Russia for 10 years until it went bankrupt and was forced to withdraw in defeat.”

That’s the exact same strategy al-Qaeda has deployed against the US; according to Bin Laden at the time, “all that we have to do is to send two mujahedeen to the farthest point East to raise a piece of cloth on which is written al-Qaeda in order to make the generals race there to cause America to suffer human, economic, and political losses without their achieving for it anything of note, other than some benefits to their private companies.”

The record since 9/11 shows that’s exactly what’s happening. The war on terror has totally depleted the US treasury – to the point that the White House and Congress are now immersed in a titanic battle over a $4 trillion debt ceiling.

What is never mentioned is that these trillions of dollars were ruthlessly subtracted from the wellbeing of average Americans – smashing the carefully constructed myth of the American dream.

So what’s the endgame for these trillions of dollars?

The Pentagon’s Full Spectrum Dominance doctrine implies a global network of military bases – with particular importance to those surrounding, bordering and keeping in check key competitors Russia and China.

This superpower projection – of which Afghanistan was, and remains, a key node, in the intersection of South and Central Asia – led, and may still lead, to other wars in Iraq, Iran and Syria.

The network of US military bases in the Pentagon-coined “arc of instability” that stretches from the Mediterranean to the Persian Gulf and South/Central Asia is a key reason for remaining in Afghanistan forever.

But it’s not the only reason.

It all comes back, once again, to Pipelineistan – and one of its outstanding chimeras; the Turkmenistan/Afghanistan/Pakistan (TAP) gas pipeline, also known once as the Trans-Afghan Pipeline, which might one day become TAPI if India decides to be on board.

The US corporate media simply refuses to cover what is one of the most important stories of the early 21st century.

Washington has badly wanted TAP since the mid-1990s, when the Clinton administration was negotiating with the Taliban; the talks broke down because of transit fees, even before 9/11, when the Bush administration decided to change the rhetoric from “a carpet of gold” to “a carpet of bombs”.

TAP is a classic Pipelineistan gambit; the US supporting the flow of gas from Central Asia to global markets, bypassing both Iran and Russia. If it ever gets built, it will cost over $10 billion.

It needs a totally pacified Afghanistan – still another chimera – and a Pakistani government totally implicated in Afghanistan’s security, still a no-no as long as Islamabad’s policy is to have Afghanistan as its “strategic depth”, a vassal state, in a long-term confrontation mindset against India.

It’s no surprise the Pentagon and the Pakistani Army enjoy such a close working relationship. Both Washington and Islamabad regard Pashtun nationalism as an existential threat.

The 2,500-kilometer-long, porous, disputed border with Afghanistan is at the core of Pakistan’s interference in its neighbour’s affairs.

Washington is getting desperate because it knows the Pakistani military will always support the Taliban as much as they support hardcore Islamist groups fighting India. Washington also knows Pakistan’s Afghan policy implies containing India’s influence in Afghanistan at all costs.

Just ask General Ashfaq Parvez Kayani, Pakistan’s army chief – and a Pentagon darling to boot; he always says his army is India-centric, and, therefore, entitled to “strategic depth” in Afghanistan.

It’s mind-boggling that 10 years and $5.4 trillion dollars later, the situation is exactly the same. Washington still badly wants “its” pipeline – which will in fact be a winning game mostly for commodity traders, global finance majors and Western energy giants.

From the standpoint of these elites, the ideal endgame scenario is global Robocop NATO – helped by hundreds of thousands of mercenaries – “protecting” TAP (or TAPI) while taking a 24/7 peek on what’s going on in neighbours Russia and China.

Sharp wits in India have described Washington’s tortuous moves in Afghanistan as “surge, bribe and run”. It’s rather “surge, bribe and stay”. This whole saga might have been accomplished without a superpower bankrupting itself, and without immense, atrocious, sustained loss of life, but hey – nobody’s perfect.