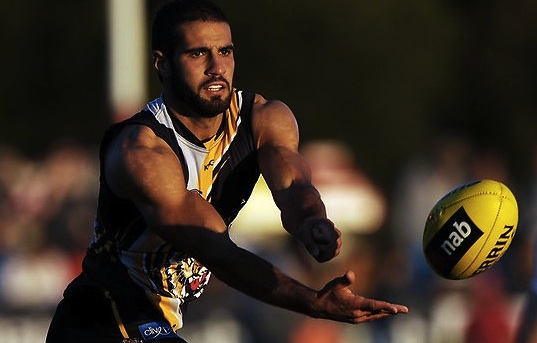 He was recruited as the sort of player a coach dreams of.

Bachar Houli is a devout Muslim and does not drink, gamble or smoke.

The Richmond midfielder thrives on the social responsibilities and role-model status that come with being a Muslim in professional sport.

“I’m grateful for the position I’ve been put in. I’ve got a role to play and that is to educate others about the way I live and the belief system I follow,” Houli said yesterday in the lead-up to the weekend’s multicultural round.

“It’s all about being proud of who you are and talking about it because a lot of people don’t understand and it’s about educating them that I’ve got a couple of different ways I go about life.”

Houli’s journey has been one of constant juggling between football and the faith he follows.

It started as an 11-year-old when he would sneak out of the family home to play the game he loved.

“Initially, I found it awkward and I was kind of scared because my parents weren’t aware that I was going to play and they were really against it,” he said.

“It was the old trick of putting the teddy bear underneath the blanket. I got away with it a few times, but it didn’t last too long.

“Luckily my brother backed me up and said, ‘You’ve got to let the kid play and enjoy what he’s doing’.”

Houli prays five times a day, including on match day when he will go into a little room under the stadium for five minutes before and after the game.

“All I need is a little space to do my thing. I perform one prayer before the game and if it clashes with another one I perform that prayer after the game,” he said.

“With our religion it’s all about cleanliness and being clean so coming in at halftime you’re going to be quite sweaty and not smelling all that good. When we pray it’s as if we’re facing God, so we have to present ourselves in the best form.”

Houli praised the Tigers and his former club Essendon for their understanding. He said: “They’ve both been very, very supportive. They have offered me a number of rooms to perform my prayers.”

Ramadan presents arguably the biggest challenge to Houli. August is the Islamic month of fasting, in which Muslims refrain from eating and drinking during daylight.

“I just had a meeting with a fitness coach to discuss what’s best in terms of training,” he said. “They’re very supportive in terms of limiting my program to a shorter day and lesser loads and stuff like that.”