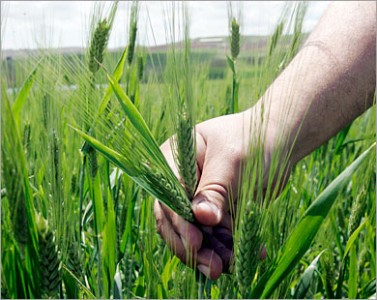 A Muslim learned to work on earth for God, even if his fellow humans are dying or even if the earth is destroyed, he has to keep working.

One of the most significant aspects of Islam is that it is a religion that is concerned with both this life as well as the hereafter.

Islam urges Muslims to work hard to establish civilization and at the same time to work hard to earn their places in Paradise. This unique balance between life and afterlife can never be found in any man-made law.

Land restoration comes as a fundamental issue in Islam. Furthermore, it is crucial for the existence of mankind on Earth. God says:

{He created you out of the earth and assigned you on its construction} (Hud 11: 61)

Revival of the dead land is a very important part of land restoration. The term “dead land” is used to refer to the deserted land that is not used for any useful purpose. There can be several reasons for abandoning these lands such as the absence of water resources, being submerged under water, or its poor soil type. Additionally, it could be a natural desert or a land that was one time being used and later on it was abandoned and turned into a desert. This phenomenon is known as desertification.

Revival of the Dead Land

Islamic and Arab communities are not far from this problem. Many Muslim countries are at the top of the list of those who suffer from wildness desertification, headed by Sudan, Somalia, Mauritania, Niger and others. Desertification even faces some countries that have adequate quantities of water like Egypt. It is surprising to know that Egypt loses around 1,000 sq meters of agricultural land every hour due to desertification. When we observe these numbers and their significance, we realize the magnitude of this gigantic problem that Islam begun confronting 14 centuries ago. Hence, we can appreciate the greatness of Islam that God provided with solutions for the entire world’s problem, including desertification.

Islam Encourages the Restoration of Land

Any Muslim who places a plant or cultivates land where birds, animals or humans eat from, would be rewarded by Allah Almighty

Islam adapts two main ways to motivate Muslims to revive the barren lands. Firstly, as Islam always does, it reminds people of their reward in the everlasting hereafter. This methodology can only be found in Islam. It urges people to work and gives them glad tidings of their endless reward in the afterlife.

In his book of Hadith of Prophet Muhammad (peace be upon him), Al-Bukhari narrated that Anas Ibn Malik, a companion of the Prophet, said that he heard the Prophet saying:

“Any Muslim who places a plant or cultivates land where birds, animals or humans eat from, would be rewarded by Allah Almighty”.

It is also narrated that the Prophet said:

“Whoever revives barren land will be rewarded, and all what birds or animals eat from his work is considered to be his charity”.

It is also narrated by Gabir that the Prophet said:

“Whenever a Muslim places a plant, he will be rewarded. There is reward for whatever is consumed from this plant by birds or animals. This reward will be continuous until the day of judgment” (An-Nasa’i & Ibn Hibban)

Secondly, to urge people to revive the deserted land, Islam gave those who revive these lands the right to own them as long as they are not owned by another person. It is reported by Said ibn Zaid that the Prophet said:

“Whoever revives a barren land, it is his” … (At-Tirmidhi & Abu Dawoud)

Arwa, a companion of the Prophet, said: “Allah is the owner of all lands and He is the owner of mankind. Whoever revives a barren land, he deserves the right to its ownership”. (Muslim)

Reviving the barren land was recommended by the Prophet and all his righteous companions. It is a fundamental aspect of Islam that the companions understood and practiced.

Imam Ahmed narrated that Abu Al-Dardaa was one day planting a plant in Damascus when a man asked him “Why are you planting this plant? You are an old man and this plant will not give fruit except after years” Abu Al-Dardaa replied saying: “I will be rewarded for others who will benefit from it”

The Prophet did not give you this land to keep away, but to work, so take what you can revive and return back the rest

The righteous Caliph Umar ibn Al-Khatab, used to help people in planting. He said once to Khozaima ibn Thabit “Why are not planting your land?” Khozaima replied “I am an old man and I may die tomorrow”. Umar said “I urge you to plant it”, then he got up and they both planted it together.

It was policy of the Prophet and the righteous Muslim Caliphs to give part of the barren lands to those who provided services to the Islamic state. This was a reward from one side and from another it was used to encourage the restoration of barren lands. Conversely, some people were deprived their lands if they did not put effort in to its restoration. Abou Ubaidah reported that Al Harith ibn Bilal Al-Mazni said that the Prophet gave him a piece of land, and later on when Umar became the Caliph, he told Bilal: “The Prophet did not give you this land to keep away, but to work, so take what you can revive and return back the rest”.

According to Al-Shafi’ and Ibn Hanbal, permission is not required at all times.  It is acceptable for each country to adapt the juristic opinion that is most appropriate for its circumstances. Umar ibn Al-Khattab permitted people to own the land on condition of its cultivation. People were given three years to prove their eligibility (to prove that they are really able to cultivate the land). If they failed to cultivate their land within these three years, the land would be taken away from them and assigned to another person and so on and so forth.

Cultivate the Land… Even on Judgment Day

“If you have a plant in your hand and you can see the judgment day approaching, even then, without any further delay, you should sow/put the plant in the earth”

Islam pictures Muslims as the best people evolved for mankind. A good Muslim understands that he has to work on the restoration and cultivation of earth. He should not bother with the obstacles that may face him as he seeks his reward from God. These great values are clear in the words of Prophet Muhammad when he said:

“If you have a plant in your hand and you can see the judgment day approaching, even then, without any further delay, you should sow/put the plant in the earth” (Al-Albani)

A Muslim learned to work on earth for God, even if his fellow humans are dying or even if the earth is destroyed, he has to keep working. His work will not go in vain, God will receive his work no matter what the time or place is.

The wisdom behind planting the earth does not stop at just providing a source for food, air filtration from carbon dioxide, or to stop erosion. It has another important reason which is to make earth look beautiful, God says in Quran: {Or, who has created the heavens and the earth, and who sends you down rain from the sky? Yea, with it we cause to grow well-planted orchards full of beauty of delight: it is not in your power to cause the growth of the trees in them. (Can there be another) god besides Allah? Nay, they are a people who swerve from justice} (An-Naml 27: 60)

The aesthetics and beauty of nature is a confirmation of the Islamic principle that God has bestowed on all His creation. This is the beauty principle! It is narrated by Ibn Mas’ud that the Prophet Muhammad said:

“Verily, Allah is beautiful, and He loves beauty” (Muslim)

Even when the Quran presents trees and fruits as a kind of food for the humans and animals we can see the beauty of the description: {Then let man look at his food, (and how We provide it): For that We pour forth water in abundance, And We split the earth in fragments, And produce therein corn, And Grapes and nutritious plants, And Olives and Dates, And enclosed Gardens, dense with lofty trees, And fruits and fodder,- For use and convenience to you and your cattle.} (Abasa 80: 24-32)

Creating gardens in the Islamic world foreshadows the wish to enter paradise.

Creating gardens in the Islamic world foreshadows the wish to enter paradise. For the Muslims to be able to create such beautiful gardens was very difficult due to their unsuitable weather (especially in the Gulf Area). They also started to enhance their gardens trying to imitate the peaceful vivid description in the Quran. One of the verses from Quran that the Muslims adopted its idea was by planting gardens over high lands in order to protect the roots of the plants from the ground water as suggested here: {And the likeness of those who spend their substance, seeking to please Allah and to strengthen their souls, is as a garden, high and fertile: heavy rain falls on it but makes it yield a double increase of harvest, and if it receives not Heavy rain, light moisture sufficed it. Allah seethes well whatever ye do} (Al-Baqarah 2:265)

There are many verses in Quran that describe the beauty of Paradise and the kinds of pleasure that God prepared for His righteous worshippers. God says: {Verily for the Righteous there will be a fulfillment of (the heart’s) desires; Gardens enclosed, and grapevines} (An-Naba’ 78: 31-2)

Ibn Abbas defined these “gardens” as the trees and palms in paradise. Al-Saady explained that these “gardens” consist of several kinds of trees, fruits, and rivers. God also says: {And those on the right hand; what of those on the right hand? Among thornless Lote-trees, and clustered plantains, and spreading shade, and water gushing, and fruit in plenty. Neither out of reach nor yet forbidden} (Al Waqi’ah 56 27-33).

This verse describes two types of trees; lotes and plantains. The verse even gives more description of these trees. The lote trees are described to be free of thorns. It is narrated that a Bedouin asked the Prophet: “O Prophet of Allah, how come that there is a tree in Paradise that is harmful?” The Prophet replied “Which tree are you talking about?” the Bedouin said “The Lote-tree; it has harmful thorns”. The Prophet replied “Allah said that these are thornless Lote-tress. Allah has removed all the thorns and replaced them with fruits. These fruits have seventy two types of delicious taste”

The other type of fruits that was mentioned in the verse is the clustered plantains. These are the fruitful banana trees. They have similar fruits as those that we know; however, they are much more delicious. Furthermore, God described that these trees have spreading shades which gives an aesthetic view to the trees. Abu Huraira reported that the Prophet said:

“There is a tree in Paradise that a person can walk in its shade for a hundred years without reaching its end” (Al-Bukhari).

There are several verses in Quran that describes similar tree such as “an extended shade”, and “the shade thereof is close upon them and the clustered fruits thereof bow down”. These verses point out the material benefits of trees as well as their aesthetically pleasing view. The Prophet Muhammad said: “All the trees in paradise have golden stems”.