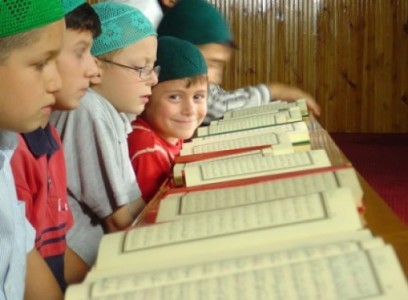 “I’m blessed with this kid,” said Syed, Shayan’s father, who moved to the US from Pakistan when he was 12.

“At his age, I didn’t know anything.

Shahzad, from Richmond, was one of the few parents who preferred to send their kids to Madrasah Islamia, or Islamic school, to memorize the Holy Qur’an; Muslims’ holy book.

Enrolling his son Shayan, a straight-A student, at the madrasa two years ago, the father was pround of his brilliant son who has managed to memorize more than half of the Qur’an, a best way for Syed to keep Qur’an from loss.

“This is something nobody can take away from you,” said Shahzad.

“Even if the Quran gets lost, you still have it in your heart.”

At their school, the largest and oldest in Houston, students are also taught about prophets such as Moses, Jesus and Muhammad as well as respecting their classmates and help others.

“Our children should have some sort of knowledge of Islam, of who they are, where their roots come from,” said Shahzad.

“It’s important for every kid, whatever religion, whatever culture.”

Hamzah Ghia, the 19-year-old imam of the Hamza mosque at Mission Bend, was another graduate of the school.

Ghia is the youngest imam to deliver the Friday sermon at this mosque.

When he was 7, his father enrolled him at the Madrasah Islamia to complete memorizing Qur’an at the age of 10.

Along with Qur’an and Islamic studies, Ghia also had to keep up with home schooling for subjects such as English, math and science.

“But never were we taught about war or anything like that,” Ghia said.

Madrasas, meaning school in Arabic, have long existed in the Middle East and Asia with equivalent meaning to Sunday schools. In some countries, including the US, they refer to faith-based private schools focused on Qur’an.

However, in post 9/11 America, madrasas were wrongly equated to a training ground for young terrorist

“I think this is propaganda against the madrasas,” Imtiaz urRehman Thanvi, a teacher at Houston’s Madrasah Islamia, told the Chronicle.

The public stigmatization of the word started when public figures, such as Colin Powell and Donald Rumsfeld, used “madrasa” as a label for anti-American terrorist training camps.

The New York Times printed a correction of the misuse of the word in 2007, saying, “While some teach a radical version of Islam, most historically have not.”

Thanvi lived most of his life in Pakistan, where he was the director of Islamic Studies at Aitchison College in Pakistan.

“I have lived in Pakistan, and I haven’t found these types of radical schools there,” he said.

“In madrasas, we simply teach the memorization of the Quran and the basic teachings of Islam.”

Ghia, the young imam, also rejects such accusations, noting that those students who study the holy Qur’an would know better than to commit suicide or kill innocent people, two crimes directly forbidden in the Quran.

Memorization of the holy book was not only a Muslim tradition in religious schools, Rev. Guinn Blackwell-Eagleson, a University of Houston religious studies professor said.

“Studying torah is one of the highest values in Judaism,” Rev. Blackwell-Eagleson said.

“And in some Bible colleges, it’s very common for students to memorize as much as possible of the Christian scripture.”

Though many American’s would regard the life of Syed’s son as different, the father insists that it is still an American life.

“Every American has a different life. You have poor, you have rich. Then you have people who go to church, to synagogues, to mosques – they’re more religious,” Syed said.

“Lifestyle is who you are. A Muslim life is an American life, too.”