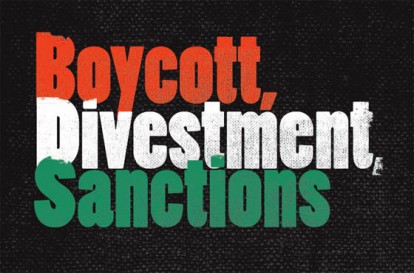 A few weeks after the start of the Iraq war in 2003, I talked to a senior editor at The Sydney Morning Herald and asked her why there were basically no Iraqi voices in the paper, either for or against the conflict. “I never thought of that”, she replied.

Eight years later, we still barely hear or see any Arabs in the Australian media.

I’ve been thinking about this recently during the created “scandal” by the Murdoch press over the NSW Greens embracing boycott, divestment and sanctions (BDS) against Israel, a grassroots Palestinian-led movement now backed by many groups globally.

There have been dozens of articles in the Australian recently calling the Greens “extremists”, implying the party is anti-Semitic, claiming BDS is akin to genocide, extensively quoting the Labor and Liberal parties (who unsurprisingly both condemn BDS) and the Zionist lobby (who again oppose it).

Today there are two more articles in the paper that only feature anti-BDS and Anglo voices and force Federal Human Services Minister Tanya Plibersek to distance herself from mildly critical comments she made against Israel many years ago.

Former Labor MP Julia Irwin was harassed and abused for simply daring to advocate Palestinian rights, as she told Crikey in 2010.

No dissent must be allowed in the Australian Parliament, uniformity of opinion is central to maintain the illusion of unqualified backing for Israel (despite public support moving in the opposite direction).

It’s comical to read today union leader Paul Howes condemn the Australian unions who support BDS as “divisive” when none of those unions are actually heard in the story.

Greens leader Bob Brown has also condemned BDS, in all likelihood because he sees the issue as a risk politically, doesn’t want to take on the Zionist lobby, is not fully across the apartheid conditions suffered by Palestinians under Israeli occupation or isn’t listening to the wide section of the Australian community who have publicly backed BDS (including churches, civil society groups and major unions). Sadly, many of these people have remained publicly silent during the recent onslaught by the Murdoch press, despite being approached for comment.

The media coverage has neglected to mention the reality on the ground in Palestine, including pogroms against Arabs in the West Bank and the rise in Christian fundamentalists wanting to join the IDF and live in illegal colonies.

Palestinians or Arabs have been entirely absent from the discussion. Dissident Jews are nowhere to be found.

For example, the public advocate for Australians for Palestine, Palestinian Samah Sabawi, with a long track record of publishing related articles, has had none of her articles published. Last night’s ABC TV news reported the BDS story and ignored all Arab perspectives.

The Australian, which has led the demonization campaign against the Greens, Fairfax and most of the ABC have either pummelled the issue (in the case of the Murdoch broadsheet, while rejecting counter views) while the others are simply absent from the field. It’s a combination of gutlessness, reliance on the usual (read conservative, pro-Zionist and white) sources and continued refusal to feature the Arab voice.

Then there was yesterday’s story in The Australian and The Daily Telegraph on BDS in Sydney.

Marrickville council decided in December to back BDS and next week a report will be released outlining how the council can implement the policy. Both papers claimed residents of Marrickville would have to pay $4 million as a result of cutting ties with businesses linked to Israel. Mayor Fiona Byrne disputed the figure but this didn’t stop a long line of critics, including NSW Premier Barry O’Farrell, coming out to slam the proposal.

The council is today being threatened with the sack unless it rescinds the plan.

The official council report simply provided only unrealistic and very expensive options and ignored the founding principles of BDS that any successful campaign must be strategic and achievable rather than heroic. The council must clearly take some responsibility for not better explaining and selling the BDS decision. The most expensive suggestions for boycott in the council report (such as Holden and Hewlett Packard) aren’t even a major focus of the BDS campaign.

Like a local council supporting a boycott of Burma – something pushed by Marrickville in years past – local government can continue to pursue BDS without any cost to the taxpayer. What remains vital is the original commitment to BDS and its support for non-violent resistance to Israel’s illegal occupation of Palestine.

Want examples? Sanctions, such as refusing to meet with Israeli mayors (on the rare chance one comes to Marrickville) would cost nothing but have great moral power. Also cultural and sporting boycotts cost nothing and show solidarity with occupied Palestinians.

There are three key lessons from this story. The Murdoch press is determined to obsess over the Greens on almost every day in an attempt to paint the party as a group of disorganised, rabid loons, although internal party divisions over Middle East policy have been exposed.

How was this week’s front-page Australian story about NSW Greens Senator-elect Lee Rhiannon marching at a rally last year with Islamic cleric Taj Din al-Hilali even remotely a relevant story now? The “facts” in the article were known since the event occurred; media coverage at the time revealed all. Yesterday Rhiannon pledged to continue pushing BDS.

The ever-increasing line of politicians and journalists making their sponsored pilgrimage to the Zionist homeland — this week was Sydney Morning Herald international editor Peter Hartcher, “reporting” from Tel Aviv; he’s a repeat offender, as I wrote in Crikey in 2009 — furthers throws the coverage into question.

BDS is now a major topic of discussion in the Jewish community and mainstream media in mature democracies, unlike ours.

The Australian media is revealed as a parochial bunch that prefers to mostly give air-time to white men from think-tanks, academia or the press (there are some exceptions). Today the Arab world is alive with new and exciting voices and yet where are the Iraqi, Afghan, Libyan, Egyptian, Tunisian, Palestinian or Syrian voices in our press, in their own voices, not filtered through a Western reporter’s lens?