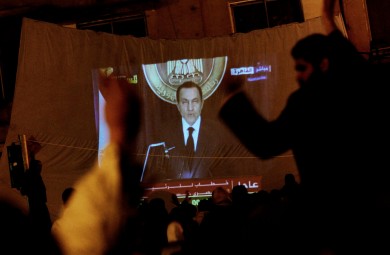 Australia has told Egypt’s embattled leader the time for political change has come.

Prime Minister Julia Gillard on Thursday issued her strongest statement yet on the political unrest gripping the country, indicating she was not satisfied with President Hosni Mubarak’s pledge to step down later this year.

“The time for that transition has come.

“We want that transition to be peaceful and orderly.

“It is up to the people of Egypt to shape their future but the time for change has come.”

Fresh violence erupted on the streets of Cairo and other major Egyptian cities after Mr Mubarak declared he planned to stay in power until September elections.

“I want to stress that we believe the government of Egypt has to acquit its responsibility to keep people safe and it has to acknowledge the right of people to peacefully protest.”

Close to 200 Australians arrived in Germany on Thursday (AEDT) after escaping Cairo on a government-chartered evacuation flight.

The Qantas 747 had been expected to pick up about 400 people. But Melbourne couple Peter and Penny Duncan, who were on the flight, said people who had wanted to leave had been left behind because of a “miscommunication” by Australian officials.

They had met at a downtown hotel at a scheduled time but officials had failed to get them to the airport in time, Ms Duncan said.

“They are still stuck in the middle of Cairo.”

But a spokesperson for the Department of Foreign Affairs and Trade (DFAT) said everyone who had wanted to be on the plane had been on it.

“No one was left behind in the hotel,” the spokesperson said.

Some people had registered for the flight but later decided to stay in Egypt, DFAT said.

A second evacuation flight will depart Cairo for Frankfurt on Friday, Australian time. More than 200 people have told DFAT they intend to be on it.

Foreign Minister Kevin Rudd warned the coming days would be difficult and dangerous for Egypt.

Longer term, the challenge would lie in preventing radical Islamists gaining influence in the country, he said.

“Events in Egypt and elsewhere in the Arab world also have potentially profound implications for the Middle East peace process.”

The United States on Thursday pressed Mr Mubarak to move “farther and faster” on handing over power.